GOP gets "sensible" on immigration

Meet the Texan who's pushing his party to moderate its stance, with surprising success 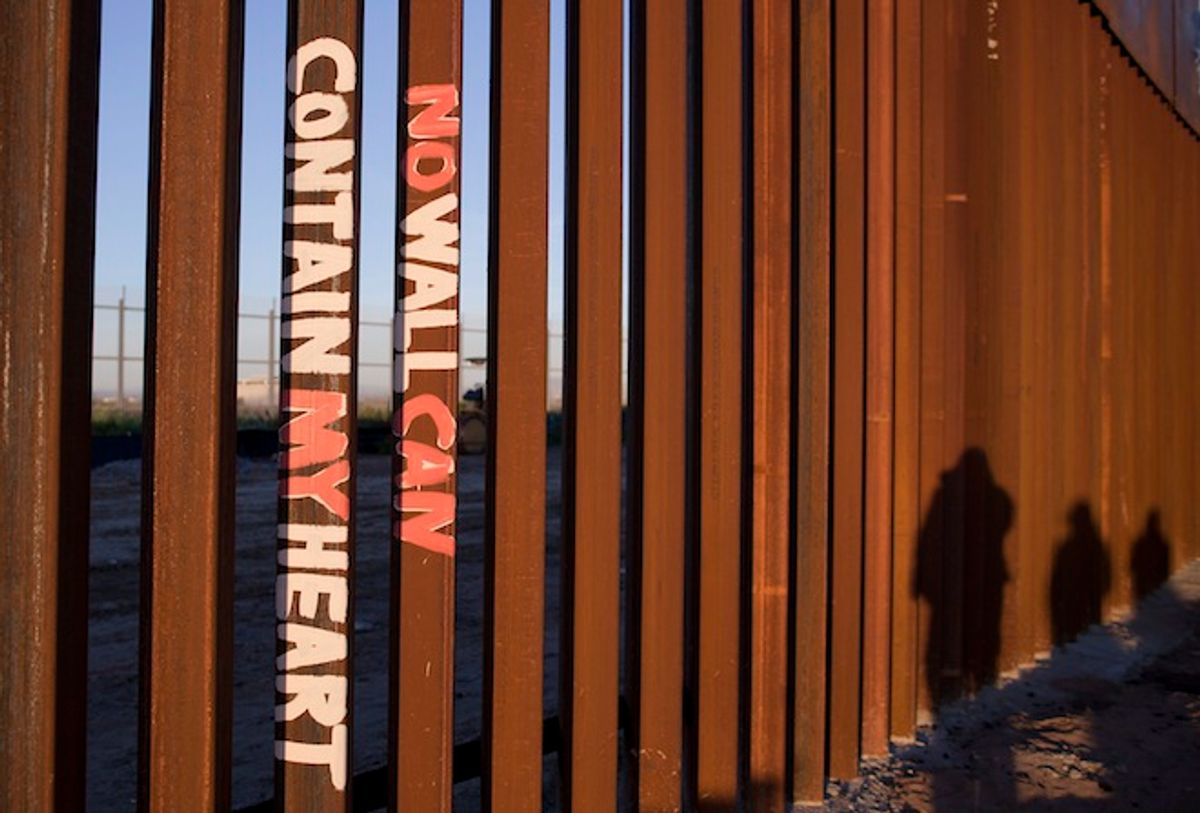 This Saturday, Jan. 28, 2012 photo shows graffiti reading "NO WALL CAN CONTAIN MY HEART" on the U.S. border fence in Tijuana, Mexico. (AP/Julie Jacobson)
--

TAMPA -- Tuesday was a good day for Republicans concerned about their party's rightward drift on immigration: The GOP officially adopted a platform that included a guest worker program for the first time its history and Russell Pearce, the sponsor of Arizona’s controversial anti-immigration law, lost by double digits in a GOP primary. The two events made it “a historic day for Republicans," said Brad Bailey, a delegate from Texas who led the charge to insert the guest worker language.

In the power struggle within the Republican Party for control of the politically important and emotionally fraught issue of immigration, Bailey has positioned himself as the anti-Kris Kobach. Kobach, the Yale-educated secretary of state of Kansas, though largely unknown to the outside world, has become the party's leading voice and advocate on immigration. He has advised Mitt Romney's campaign, helped write the hardline immigration laws in Arizona and a half dozen other states, and succeeded in adding his own language to the party’s new platform.

But Bailey, the co-founder of The Texas Immigration Solution., who successfully pushed his state’s GOP to adopt a guest worker plank earlier this year, told Salon Wednesday on the sidelines of the Republican National Convention that he thinks his side is finally beginning to turn the tide. "I think you're starting to see Republicans say, okay, we've heard Kobach, and Governor Brewer, and Sheriff Joe's rhetoric on this for five, ten years, and has the problem gotten better? No, the problem has gotten worse."

At the Texas state convention, which has more delegates than the national party’s, the guest worker plank was challenged five times on the floor, but each time it passed with "overwhelming support" and was officially adopted. “Everyone told us there’s no way you’re changing the platform. There’s no way. I mean, this doesn’t say ‘illegal immigrant’ in it anywhere, it says ‘undocumented immigrant,’ there’s no way that’s going to happen in Texas. But we did it,” he said.

If it could happen in Texas, the deeply conservative red state with 2,000 miles of border with Mexico, it could happen anywhere, Bailey and his partners thought, so they took their movement national. In traveling to DC to meet with party officials, and to Tampa, where Bailey chased members of the Platform Committee on their way to the bathroom to steal a few moments because he was not on the committee, Bailey said people were surprised to hear what happened in Texas. "That woke up a lot of people. They were like, wow, there's a lot more support for this than originally thought. The vocal minority is so loud, and they get so many press interviews, that they've highjacked the issue," Bailey said.

“I think Republicans in general are just getting tired of the rhetoric and the hatred language and what they’re really looking for is solutions,” he said. Art Martinez, the mayor of San Antonio suburb Von Ormy, who has also been a leader in the reform effort, acknowledged the problem as well. “I think part of the issue is when folks like Sheriff Joe and Kobach speak, and the rest of the Republicans remain silent, it allows the opposition to paint them as representative of the whole party, and they’re clearly not.”

While some leaders in the party like former Florida Governor Jeb Bush have called on the GOP to adopt softer language on immigration in order to court Hispanic voters, Bailey and Martinez see this as primarily about policy and economics.  "I'm a restaurateur … so I'm at, what I call, the ground zero of immigration,” Bailey said. Martinez said his city encounters problems with today’s broken immigration system “every day.” Indeed, the politics of the Hispanic vote didn't even come up in our conversation for almost 15 minutes.

The reformers actually see their position as the more conservative, free-market oriented approach. "In contrast to these Arizona-style proposals, it's not big government, it doesn't expand the government's police powers, it's very much in line with Republican values of private sector, limited government and individual liberty," Martinez said. Indeed, there's plenty of evidence that Kobach-style laws have hurt the economy of the states in which they’re implemented, especially Alabama, where crops were left to whither on the vine for a lack of agricultural laborers.

Asked about Romney’s very restrictive immigration stance, Bailey said he’s tried to speak with the nominee, so far unsuccessfully. “I’d love for Governor Romney to come down and talk to us about it, because I think he’d see a different scenario. I think, unfortunately, during the primary ... on immigration, the rhetoric was flowing amongst all the candidates, but you’ve since seen him back off,” Bailey said. Kobach has also avoided a confab. “I gave him my card, but...” Bailey said with a laugh.

It’s unclear whether the party can turnaround overnight, and guest worker program isn't as far as many observers would like to go, but considering the dominant conservative rhetoric on this issue of the past few years, as Bailey said, “it’s exciting to see that, finally, another voice is being heard."