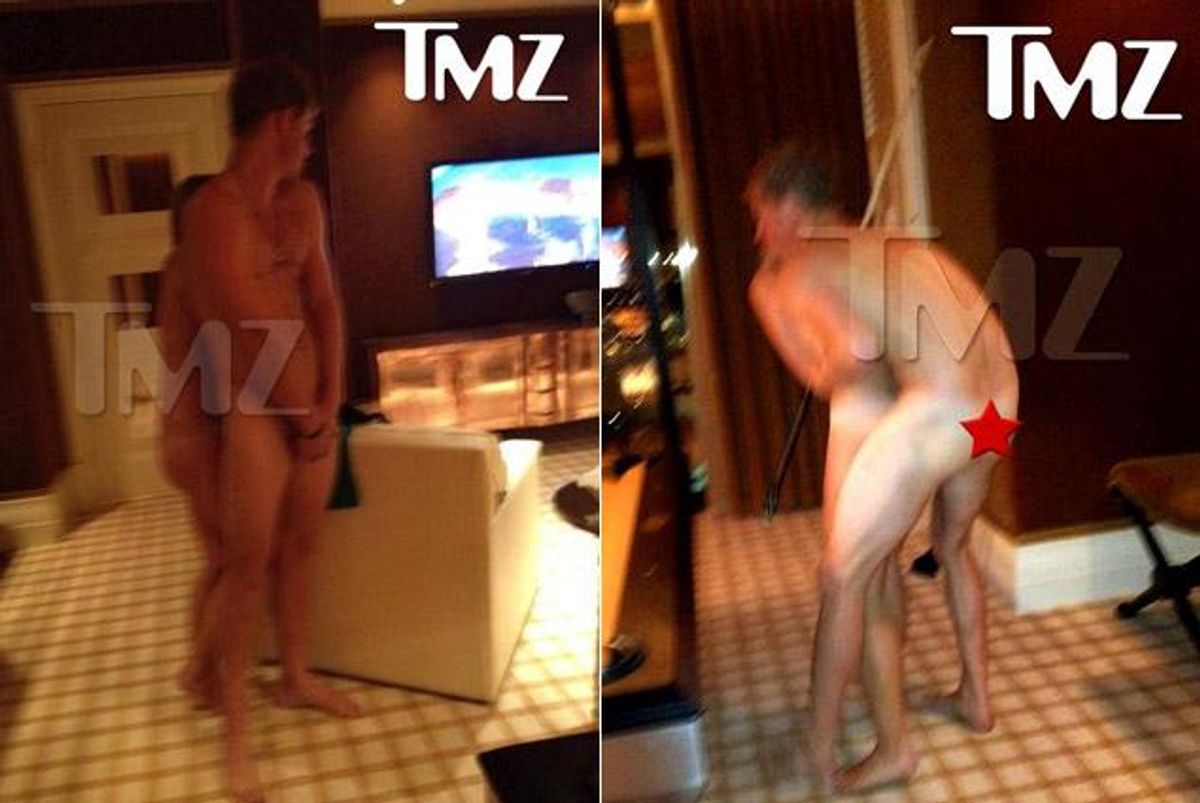 If you've happened upon any tabloid media over the past week, you've likely seen the scowling, scolding headlines about Prince Harry's "wild night in Vegas." The shock and awe directed toward the now 27-year-old son of Princess Di was not necessarily about his "wild night," however, but directed in particular towards photos leaked by some of his comrades during a night of nude billiards. Of course, it was such a scandal—Harry's whole life seems to be about having the absolute minimum amount of decorum expected of him as a royal -- but one can imagine the collective gasp heard 'round Buckingham Palace when his naked butt landed on the Internet. But the typically Victorian horror from the royals brought to light a valid question for Americans, who were ostensibly untethered from the Queen's morals 200 years ago: why are we so freaked out about sexting? Why are we so freaked out about Internet nudes? And does our fear of the union of the naked human body and technology create an environment where bad-news exploiters (like "revenge pornographer" Hunter Moore) can thrive?

America's longstanding puritanism is no secret—as a society we are appalled by the human body. Over 500 years after Botticelli painted that sumptuous nude Venus, Americans tend to muster a disproportionate, regressive outrage over far less sexual representations of anatomy. As recently as last week, an artistic nude was censored in Atlanta, as though it revealed some secret and more salacious body part, instead of the ones half the population possess. Transmogrify the nude painting into an artistic photograph, however, and we find far deeper reasons to object: the work of Robert Mapplethorpe, whose nudes were artfully lit and often posed to mimic (also nude) Greek sculpture, is still a point of controversy 22 years after his death.

In our accelerated reality, it's not too much of a stretch to say that cameraphone nudes, floating on the Internet, are part of the lineage from Botticelli to Mapplethorpe. Maybe they do not generally possess the same level of skill as those greats, but cell pics continue the tradition of capturing the human form in new and strange lights, in ways that reflect a moment in time. Self-captured cell phone images, whether meant for preservation or for stimulation, are perhaps unwittingly part of our new media art flow, where Instagram acts as a conceptual, real-time gallery, and can even be reversed onto canvas. And while Prince Harry was, it seems, leaked without consent, a gross violation, the blurry images of his body, netherparts covered by a hand like Venus de Milo's strategically placed golden locks, are as reminiscent of classical sculpture as anything.

Does that all sound lofty to you? Perhaps, but maybe it's time to re-evaluate our thinking on the sext, which inspires incessant hand-wringing and yet is simply a microcosm of America's freaked-out existence. Harry's a 27-year-old man, old enough to know what the hell he's doing, but the shame culture drummed up by his photos sends a very direct message to rebellious teenagers, who adults worry about the most. The shaming says: your nude body is illicit, it is pliable, yet it is a way to get attention. The conflict of the shaming is what we should be worrying about most, as the root issue of sexting that ends up on Web sites and ruins high school reputations.

Americans need to radically rethink the way we approach nude images sent through social media. We look at cameraphone nudes as an extension of porn culture and an inevitable effect of our technology-era voyeurism, and sometimes they are (I am still mad at gossip blogs for exposing me to halfway up Amber Rose's coochie, but that's a personal matter). But if we reframe them as an extension of new media art, can we use them as a lesson to stop the endless cycle of feeling bad or moralizing nakedness? More importantly—by changing our reaction to leaked nude cell photos, to something approaching bemused disinterest rather than fixated shock, can we help the selfsame teenagers we fear sexting, feel more comfortable and confident about their bodies and in their own skin?

It's certainly a hypothetical—it will take a lot more than feeling okay about naked TwitPics to erase hundreds of years of Judeo-Christian finger-wagging. But increasingly, as LEAKED NUDE PHOTOS are top Internet click fodder, and technology offers us more and more ways in which to expose ourselves, maybe LEAKED NUDE PHOTOS are not the problem, but part of the solution.