It was every reporter's challenge at the RNC: How do you engage voters when their politicians tell outright lies? 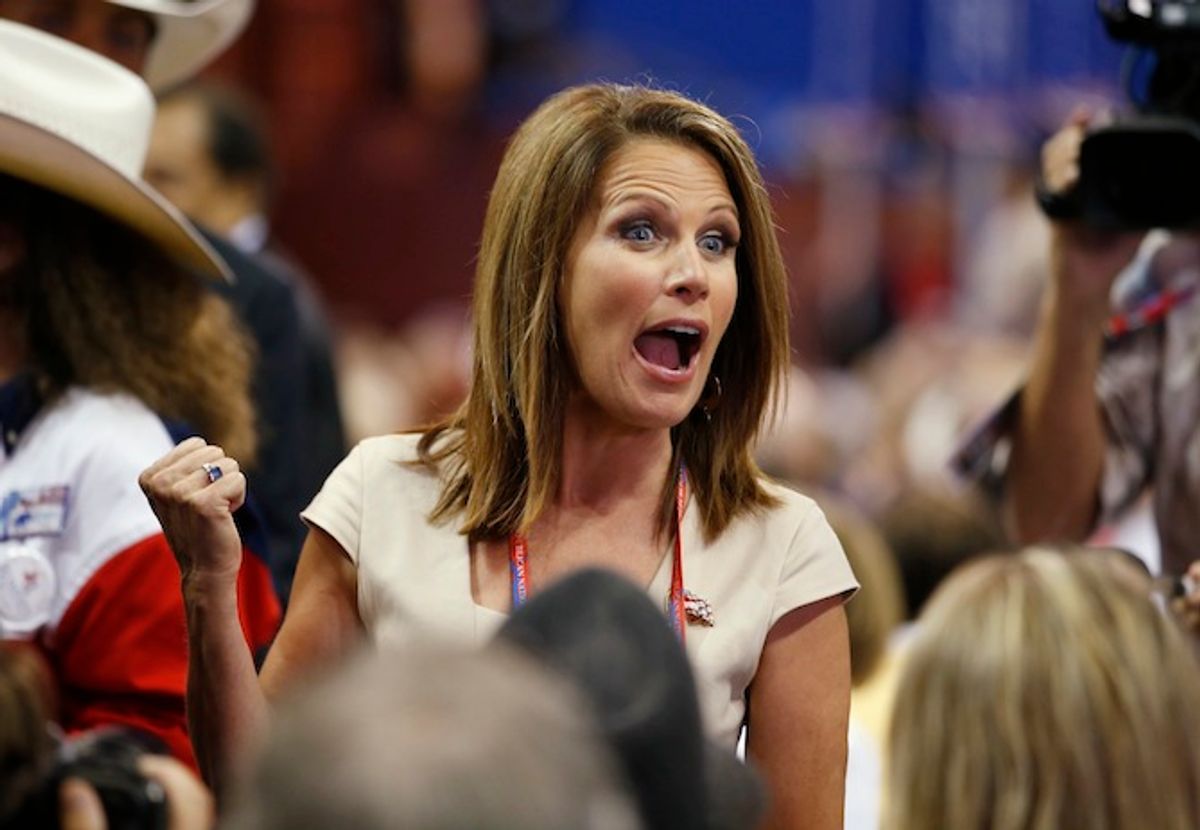 "Eve ate the apple," said Kathy Berden, "and that's our lot in life."

We were sitting just outside the Tampa Bay Times Forum minutes after Mitt Romney spoke at the Republican National Convention Thursday night, and Berden, a grandmotherly delegate from Michigan, was talking about Ann Romney's declaration that women's lives are a little harder than men's. Berden agreed with Romney about that, and also, apparently, that it wasn't government's role to do anything about it. She'd told me that we'd been hearing so much this week about women because while "Democrats pander to women on reproductive rights, Republicans really respect women as joint partners."

I was surprised to hear her use the phrase "reproductive rights," which I'd never heard a conservative use. Berden blamed it on seeing Sandra Fluke on TV all the time, volunteering with a chuckle, "She's a grown woman, we shouldn't have to pay for her stupid birth control. She could cross her legs."

"She did so," Berden persisted. "She said that she couldn't afford as a student to pay for birth control. She said that. I heard her."

She didn't. That was what Rush Limbaugh said she said, though.

A convention is not a debate. It is not a place in which fundamental worldviews are challenged and earnestly defended. I knew that going into the RNC this week, but I ended up trying to do it anyway, even over small, telling matters like what Fluke actually said.

That wasn't the plan, of course. I'm a reporter covering women and politics and culture. But in a welcome freedom afforded by the Internet's potential for full disclosure and genre complication, I've stopped pretending I don't think that some policy ideas about women's lives have more merit than others. And though being a "truth vigilante," whether to someone's face or in writing, is a tricky maneuver, it felt depressingly necessary at the RNC, whether the conversation was about the gender gap or Paul Ryan's speech or Obama's nationality.

In the middle of the week, two of the most hardworking and plugged-in journalists in the business, Slate's Dave Weigel and Buzzfeed's Ben Smith, did a chat for New York magazine about the "We built that" theme. Weigel pointed out that at least one (and later more) featured businessperson there to rebut "you didn't build that" had relied heavily on government contracts. He added, "The entire theme of the night was 1) based on a sort of misrepresentation and 2) untenable."

Smith responded, "I'll actually take 3) rooted in a real argument about the role of government, if drawn in a bit of caricature for an election year ... But I don't see why everyone has to go around yelling 'liar' whenever a political candidate puts things in fairly stark terms."

But that supposed "real argument" required selective editing of a clumsily worded argument about infrastructure. It required believing that all this was tantamount to the president saying you don't deserve any of what you have, though I never heard a single policy decision or position cited to support the repeated suggestion that Obama is a wild-eyed post-colonial socialist, only vague platitudes about small businesses and self-reliance. As Salon's Alex Pareene put it, it was a disagreement between one party and a straw man. It's not that the philosophical differences don't exist, if only incrementally in practice; it's that the premises of the official Republican argument were laid in bad faith.

There are two reasons, I think, why more journalists don't generally go around yelling "liar" when it's manifestly necessary. One is a form of cynical postmodernism: Who knows what's true, anyway? It's all a game, everyone will always misrepresent in addition to just disagreeing, but how good were they at it? Another is more practical: Will any Republicans talk to me after I call them out?

Well, would they? I'd already called them out before I got to the RNC. What would it be like in person?

Of course, the delegates and assorted activists weren't wrong to be wary of gotchas and caricatures, what with all the restless and bored reporters helplessly trawling for a traffic-friendly nugget, waiting for them to say something crazy. The problem is, they kept saying things that were crazy, if by crazy you mean not based in any empirical reality.

"Planned Parenthood is spending a million and a half tax dollars a day on abortion," Ginger Howard, a Georgia delegate, cheerfully told me at the Focus on the Family lunch. (No, it's not.) Of course, this was just before Michele Bachmann declared, as she has before and would go on to repeat several times in the week, "that for the first time in human history we have full taxpayer funding of abortion." It may be subjective whether Obama is "the most anti-woman" president ever, as Bachmann said, but Obama has changed nothing about the status quo on abortion funding (much to the dismay of abortion-rights activists).

"Where does that come from?" one of my colleagues asked me as we trudged back to the parking garage in the baking heat. "I mean, it must be based on something."

"It's based on nothing," I said, unless you think that requiring private insurers to cover birth control counts as "taxpayer-funded abortion."

Two days later at the Salute to Pro-Life Women, when I asked what Obama had done to upset the status quo on abortion, Floridian Rosemary Hurley replied, "Well, Obamacare covers the abortion pill." I asked her what she meant by that. "You go to a clinic, the doctor gives you two pills, then they're -- how do you say it -- abortifacient," she said. I had to tell she was describing a chemical abortion, which is not required to be covered under the Affordable Care Act. Emergency contraception is covered if prescribed by a doctor, and that undocumented possibility of blocking a 3-day-old egg from implanting is different from how most people imagine "abortion."

"I hope you're right," she said placidly.

I understood why these Republican women were so frustrated at being told the party was waging a war on women. That, at least, was an issue of fundamentally different worldviews. Once you stop conceptualizing abortion and access to contraception as a woman's right in favor of talk of protecting innocent life -- the overt focus of anti-abortion events all week, with only brief expressions of concern for pregnant women -- the "war on women" is simply baffling.

It was clear that most of the delegates, men and women, would have preferred to keep criticizing Obama rather than fight on what's so far his territory. But because of a gender gap in the polls, the week unfurled as a desperate declaration that the Republican Party welcomes women. In practice, it went like this: Here are some women who are Republicans, one of whom is married to Mitt, some of whom are in office. Look at all these women! And I'm a woman! And how could we hate ourselves? This was the beginning and the end of the argument, implying that simply recognizing a disparity, even if you think it's immutable, should somehow be rewarded.

These mostly well-off, overwhelmingly white women, politically active and personally successful, saw nothing in their own experiences to disprove their belief that any difficulties American women face are a matter of individual responsibility or biological fact, rather than structural inequality that can be tackled -- whether through the ability to control your fertility or through workplace protections.

Take Pam Bondi, the Florida attorney general, a convention speaker who also spoke at the same lunch where I met Hurley. She complained in her speech that as the only woman suing the Obama administration over the contraceptive mandate, she had been subject to particular criticism. A few minutes later she said, "There's no such thing as a glass ceiling." Afterward, I asked her about what sounded to me like a contradiction. Was she saying she'd been subjected to sexism?

"I think the media singled me out because I was the only woman in the lawsuit," she said. Was that, I asked, evidence of a glass ceiling?

I get not wanting to wallow in victimization, but this was politics as mere positive thinking, in a vacuum. It reminded me of Jackie Hinton, the black lesbian conservative I profiled, who said she didn't feel discriminated against because she'd worked at big companies that valued diversity and were afraid of getting sued, seemingly unaware that conservatives generally detest the legal and political frameworks behind both those values, and that they were implemented through specific legislation and policies.

Women's lives have been improved by those government actions, from the ability to control our fertility to legal redress from discrimination and protection from gender-based violence. They've worked well enough to seem invisible to these women, to render any disparity a matter of personal failing.

The week's lineup might have made it hard to believe, but women are still dramatically underrepresented in politics -- men make up about 84 percent of the U.S. Congress, are governors of 44 of 50 states, and are mayors of 92 of the 100 biggest cities, according to a Women in Politics Institute study this year. But if there was a single point no one on either side of the aisle disagreed on, at least on the face of it, that week, it was that women in public life is a Good Thing. Arkansas delegate Susan Gessler told me she was proud to see so many of them that week, that she was going to volunteer for an organization to get more conservative women in politics.

If it matters to you that there be women in public life, I asked her, why do you think there are so few of them? If you think success is so wholly based on individual achievement, does that mean that women just aren't good enough? If all "doors are open," a phrase she used, why aren't women walking through them? "I don't know," she said.

Kathy Berden thought she had an answer to the same question: Childbearing. "But if you can afford good childcare and you want to do it -- certainly a lot of these women [onstage] did, god bless 'em." And if you can't afford it? Should the government do something about that? "Every family's different," she said, and went back to boilerplate about small businesses.