But don't be fooled: Republicans aren't just nostalgic for 1950s-style social barriers. They want to rebuild them 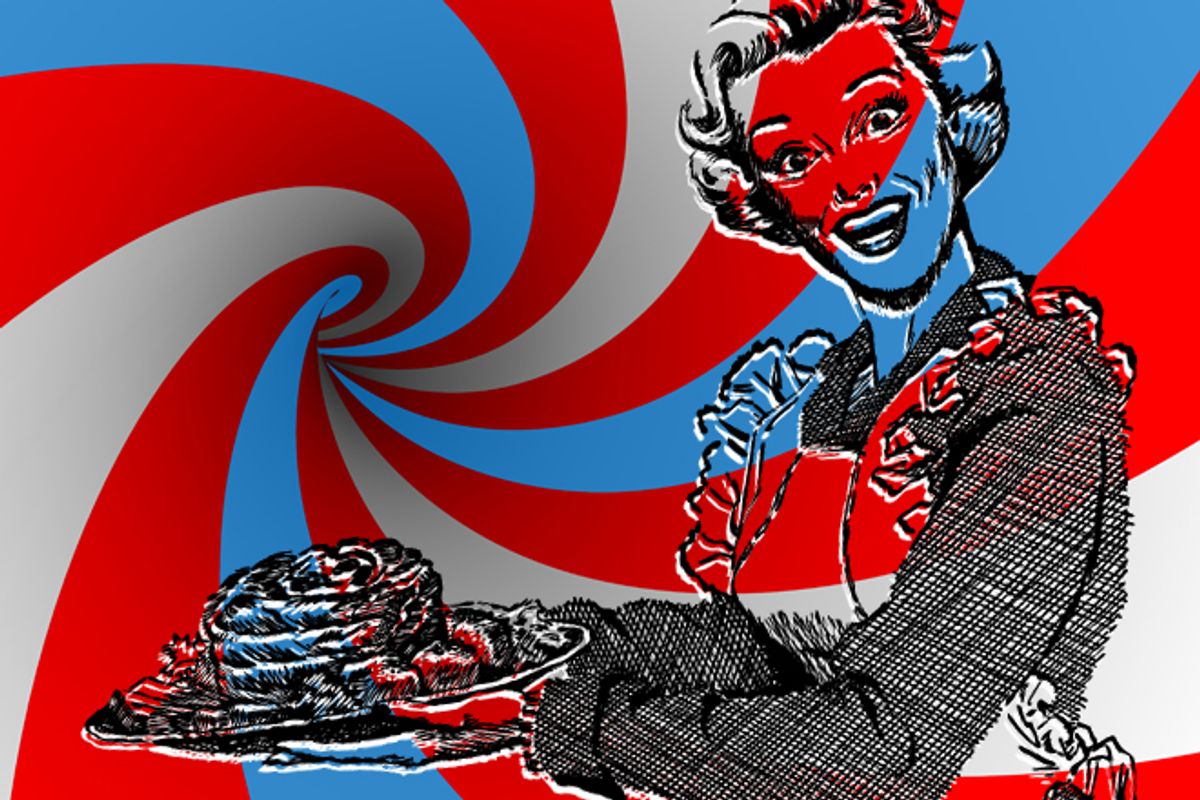 Among the most unvarnished sentiments expressed at the Republican Convention in Tampa this week was the disregard for the Obama campaign’s 2012 slogan, “Forward.” The derision of propulsive movement was perfectly appropriate for Republicans, who this week drew a bright, unmistakable line around a desire that has been getting ever clearer in recent months.

What the right wants, and what they tried to build for themselves in Tampa, was a time machine.

Republicans are panting for a tricked-out DeLorean that can take them back! Back in time! To a period when the power structure was fixed and comfortable, when there were no black first ladies or black camerawomen, when loud Jewish ladies were not in charge of national political parties, back to a time when only a select few – the white, the male, the straight, the Protestant – could reasonably expect to exert political or financial or social or sexual power.

The desire to chronologically reverse our nation’s history has been the undercurrent of the 2012 election cycle and its primary debates; it’s barely been disguised in the agenda of John Boehner’s House or in state legislatures around the country.

The mission to drastically curtail women’s reproductive rights, taking aim not just at abortion but at birth control; the blocking of the Paycheck Fairness Act; objections to expanding the Violence Against Women Act; crazed locutions about rape and sluts: In word and deed, conservatives have been telegraphing their hope to return us to a moment not just before Roe, but before the birth-control pill, before the sexual revolution, before second-wave feminism hammered pesky terms like “harassment” and “equal pay” into our lexicon, to a moment when women’s bodies and sexuality and identities were men’s to define, patrol and violate at will.

The state-by-state assault on voting rights, a dizzying array of propositions designed to keep brown and black people, poor people and young people from the polls? This too is an attempt to turn back time, to return the country to a moment before the Voting Rights Act of 1965 helped ensure safe enfranchisement for African-Americans.

For many months, we have been watching a lengthy, multi-tentacled attempt to shut tight doors that were opened by the social movements of the mid-20th century, to push back those who have apparently gotten their hands on a little too much power, by aiming back toward a time when men were white, women were long-suffering vessels, and black men were definitely not president.

But if time travel has been an understated drumbeat of the past two years of Republican machination, in Tampa, it was conveyed with all the subtlety of an AC/DC riff from Paul Ryan’s iPod.

First there was the swooning over the Greatest Generation, the fetishistic shout-outs to hard-laboring forebears, Welsh coal-mining grandfathers and Breyer’s Plant employee dads. Speakers were presenting us with visions of men who lived in an earlier America and the women who sacrificed their own passions (as Mitt Romney recalled of his mother, who gave up Hollywood) to marry them, move to Detroit and raise their babies while the men embraced success and made money.

None of the stories of ye olde American achievement actually jibed with the convention’s “We Built It” theme. The tales were of white men whose class mobility and moon-walks were boosted by G.I. Bills, state-school educations, government-funded space programs and unions. These guys and their unconditionally loving wives were part of a white American middle class that was able to expand thanks to the kinds of post-Depression financial regulations and government-goosed infrastructure and housing programs that modern Republicans are keen to obliterate.

But the incoherence of message didn’t matter, because what all these stories were really flicking at wasn’t the size of the government, but the whiteness and the maleness of those who were helped along with their businesses and wealth and broods of straight-parented families. Just listen to Romney's assertions about this "nation of immigrants" who came here seeking freedom, a sentiment that is both disingenuous from someone who wants this nation's current immigrant population to self-deport, and that does not even bother to acknowledge those Americans whose forebears were brought here against their will in an exercise of freedom's opposite. Romney didn't include those people because they don't exist -- in a meaningful, threatening way -- in the America Romney and his party are trying to bring back.

The keening desire to be back there, to be back then, was responsible for the presence of Clint Eastwood, an actor who came to prominence as a star of the cowboy show “Rawhide,” which aired from 1959 to 1965. People may disagree about whether Eastwood’s vertiginously awful appearance at the RNC on Thursday was intentionally aggressive or just loopy, but there’s no question that his creepy intonation of the phrase “We own this country” came off like a segregationist-era, George Wallace-inspired catchphrase – one the crowd went wild for.

It was a terrible exclamation point on a week in which an RNC delegate threw peanuts at a black camerawoman from CNN, crowing that “this is what we feed animals,” and in which a Republican retiree describing her preference for Ann Romney over Michelle Obama told NPR, “It’s about time we get a first lady in there that … looks like a first lady.”

Meanwhile, as Republicans vehemently affirmed their love for women – see Ann Romney’s enigmatic proclamation, “I love you, women!” – they presented a version of femininity mostly recognizable to contemporary eyes by its dental records.

Ann Romney’s speech was filled with maternal memories – like about how she often felt responsible for raising not just five rambunctious boys, but six, counting her purportedly adult husband – that might prompt a reasonable person to offer her a Valium and a nap. While Mitt, for his part, opined unctuously about how “the job of the mother” was more important than his own, but didn’t offer any explanation as to whether there was a “job of the father” or why, if his wife’s “work” was so much more important, he didn’t offer to help her more, nor did he offer insight as to why Republicans don’t offer these crucially important workers (mothers) any support.

But again: He didn’t need to. What he and Ann were selling was not a contemporary tableau of family life, but a comfy vision of women as mothers whose natural role in life involves, as Ann said, “sighing a little but more than the men; it’s how it is.” Or was. In the 1950s, when the kinds of women Mitt Romney and Ann Romney know were trapped in domestic spaces, encouraged to make the kind of latticed peach pies that one of Romney’s daughter-in-laws told the Boston Globe intimidated her when she first joined the family.

What the Romneys were celebrating was not even just some kind of he-wears-the-pants-she-wears-the-apron gender essentialism, it was actually gender inequity, in which a Cult of Domesticity kept potentially powerful (i.e., white, middle-class, educated) women out of the public sphere by elevating their unsupported, unpaid labor in the domestic sphere, and scared them into not challenging their male mates. For proof that this was the era whence Republican gender rhetoric came this week, look no further to that interview with the Romney daughters-in-law, in which one remarks on how Ann taught her how to be a good wife by cooking, supporting her husband and remembering to “not always weigh him down with all of the little hard things that happened during the day, but to be positive.”

So that was 1958, and back on earth, Republican attitudes toward the kinds of disruptively powerful public females who exist in 2012 could be heard above the choked-up odes to Republican Motherhood. On Wednesday night, Mike Huckabee made a joke about the “awful noise” made by Florida Rep. Debbie Wasserman Shultz, a crack that was a little misogynist, a little anti-Semitic and thoroughly anachronistic. Then there was the clapping glee with which conventioneers greeted Eastwood’s vision of Oprah Winfrey (whose cadence and style was an obvious model for Republican speakers) crying over Barack Obama’s 2008 victory. Weeping black ladies and yawping Jewish broads were, apparently, other kinds of women. Not the kind that Ann Romney loves.

It was so obvious that the only real-time energy, the only contemporary vibe at the whole convention came from people who would not have appeared at a Republican (or Democratic) convention while “Rawhide” was still on the air. The most electrifying (and even competent) speeches came from Marco Rubio and Susana Martinez, Condoleezza Rice and Nikki Haley.

These speakers also asked the audience to cast their minds back to an earlier time; they spoke of parents, grandparents, of an earlier time in our country’s history. But by dint of their particular stories – of immigration, segregation, gender discrimination – the lens they cast on our recent past showed the inverse of white America’s hunger for the bygone exclusivity of dominion. Through them – and only them – could we see the forward motion of the nation, and not simply the backward wishfulness of a party and a power structure in decline.

Make no mistake: The policies put forward by Martinez, Rubio, Rice and Haley have nothing to do with the progressive social movements that helped carry them to the Tampa stage. But it was no coincidence that they were the stars of the show.

No matter their regressive stances, the fact of their power means that on some level they represent – they are – the tide of enlightenment, social progress and simple time-pass – against which their party is so determined to row.