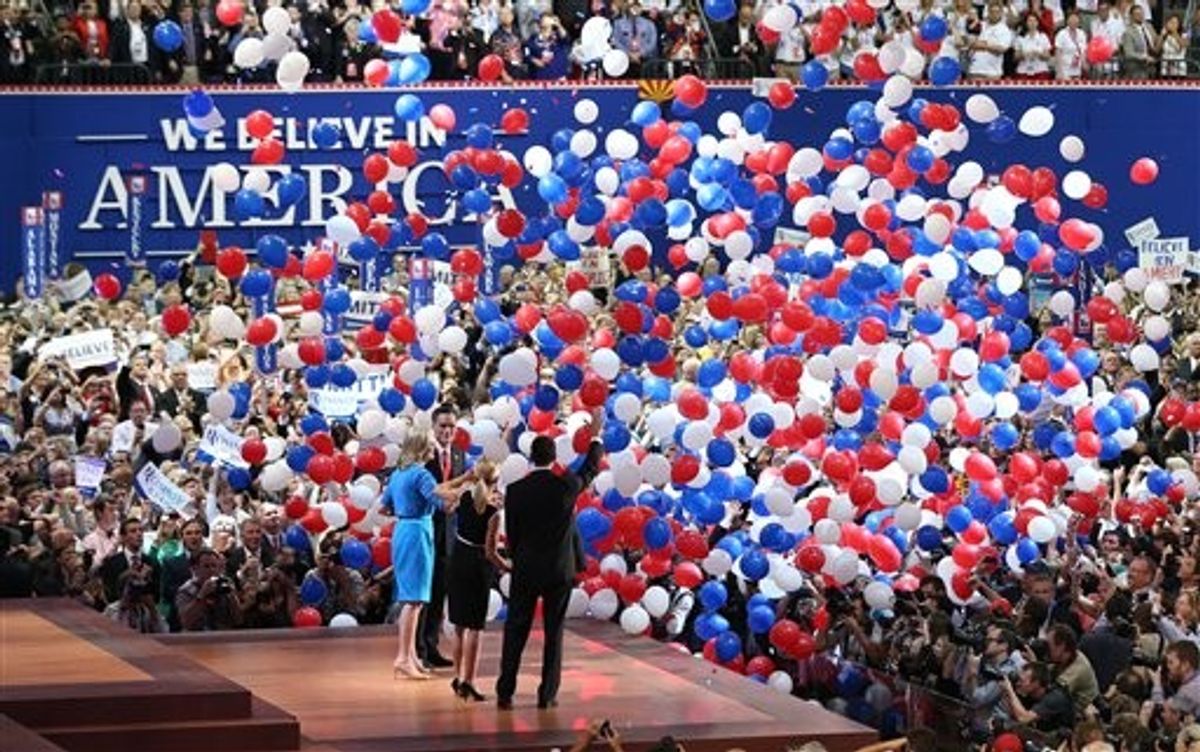 This year’s Republican Convention wins the prize for most conflicted message. Half the time, the convention was devoted to assuring those elusive swing voters -- who needed assurance that Republicans really aren’t all angry old white men who hate women and minorities and would close your plant in a blink of the eye if they could make a nickel on the deal -- that Republicans in general and Mitt Romney in particular were inclusive, caring, nurturing patriots. The other half of the time, it was devoted to bashing President Barack Obama for his anti-American agenda, an agenda the Republican base has fabricated out of its own paranoia.

Because it is effectively all white, the GOP is compelled to send out a revolving door of minority pols and businessmen to affirm the party’s nonexistent multiracial bona fides. Because it denies women’s reproductive rights and fears their sexuality, it must trot out a phalanx of female officials. Because it seeks to deport undocumented immigrants brought here as children, it must affirm the nation’s immigrant roots. Because its economic policies favor the rich, every speaker must assure listeners that his parents or her grandparents or their great-uncle twice removed once hauled coal without a bucket in the world’s dankest mine. And because Mitt Romney is a private-equity guy more comfortable with numbers than people, we must hear -- from his lips and dozens of others -- that he’s been a great dad, grandpa, husband, son, co-worker, neighbor, sports fan and uncle. Indeed, Romney’s acceptance speech was as much a self-testimonial to his domestic virtues as it was case for electing him president.

Romney also ventured the more-in-sorrow-than-in-anger approach to attacking President Obama. He wished, he said, that Obama had succeeded. If he did, he was the only person in that Tampa arena (press gallery excepted) who felt that way. Mitch McConnell certainly didn’t feel that way when he marked Obama’s assumption to office with the observation that his chief goal would be to ensure the president’s defeat. Fox News didn’t feel that way when it hired Glenn Beck to fan the right’s paranoid fantasies about Obama. (Not all the press gallery is excepted.) The Tea Party and the Birthers didn’t feel that way. But the myth that the Republicans were willing to meet Obama in the middle had he not veered to the left is one that Romney’s handlers must believe works with the 10 or 12 swing voters still out there.

When it wasn’t assuring the swingers and faking its tolerance, however, the convention came alive in its hatred for Obama and the Democrats. Gentle and savage, Ann Romney and Chris Christie, whom to believe? (You can see why the convention planners originally had scheduled them for different nights.) But it’s only when you read the party’s platform that you can grasp just how radical, how Ayn Randian, today’s Republican Party has become. We know about the misogyny and the mistrust of this global-warming business (and Romney’s comment that Obama was attending to the planet when he should have been attending to America’s families illustrated the depth of the party’s science denialism). But buried in the platform is also the most anti-worker plank since Lord knows when. The plank commends those Republican governors who ended the collective-bargaining rights for public employees and the ability of their unions to collect dues from them through automatic paycheck deductions. It calls for a national right-to-work law, which would keep unions from collecting dues from the non-members it bargains for when it’s time for the contract to be renewed. Basically, the plank is a death sentence for American unions, at a time when they’re already so weak that the share of corporate revenues going to wages and benefits is at its lowest level since before World War II.

But these are the specifics of the Republicans’ agenda, and the one thing the convention was devoid of was specifics. Romney vowed in his speech to reduce the deficit, but he’s never said what massive cuts he’ll have to make to bring the deficit down while cutting taxes, as he proposes, on upper- and middle-class Americans. Paul Ryan favors voucherizing Medicare, but rather than even mention that, he attacked Obama with fictitious allegations that it’s the president who wants to scrap it.

A certain amount of falsehood is expected in politics, but Republican conventions are turning more and more into pure charades. The television image they seek to convey is that of a photographic negative (I’m being pre-digital here): An all-white crowd, an all-white party, comes off darker than it is; a party of plutocrats passes itself off as plebeians; and the most radical major party of the past hundred years speaks in dulcet tones. Except when it doesn’t, when it cries out for blood.

Harold Meyerson is Executive Editor of the L.A. Weekly, where this article also appears.