Warhol soup cans at your supermarket!

Starting this weekend, Campbell's will be releasing over 1 million limited-edition cans in tribute to the artist 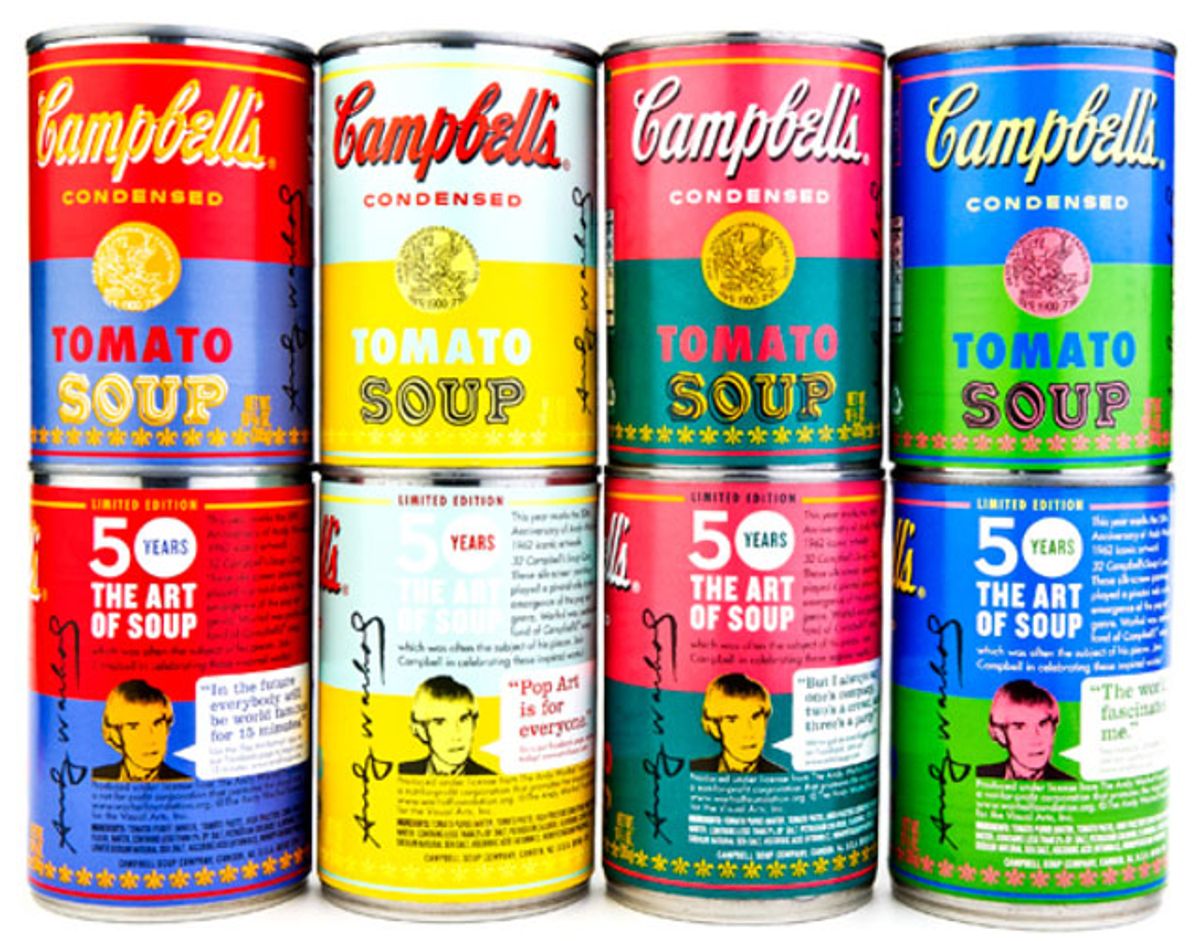 It only took 50 years, but Campbell’s is finally paying tribute to pop artist Andy Warhol and his game-changing paintings of their soup cans. Starting this weekend, the company will release 1.2 million special-edition cans with Warhol-inspired labels, although in this case that mostly just means brightly colored, with a picture of the artist on the back. The promotion marks the 50th anniversary of the exhibition where Warhol first showed this soup-can paintings, at LA’s Ferus Gallery in 1962.

The Huffington Post reports that the soups will be sold at Target for a meager 75 cents each! That’s lower than the price of a regular can of Campbell’s soup — so pretty much the opposite of how limited-edition products are usually priced.

I’m not positive, but I think this might be the first soup-based product collaboration from the Andy Warhol Foundation. And the foundation is getting into another area for the first time this fall: makeup. As with the soup, I’m not sure how that didn’t happen sooner.

A few of the Nars Andy Warhol makeup products (image via 8makeup.com)

The makeup collaboration is with Nars cosmetics, which will launch an Andy Warhol collection in October. The collection includes gift sets of nail polishes, eyeshadows and lip glosses drawn from the colors in Warhol paintings and eyeshadow palettes modeled after his Flowers series and self-portraits. Many of the gift sets are named after Warhol’s female muses, including Debbie Harry, Candy Darling and Edie Sedgewick.

“What I loved about [Warhol's] world was that he took elements from the past and made them his own,” the makeup brand’s eponymous founder, François Nars, told T Magazine. “That’s what we have done with this collection — taken Andy’s ‘world’ and made it modern.” This is a little cryptic, since Warhol himself was already a pretty modern guy. Maybe “modern” means “sellable in the form of makeup”? I don’t know.

Some artist products are unsettling or just plain odd — as in the case of the Keith Haring sex toys— but given Warhol’s marked interest in both of them, Campbell’s soup and makeup seem harmless, even appropriate. Still, it would be entertaining to see someone try and market one of the artist’s less user-friendly color combinations.