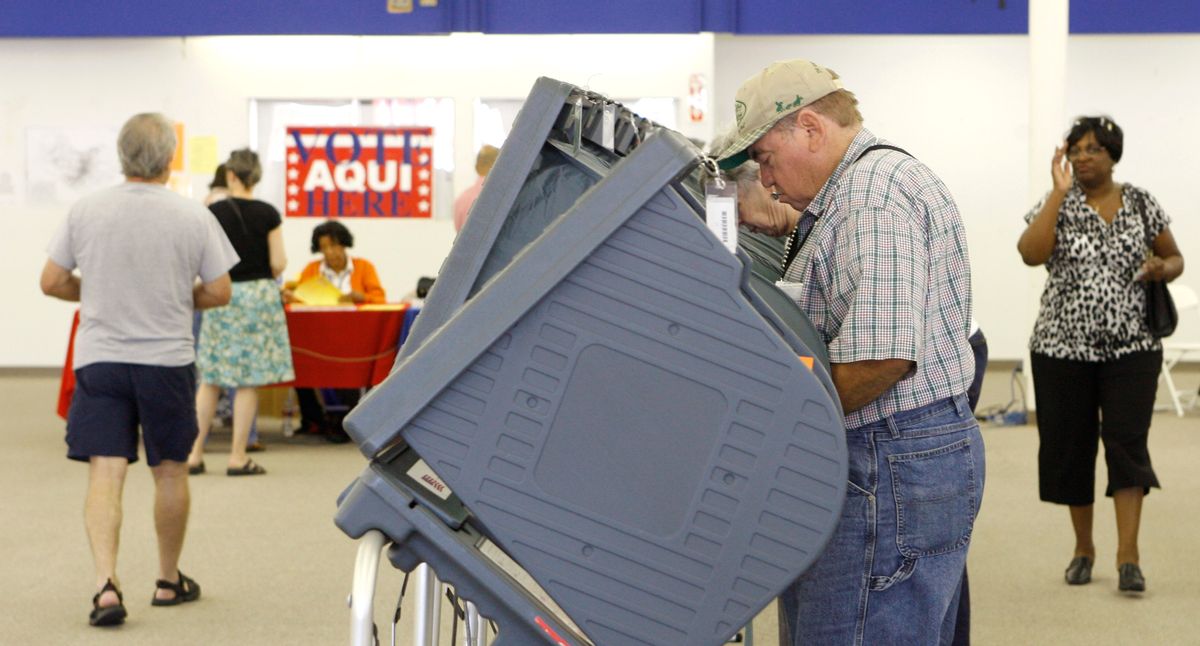 How does Texas discriminate against minority voters? Federal judges counted the ways.

Last Tuesday, a panel of federal court judges ruled that new district maps drawn by Texas' Republican-controlled legislature weakened the influence of Latino voters and in some cases evinced "discriminatory intent" against both Latinos and African Americans. Two days later, another panel of federal judges unanimously struck down a voter-ID law passed by the legislature in March 2011, arguing that it would disproportionately harm African-American and Latino voters. The judges did not address whether there was discriminatory purpose behind the legislation, but they noted that the legislature failed to pass amendments that would have mitigated the law's discriminatory impact.

Minority groups have outnumbered whites in Texas since roughly 2004, and 55.2 percent of the state's residents are now minorities, according to Census figures. As of 2011, the state's legislature was more than two-thirds white.

Texas Attorney General Greg Abbott's office declined to comment on the specifics of the rulings, but Abbott has promised to appeal both cases to the U.S. Supreme Court. In news releases, he said that the Supreme Court had already upheld voter-ID laws, and that the redistricting decision "extends the Voting Rights Act beyond the limitsintended by Congress and beyond the boundaries imposed by the Constitution."

Both decisions hinged on Section 5 of the Voting Rights Act, which requires certain states with a history of racial discrimination in voting — including Texas — to prove that any changes in their voting laws or procedures do not hamper the voting rights of minorities. Enacted in 1965, the Voting Rights Act aimed to eliminate discriminatory voting practices that had long been used to suppress the black vote, particularly in southern states. Section 5 has been challenged, including in two cases pending before the U.S. Supreme Court, as an outdated provision that unfairly singles out certain states. The Court has not decided if it will hear the cases.

The rulings detailed several examples of discriminatory practices in Texas:

1. Lawmakers drew some districts that looked like Latino majority districts on paper — but removed Latinos who voted regularly and replaced them with Latinos who were unlikely to vote.

In the redistricting case, a panel of three federal judges found that Texas lawmakers had intentionally created districts that would weaken the influence of Latino voters, while appearing to satisfy the requirements of the Voting Rights Act.

In 2010, the 23rd district narrowly elected a Latino Republican, Francisco "Quico" Canseco. One email to a Republican mapdrawer, released during the legal battle over the maps, shows that Republicans were trying to increase the chances Canseco would be re-elected.

Lawmakers used a similar tactic in redrawing a state house district, modifying it "so that it would elect the Anglo-preferred candidate yet would look like a Hispanic ability district on paper," the court ruled. An "ability district" is one in which a minority group has the capability to elect representatives of its choosing. The judges concluded that the legislature had been trying to make this district appear as if it satisfied the requirements of the Voting Rights Act, while actually trying to benefit white voters.

Judge Thomas B. Griffith, writing the unanimous opinion of the three-judge panel of the U.S. District Court for the District of Columbia, called it "a deliberate, race-conscious method to manipulate not simply the Democratic vote but, more specifically, the Hispanic vote."

In the years leading up to the 2010 census, Texas' population increased by 4.3 million people, 65 percent of them Latino. As a result, Texas gained four seats in Congress.

In their decision, the federal judges in the redistricting case noted that minority voters have no constitutional right to proportional representation. But the Voting Rights Act says states can't weaken the electoral power of minorities. So, the judges reasoned, if there is already a gap between the minority population of a state and its political representation, states can't let that gap grow wider.

In Texas, the judges observed, African Americans and Latinos were already underrepresented in Congress. Given the number of voting-age minority citizens in the state, Texas's old maps should have had roughly 13 congressional seats that represent districts in which minorities have a strong voice, the judges calculated. Instead, Texas only had 10 such districts.

Instead of narrowing this "representation gap" as the minority population grew, the legislature increased it.

With four additional congressional seats, Texas should now have 14 districts in which minorities have the ability to elect their chosen representatives, the judges concluded. But the state's new plan still included just 10 minority districts.

In defending its new maps, Texas argued that the districts had been shaped to help Republicans and hurt Democrats — a perfectly legal tactic — and that race had been irrelevant to its choices.

The Associated Press reported that the state's lawyer had argued before the court that "'a decision based on partisanship' is not based on race, even if it results in minority voters having less political influence."

The judges noted that while there was no "direct evidence" that "discriminatory purpose" animated the new maps, circumstantial evidence indicated the design of the new congressional districts "was motivated, at least in part, by discriminatory intent."

Texas' gerrymandering was not limited to manipulating the kinds of voters within districts. By reshaping a district, mapdrawers can determine whether key businesses, schools and tourist attractions are removed from a district or added to another.

The redistricting opinion dwelled at length on "unchallenged evidence that the legislature removed the economic guts from Black ability districts." African-American Rep. Al Green testified that the "economic engines" of his district — including a medical center, a university, and the Reliant Park sports mega-complex that includes the Astrodome — were removed. African-American Rep. Eddie Bernice Johnson's district lost a sports center and an arts district, while Latino Rep. Charles A. Gonzalez from San Antonio said that both a convention center and the Alamo were drawn out of his district.

"No such surgery was performed on the districts of Anglo incumbents," the judges found. "In fact, every Anglo member of Congress retained his or her district office."

"The only explanation Texas offers for this pattern is 'coincidence.' But if this was coincidence, it was a striking one indeed," Judge Griffith wrote. He noted that Texas had argued that "without hearing from the members, the mapdrawers did not know where the district officers were located." But, he wrote, "We find this hard to believe as well. We are confident that the mapdrawers can not only draw maps but read them."

The judges noted that members of Congress who represented minority districts testified that they were largely shut out of the map-drawing process. At the same time, white Republican members asked for tweaks to their districts and were often accommodated. "Anglo district boundaries were redrawn to include particular country clubs and, in one case, the school belonging to the incumbent's grandchildren," the judges wrote, referring to requests related to the districts of Republican Congressman Lamar Smith, and Kenny Marchant, respectively.

Not all white lawmakers were happy with their new districts. Democratic Congressman Lloyd Doggett, who was forced to run in a new district as a result of the Republicans' maps, told the Texas Tribune last year that map plans "plunged a dagger into the heartof our community."

4. Divide and conquer: Texas "cracked" minority voters out of one district into three.

One common tactic of racial gerrymandering is "cracking" a minority community into different districts so it cannot elect a minority politician.

Looking at a State Senate district in Fort Worth, the judges cited testimony that lawmakers reshaped the district in a way that "cracked the politically cohesive and geographically concentrated Latino and African American communities," and placed those voters "in districts in which they have no opportunity to elect their candidates of choice."

The judges cited "well supported" testimony that African Americans in Fort Worth had been "exported" into a rural, "Anglo-controlled" district to the South, while Latinos on the North side of the city had been put into another white, suburban district, leaving the "reconfigured" Senate District 10 a "majority Anglo" district.

The judges rejected Texas' argument that "its decision to 'crack' [Senate District] 10 is best explained by partisan, not racial, goals," and concluded that the district map "was enacted with discriminatory purpose."

5. Texas passed a voter-ID law with requirements that would make it disproportionately difficult for African-Americans and Latinos to vote.

A three-judge panel found last Thursday that Texas' voter-ID law discriminates against minorities, since the costs of obtaining the required identification would place a greater burden on low-income Texans, who are more likely to be minorities than white.

Although the state issues free election IDs, the cost of a birth certificate, one of the underlying documents needed for the ID, is $22 — and that's if voters can get to the right government office in the first place. At least one-third of Texas' counties don't have a state Department of Public Safety office, which issues state IDs.

"It is virtually certain that these burdens will disproportionately affect racial minorities," wrote Judge David S. Tatel for the unanimous panel of the U.S. District Court for the District of Columbia. He cited "undisputed U.S. Census data" showing that Hispanics and African Americans in Texas are more likely to be poor and more likely to live in households without a car.

"Simply put, many Hispanics and Africans Americans who voted in the last election will, because of the burdens imposed by [the new voter ID law], likely be unable to vote in the next election," he wrote.

The judges agreed ahead of last month's trial to keep out any evidence indicating motivations for the voter-ID law, so they didn't address whether or not there was intentional discrimination behind the creation of the law. But the 56-page decision pointed out that the Texas legislature could have made its law more accommodating by, among other things, waiving documentation fees for the election IDs, reimbursing travel-related costs or expanding DPS office hours to evenings and weekends — amendments that were either defeated or tabled.

Finally, the judges agreed with Texas that the state had an interest in preventing voter fraud, even though there is little documented evidence of current voter fraud in Texas. However, they noted that circumstantial evidence "could nonetheless suggest that Texas invoked the specter of voter fraud as pretext for racial discrimination."

Whatever the Supreme Court's response to Texas' voter-ID law, Texans will not be required to present a photo ID to vote this November.

"As a result of the court's decision, Texas is not permitted to implement the photo ID law," Texas Secretary of State Hope Andrade announced in a news release last week.

As for the redistricting maps, Texas will use a set of interim maps drawn by federal judges in Texas. Those interim maps were part of a contentious battle that earlier went to the U.S. Supreme Court.