Misinterpreting a joke -- for traffic and profit. BuzzFeed should know better 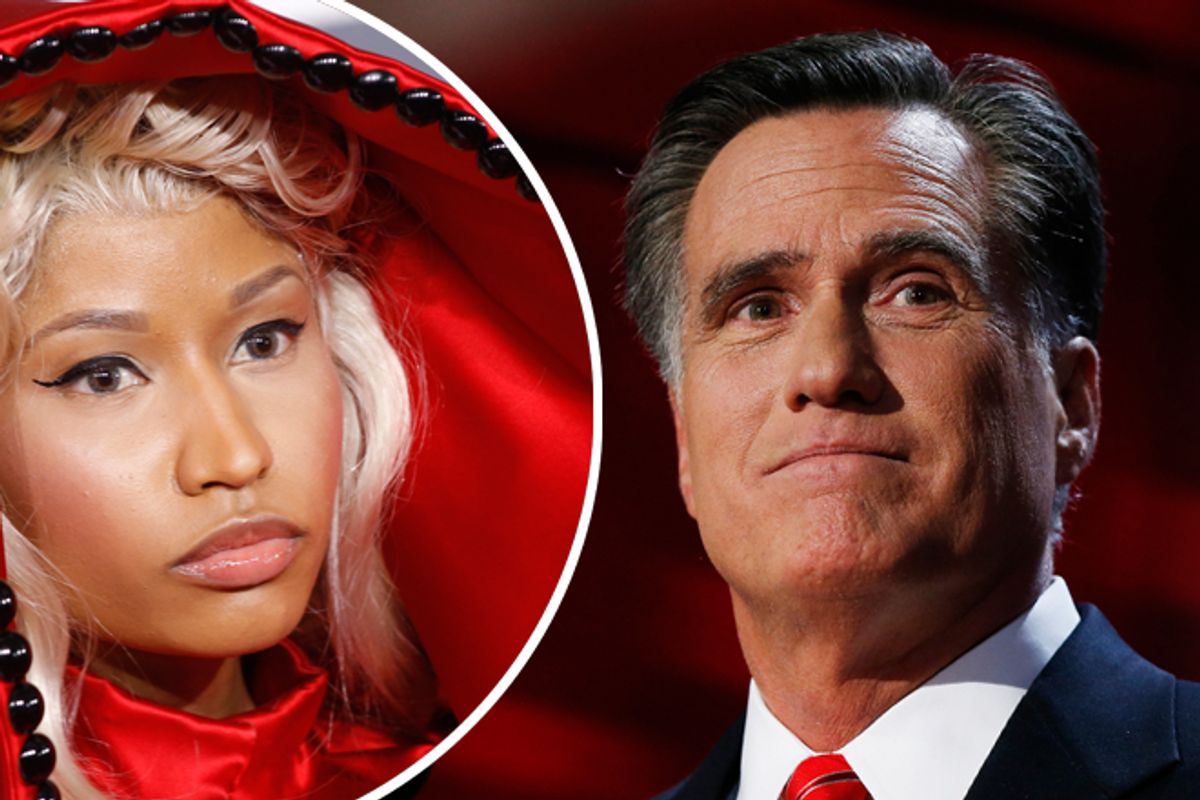 Dear News Consumers: Sometimes on Twitter or Facebook or whatever you come across a piece of surprising information that you wish to share with your friends. One step you should always take, first, is checking the source. The more surprising the headline, the more important it is that you make sure it didn't come from the Onion or "funnyjokenewz.biz" or "The Blaze" before you start spreading it around.

Now, apparently, we should add BuzzFeed to the list of suspect sources. The only explanations for this story are either a willful attempt to mislead in order to garner traffic or an unforgivably stupid misinterpretation that for some reason has not yet been updated or clarified. The post (you've probably seen it referenced elsewhere already) claims that rapper and pop star Nicki Minaj "is voting for Mitt Romney" and the proof is that she said so in one line, a line about how "lazy bitches are fucking up the economy," on a Lil Wayne mixtape. "I am not joking," says BuzzFeed editor Matt Stopera. But guess what, Nicki Minaj is.

I guess I'll let Andy Hutchins take care of the "sometimes rappers use personas, exaggeration, metaphor and humor" portion of the "fact-check" here:

The Romney bar is between "And all these bitches is my sons, yeah, c-section," which is one of many literally impossible and figuratively creative "All you bitches is my sons" shots she's taken in the last few years, and another one of many Nicki shots at "you lazy bitches," which has come to be her shorthand for haters. To begin the verse, she gender-flips Big Sean's clunking "Drop it to the floor, make that ass shake" to "Drop it to the floor, make that dick shake" and suggests "my homegirl slurp it like a milkshake"; two bars after the Romney "endorsement," she's "out in Miami," "chillin' wit' a zombie."
Those bars are likely not literally true, but that they are figuratively possible is the point.

So it's certainly possible that Ms. Minaj will cast her vote for Romney/Ryan in the fall, but a joke on a mixtape is not actually evidence of sincere support, as anyone with any passing familiarity with hip-hop should immediately understand. (Look, Matt Yglesias used it as jumping-off point for an actual policy argument! That guy!)

Anyway, dear BuzzFeed, don't be stupid and don't treat your readers like they're stupid. Please. There are enough people lying to everyone all day without you having to also do it.