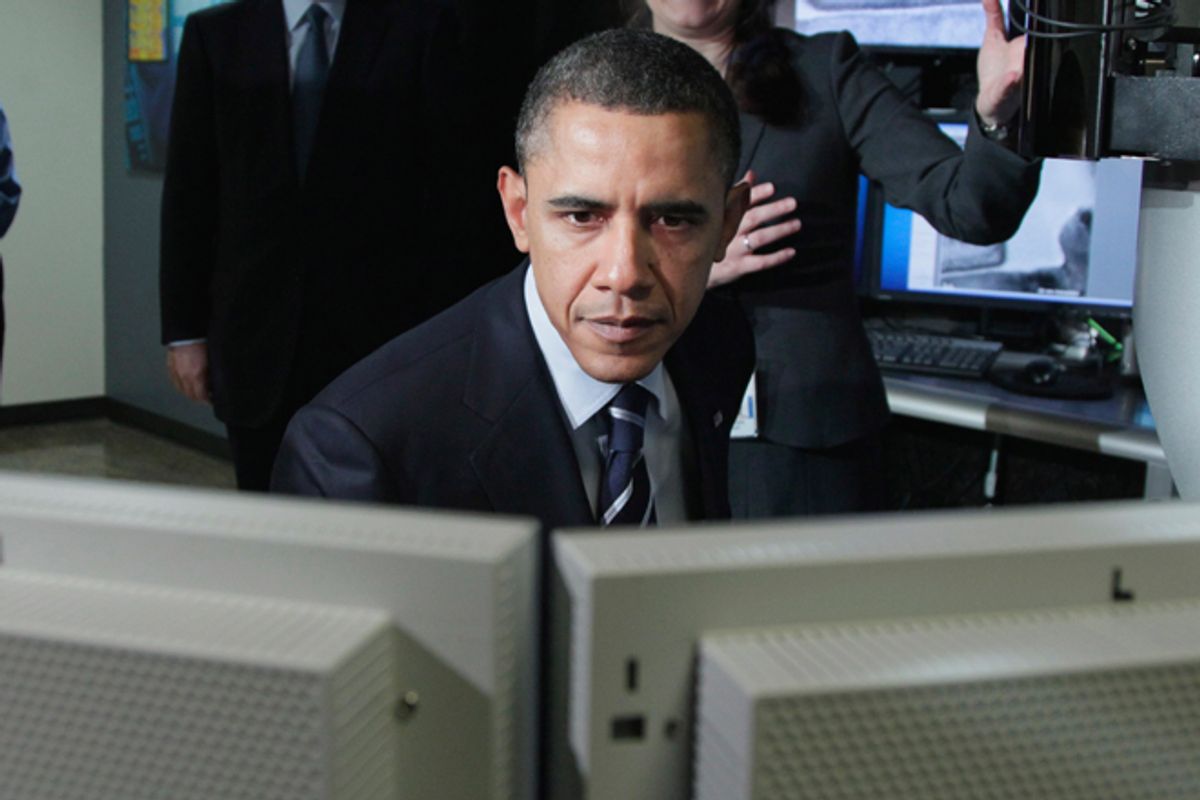 The most unusual thing about the Reddit "Ask Me Anything" session President Obama conducted last Wednesday was how utterly usual it was. He visited the site for about a half-hour, took a few questions on subjects ranging from Internet freedom to small businesses to basketball, and then departed, leaving the community he addressed excited and a little honored that he'd chosen to visit. In other words, it's just like thousands of other campaign stops he's done already, from a half-hour speech he gave at B.R. Miller Middle School in Marshalltown, Iowa, to a quick stop at a Puerto Rican cafe in Orlando where he posed for pictures to an appearance at a Council Bluffs high school where he answered questions from teachers about No Child Left Behind.

This is how campaigning works: The candidate shows up at a place where people with similar interests already converge, stays for a small amount of time, answers some questions about the kind of things people with those interests care about, and leaves. Bringing that kind of star power tends to make the actual people you visited feel more warmly toward the candidate, while news reports about the appearance communicate to people who weren't able to attend that the candidate cares about your particular group. The event even created traffic jams, making it hard for people who weren't already on the site to reach Reddit due to its overloaded servers -- a familiar situation for anyone who's tried to get across town when the president's visiting, or tickets to a political event that quickly sold out. Some of the questions were ridiculous, to be sure, but they're not that much different from the mildly unhinged questioners who sometimes get the mic at meatspace Q&As.

The Web's excitement about the event was understandable -- that was the reason Obama agreed to come to Reddit in the first place, after all -- and certainly it deserves its place in the history of the Internet (or it would, if anyone ever kept track of the history of the Internet). In many ways, it fulfills one of the great promises of the Web: making geographic boundaries far less consequential. The ability people in far-flung places now have to access political information is nothing to sneeze at, and if we can find more ways for them to interact directly with elected officials, as happened here for the nine people whose questions were answered by the president, that would obviously be a boon.

But the event didn't really feel like it lived up to the revolutionary potential for politics on the Web. It just felt like another campaign stop. Instead of rising up from the site's user base, it was a high-level event, coordinated behind the scenes with Reddit co-founder Alexis Ohanian, a long way away from the radical transparency we'd hoped the Internet would bring to politics. Though the Internet is supposedly a meritocracy, some of the most highly up-voted questions on the thread (meaning that a large number of other users expressed a desire that they be answered) were ignored, and most stories about the AMA included only the direct questions and answers, even though all that other churn and deliberation is what makes the Web different from our usually deliberation-free daily lives. Some who aren't fans of Obama have complained about the AMA's softball questions, and libertarian Redditors alleged one question was planted. Even the geographic barriers proved stubborn: when Reddit's servers couldn't take the load, effectively shutting out a large number of people from participating in the event, we are reminded that the internet, despite its seeming virtuality, is still governed by the physical capacity of microprocessors and cables and wires. It's hard to be a political activist and still make enough money to live, and it's hard to participate in online political events unless you happen to be logged into Reddit at 4:30 Eastern, the end or middle of the workday for most Americans.

As Bethlehem Shoals recalled in a recent piece for the Awl about the Internet's shift from alternate reality to reality extension, when presidential candidate Mark Warner held a Q&A in SecondLife in 2004, "Participation was enthusiastic but somebody in the audience with wings simply would not stay put." Obama's AMA, notable as it was, seems like basically that but without the wings. But the wings are, for better or for worse, what makes the Web different. What the Obama team really succeeded in doing on Reddit last week was taking a supposedly revolutionary cultural form and making it operate in exactly the same way political events have operated for a good half-century -- and they did this while at the same time convincing almost everyone that they'd done something radical and new. They are certainly to be applauded for that. But the rest of us might not have clapped quite so loudly for ourselves.