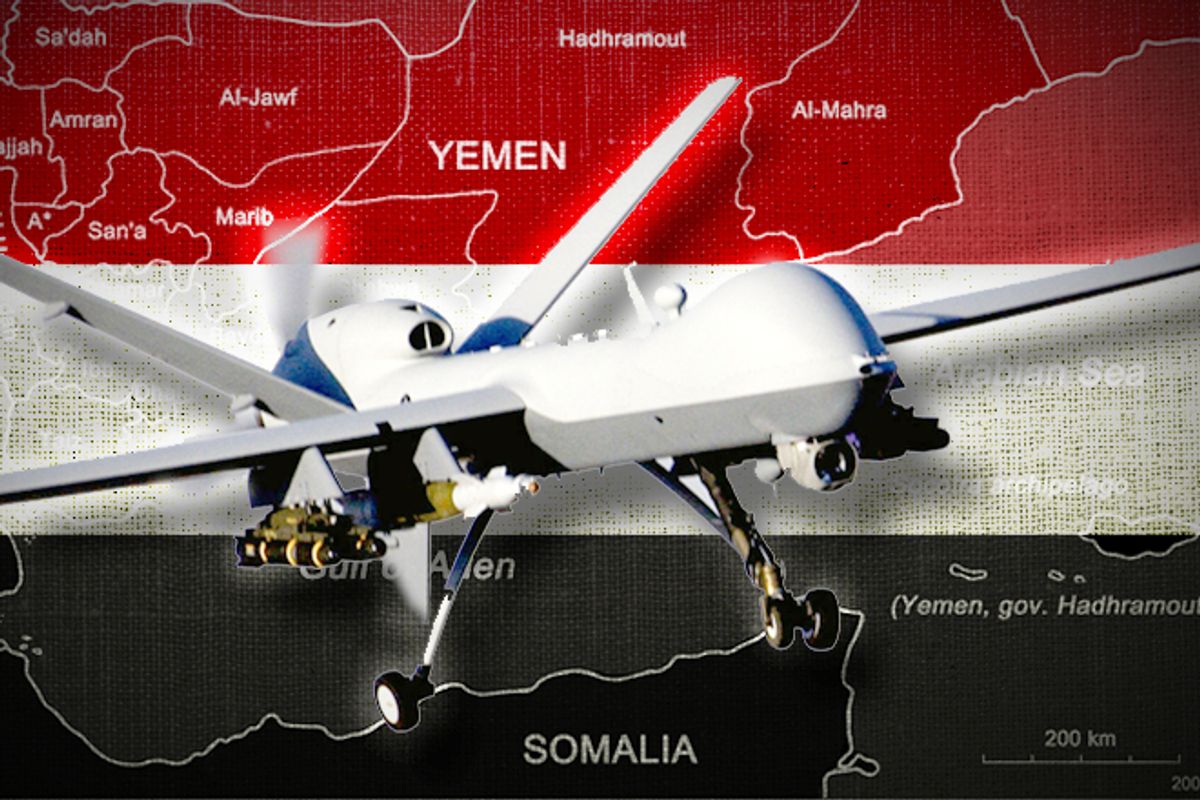 A U.S. drone killed six people in Yemen earlier today. As Reuters pointed out, “this is the fourth strike in two weeks” in a single province in the country. "Our approach has been to develop operations in each of these areas that will contain al Qaida and go after them so they have no place to escape," Defense Secretary Leon Panetta told a Senate committee in June.

A new analysis questions that assumption. Published in the Middle East Policy Journal, the article looks at Yemen and concludes that increased drone strikes “will produce distinct forms of blowback,” the CIA-coined term describing the unintended actions that harm America resulting from U.S. policies. Overall, “this will manifest itself in terms of increased recruitment for al-Qaeda or affiliated groups and a reduction of the Yemeni leadership’s ability to govern, increasing competition from alternative groups.”

Written by three scholars at the University of Arizona, “Drone Warfare in Yemen” finds five distinct forms of blowback:

The authors make the compelling points that drone programs rely on the support of the local regime. Whatever benefits this has over the short-term, over the long-term it makes those regimes lose legitimacy in the eyes of their own people. Such a development can be deadly -- al-Qaida first declared war on the United States in no small part because it saw Saudi Arabia and Egypt as puppets of the Americans.

It is no coincidence that the increased frequency of drone attacks after 2009 coincided with the domestic unrest in Yemen, the authors say. On June 3, 2011, the leader of Yemen, Ali Abadallah Saleh, who cooperated with the United States even as he tolerated al-Qaida elements, was injured in attacks on his compound, compelling him to go to Saudi Arabia and New York City for medical treatment. A new government may come to power that is less hospitable to American interests, as was the case in Egypt. The United States should welcome a government beholden to its people — but the result may not always be so benign, as was the case with Iran in 1979.

In addition, heavy reliance on drones may have the perverse effect of creating safe havens for terrorists or their supporters. Robert Grenier, head of the CIA's counterterrorism center from 2004 to 2006 and former CIA station chief in Pakistan, explained in June how this happens:

That brings you to a place where young men, who are typically armed, are in the same area and may hold these militants in a certain form of high regard. If you strike them indiscriminately you are running the risk of creating a terrific amount of popular anger. They have tribes and clans and large families. Now all of a sudden you have a big problem … I am very concerned about the creation of a larger terrorist safe haven in Yemen.

In destroying the state from above, terrorists can fill in the void on the ground. That’s just what happened with Ansar al-Sharia, a Taliban-like group in Yemen, which has seized parts of that country and was only recently formed. “The extensive use of [drones] for executive executions and signature strikes with Yemeni government partners is a dangerous precedent that lends itself to the creation of local-emirate enclaves,” write the journal article’s authors.

Drone strikes may be necessary if the most dangerous al-Qaida leaders such as Ayman al-Zawahiri are in sight and cannot be captured. As a previous article by one of the professors puts it, “if extrajudicial dispatching of high-value targets is a goal, such targets are best deal with as Osama bin Laden was—through face-to-face assaults by crack JSOC troops based on reliable intelligence.” The promiscuous use of drones is not only unnecessary and brutal, it is dangerous to America. And it hampers the political reform that has showed so much promise in the Middle East.