Did Warren beat the Cowboys?

Her speech was a big hit in Charlotte, but she may have been a victim of something totally beyond her control 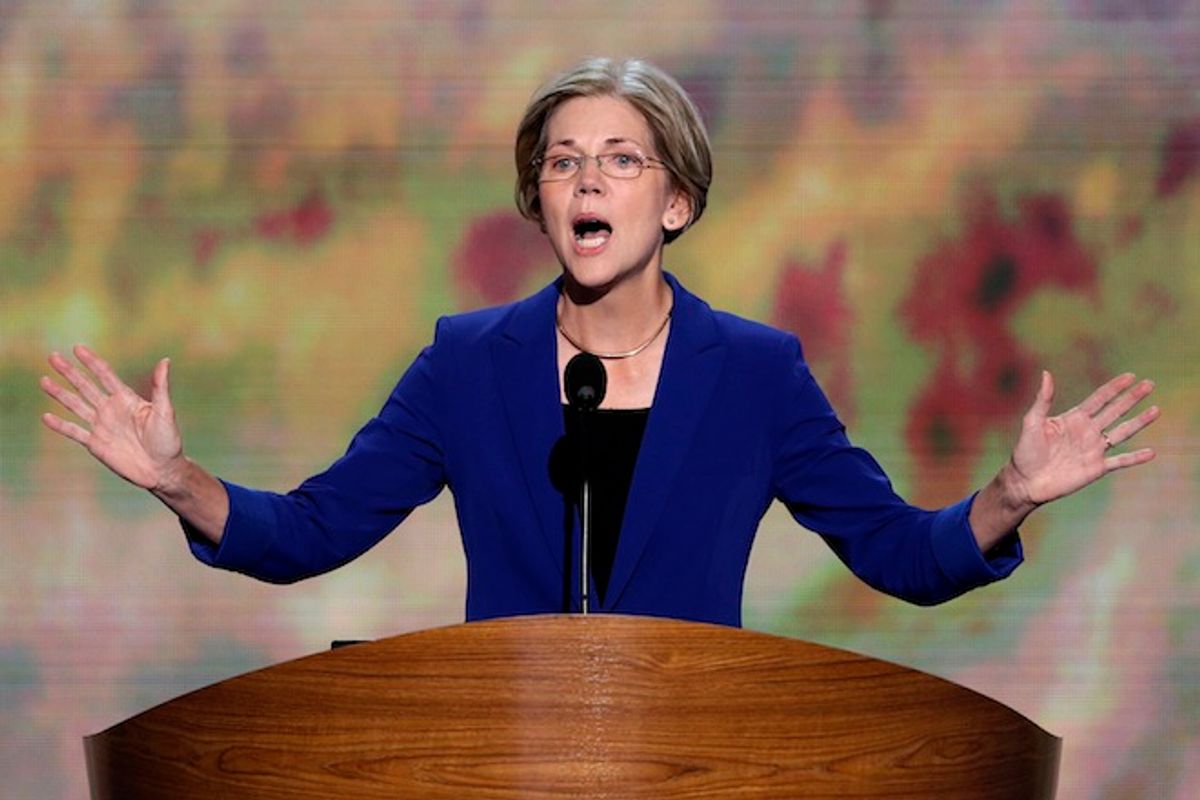 There was a big problem with Elizabeth Warren’s prime-time convention address, and it had nothing to do with its content, her delivery or the audience’s reaction. It was counter-programming that undermined her – the Giants-Cowboys NFL season opener that was in the third quarter and a Red Sox-Mariners game that was about to start as Warren took the stage in Charlotte.

Warren’s opponent, Scott Brown, has forged a powerful cultural connection with blue-collar and middle -class voters in Massachusetts that is to a striking degree rooted in sports. He talks frequently of his affinity for the state’s four professional teams, has campaigned with famous athletes, and aired ads in which he sings the praises of the Celtics, Red Sox and Fenway Park.  He’s also made regular appearances on a Boston sports radio station.

Brown’s guy’s guy appeal had a lot to do with his surprise victory in the 2010 special election to fill Ted Kennedy’s seat. Running against Martha Coakley, who famously slurred Curt Schilling as “another Yankee fan” in a fateful radio interview days before the vote, Brown performed impressively in working-class cities that typically vote Democratic, like Fitchburg, Lowell and Quincy. Since then, he’s tended to his relationship with these voters, and it’s helped make him the most personally popular politician in Massachusetts. If the election were about likability and nothing else, he’d be unbeatable.

But Massachusetts is still a deeply blue state, one that last sent a Republican to the Senate in 1972 and to the House in 1994, so Warren has a fighting chance. Her challenge is to win back a critical chunk of the blue-collar and middle-class voters who abandoned their traditional Democratic home for Brown two years ago. That means making a compelling argument that taps into their economic anxiety and convinces them that, no matter how much they personally like and identify with Brown, a vote for him will empower a national Republican Party that they feel no kinship with and that will act in a way that’s harmful to their interests.  It also means selling them on her party’s own economic philosophy.

The original promise of Warren’s candidacy was that she’d be up to the task. Her forceful, digestible and apparently impromptu explanation of the social contract last September became a viral video hit that certified his status as a national liberal hero (and helped fill her campaign coffers). It also raised hopes that she’d be able to break through the noise and win back the voters her party lost to Brown.

For a while, it seemed to be working. The biggest names in Massachusetts Democratic politics had refused to challenge Brown, seeing him as invincible, but Warren found herself tied with the incumbent last fall and held that position until very recently. But the most recent data has been discouraging for Democrats, with Brown opening up a small but real advantage. A few weeks ago, Alex MacGillis documented the concerns that Democrats are expressing about Warren’s candidacy, and it now seems clear she’s lost ground in the last few months. (When MacGillis’ piece came out, I reacted skeptically, but the polling that’s since been released has convinced me he was onto something.)

Warren’s speech Wednesday night was a high-profile chance for her to hit the reset button, a slot in the national television hour of the convention. And in many ways, she rose to the occasion, describing how the middle class had been “chipped, squeezed and hammered” by a rigged system and offering the most direct attack on Wall Street yet heard at the convention. Fairness was a major theme; she talked several times of creating a level playing field. Her delivery was strong.

The question is whether the voters she most needs to reach were actually watching, or if they preferred the football and baseball games on other channels. Warren did a fine job preaching to the converted, but firing up the base is not her challenge.

We’ll see if the speech (and the news coverage it generates) boosts her in Massachusetts. If it doesn’t, her next best chance to shake up the race will probably be her debates with Brown. The forum is promising for Warren, conducive to the sort of unrehearsed riffing that produced her viral moment last year. She may need to come up with another one if she’s going to unseat Brown.