I was impaled by a fence

As a broke freelancer, I wounded myself in the place every man fears. But I had an unlikely savior: Obamacare 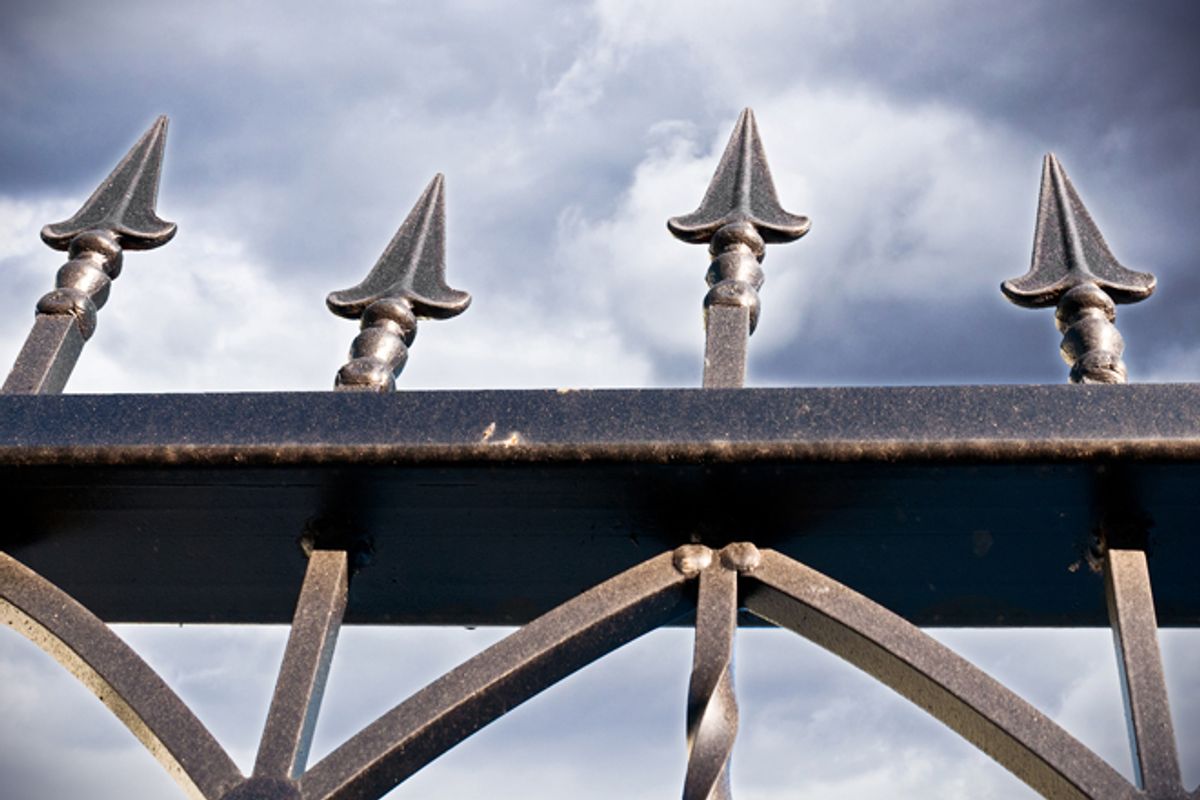 It was turning out to be a bad year.

Over the course of a few months, I had lost an apartment, my Mac died, and my car had reached a point in its life where the mechanic wondered if it was really worth that thousand dollars to replace the master cylinder. As for work, I am a music journalist, a career that puts me at the nexus of the recording and publishing industries; in other words, at the center of the Internet’s “creative destruction,” working twice as much for half the pay.

In short, it was turning into the kind of year where impaling myself on a fence could be considered a highlight.

It also explains why I was so quick to accept an offer by one of my editors to house- and dog-sit while he and his wife were in Hawaii. I’d turned into a professional vagabond, a stayer in guest rooms, someone living on the floors and couches of human kindness. It allowed me to keep telling myself that, while my life was nowhere near middle-class, it could be middle-class adjacent. Especially when I’m asked by friends with nice houses, great record collections and generous wine cabinets.

My first two days there were uneventful. On the third, a Sunday, I decided to read the papers, drink my coffee and listen to music outside. There were no speakers in the back yard, so I checked out the front patio, leaving the door half open. My charge -- a sweet rescue mutt with (I would soon discover) a hair-trigger temper, who trailed my every move in the apparent belief that since I’d given him food once, it could happen again -- followed me outside. Winston was not the most graceful of dogs. He was older, a bit goofy, with a wide turning radius. And he must have nudged the door closed.

If anyone has ever been locked out of their house, they know the wave of nausea that hit when I heard the lock click. There’s a certain finality to that sound, not too far, I imagine, from the closing of a crypt. You know, without even checking, that it’s locked. My keys and my phone were inside. There were glass doors on the patio, but the glass looked expensive, beveled and etched, and breaking them would simply replace one problem with another. But I had left the back door open. Just one problem: There was a fence with a locked gate standing between me and the door.

It had been many, many years since I had been called on to climb a fence, but this one didn’t seem so bad. Sure, there were theft-deterrent spikes on top of each pole, but they looked clearable. Besides, I wasn’t a thief.

I climbed to the top with no problem, and there was a narrow ledge to stand on. Then I went to swing my leg over the spikes ... and it ends up I’m not as limber as I once was. (As an old friend reminded me, I was never that limber to begin with.)

I heard the fabric of my jeans tear, and felt a pinch, but figured I had avoided the worst. After a few minutes of planning, and a few more tears and pinches, I finally clambered down off the fence. Success! My thighs felt a little damp, so I opened my pants. It looked like a David Cronenberg movie in there: Where my crotch should be was a small knot, the color of condensed milk, throbbing on a cord, floating in a shallow pool of blood.

At this point in the story, men turn green and women’s faces are contorted in sympathetic pain. But I come bearing good news: Getting spiked in the balls does not hurt as much as you’d think. Either that, or I was in shock. Whatever the case, I was able to waddle into the house, open the door to let the dog in (leaving it open for the ambulance), pick up the phone and call 911. This isn’t to say I felt no pain -- when the emergency dispatcher suggested I go to the kitchen and get some ice, I declined, preferring to simply lie down in the living room and wait for the professionals. It just wasn’t the kind of writhing, “please kill me now, lord” pain I expected.

Winston, once he was back in the house, seemed unimpressed by my situation. He sat down a few feet away and looked at me. All was calm. I heard the sirens, getting closer, and knew they were for me.

The mood was shattered, not by the EMTs, but Winston. He immediately turned on the rescue squad, baring his teeth, growling, barking, jumping, nipping at their legs. Getting him under control became the first priority. Someone picked up an umbrella and began jousting with Winston. This only got him madder. While all this is going on, I’m on the floor, literally balls out, pleading with them, “Don’t hurt the dog, he’s not my dog, he’s a good dog!”

Some 15 minutes later, in the ambulance, relaxing in a morphine haze, it hit me: I might go to sleep having a greater resemblance to Hitler than when I woke up. This became a major concern. I called up more than a few friends and let them know, singing the summer camp favorite: Hitler only had one ball, Goering had two, but very small ...

The EMTs couldn’t face the issue, either. Despite my repeated use of ”impaled,” they insisted on calling it in as an “abrasion.” For whatever reason, they did not take the protests of opiated patient -- and one who insisted on singing about Hitler -- seriously, so I remained on the books as an abrasion. I’m not too proud to admit that when the E.R. doctor finally took a look at me and asked if I knew I had been impaled, a sense of victory welled up inside me.

It was a busy day at the emergency room, but not so busy that news of my injuries didn’t make the rounds. I quickly became the Dirk Diggler of Cedars-Sinai. Everybody wanted to get a look at my extraordinary genitalia. Stabbings and shootings are everyday occurrences, but a good impaling -- especially one in the crotch -- hadn’t been in style since the 12th century. I didn’t mind. Sadly, this was the most attention my penis had experienced in quite some time.

Eventually I met my surgeon, Dr. K--. He was very matter-of-fact and businesslike about things. He ticked off the possible problems: infertility, impotence, possible loss of a testicle (aka, Hitler resemblance syndrome), urinary problems, other organ involvement. I liked that. I got the feeling this wasn’t the first scrotal impalement he had dealt with. Besides, if someone is going to wield a knife so close to your genitals, bedside manner is not an especially high priority.

When I woke up, a few hours and 15 stitches later, I discovered that I am the luckiest person ever to impale himself on a fence. It was just a flesh wound, albeit in a part of the body you never want to hear the words “flesh” and “wound” in such proximity. None of my plumbing was affected; all I had to worry about was healing.

Four days later, I was released. Back in the house, welcomed by the dog, I finally realized how close I had come to doing something really stupid, and wept. I realized something had to change. I could not go on living my life like a tourist. Sometimes you need a good kick in the balls (or in my case, a spike) to gain a moment of clarity.

Or maybe not. It’s now three months later. I have an apartment (a share, but a roof over my head), but I do not have a car or a job. I’m still scraping by as a freelancer. I’m not sure I’ve learned anything, other than that theft deterrent fences are a very good investment.

There is one thing I don’t have to worry about: medical bills, now $97,000 and counting. Because I have been scraping by as an uninsured freelancer, and a patient at the Saban Free Clinic in West Hollywood, a few months ago I was enrolled in Healthy Way LA, a county-run Obamacare pilot program. It has been a remarkably friction-free experience, easier and less adversarial than any I’ve had with commercial insurers. Since I gave the hospital my member number, the bills have stopped. There’s been no haggling over approvals, no arguing over deductibles, no requests for prescription drug co-pays. I could almost believe I was in Europe. After listening to all the hand-wringing in Tampa, I’m having trouble figuring out what part of my freedom I’ve given up in order to keep my genitals intact. Not that there was any doubt whom I would vote for this November, but this certainly made the stakes personal.

I saw the surgeon the other day and was given a clean bill of health, which means I can go back to not having sex again. There don’t seem to be any lasting effects, other than a scar and small knot of flesh, and that my urinary urgency goes from zero to 60 like a Ferrari.

But I still haven’t, shall we say, been taken on a test drive. Oh, there have been solo runs, so to speak, but as any test pilot can tell you, no matter how well you do on the video simulation, you never know how you’ll react until the rubber hits the road. I’m sure the next woman to visit will have some questions. I know I still have some.

Steven Mirkin is a freelance writer living in Los Angeles.