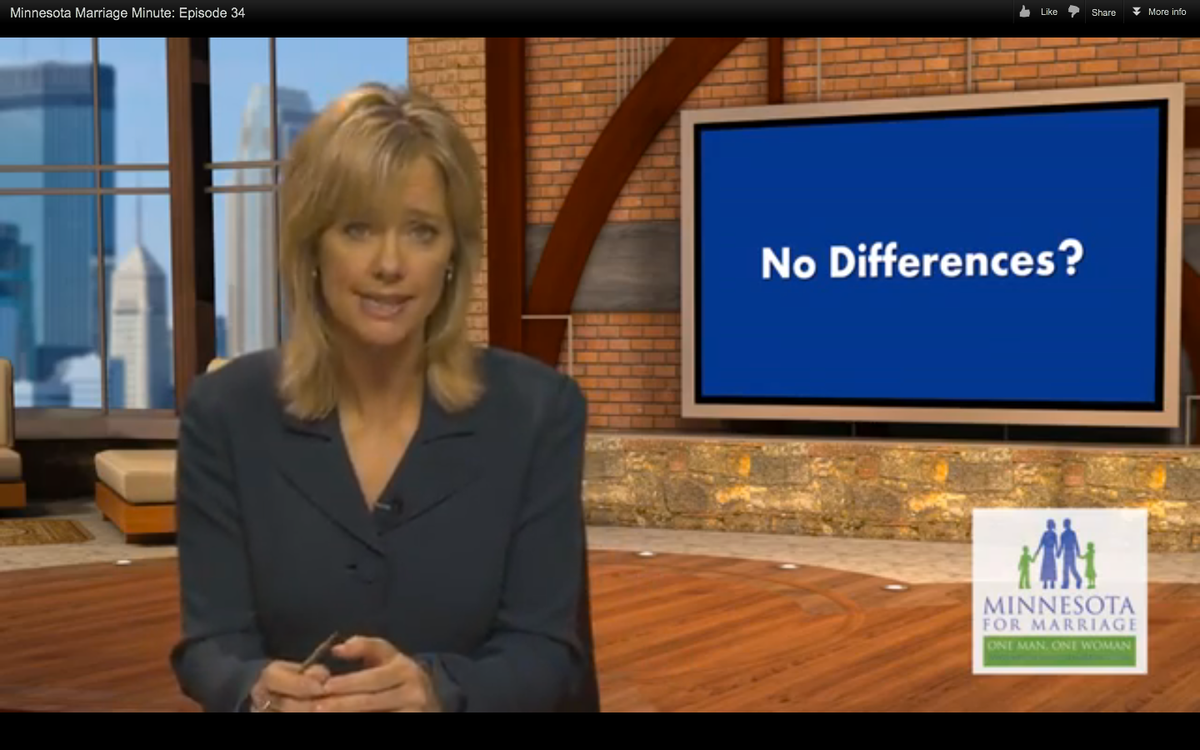 A controversial study on parenting has become a focal point of the campaign in Minnesota to pass a constitutional amendment banning gay marriage this November.

Conducted by University of Texas sociologist Mark Regnerus, the New Family Structures Study has been used by opponents of same-sex marriage to suggest that the children of same-sex couples fare poorly on a number of issues including relationships, abuse, and poverty.

But that’s not what the study actually says. Regnerus’ study compared children from families headed by married, heterosexual parents to children who were raised in families where one parent had a same-sex relationship at some point. The vast majority of the children whose parents had a same-sex relationship were either born out of wedlock or came from a “traditional family” that experienced a divorce. Critics say that comparison is unfair because it compares broken homes to married ones.

In fact, only two of the 2,988 people interviewed were raised by a same-sex couple for their entire childhoods. And only a small percentage of the children Regnerus coded as having gay parents said they had been raised in a same-sex household for more than a few years.

But groups opposed to same-sex marriage have been sidestepping those issues in order to make the point that same-sex couples do not make good parents, and by extension, should not be allowed to marry.

Minnesota for Marriage, a NOM-backed grouped campaigning for the marriage amendment, released a video on last week as part of its Minnesota Marriage Minute series. In it, host Kalley Yanta cites “important new research” by Regnerus.

She said the study, along with other recent research, disproves the claims made by marriage equality advocates that there are “no differences” in outcomes for children in families headed by same-sex couples versus families headed by two married parents of the opposite sex.

“It is troubling that gay marriage activists have been attempting to redefine marriage using the now discredited claim that there are no differences for children raised by same-sex parents,” said Yanta. “The evidence shows that there are many major highly negative differences.”

In an interview soon after the study was published, Regnerus said of intact families headed by same-sex couples, “They’re just uncommon, and too small a group to detect statistically-significant differences, for sure. Future studies would ideally include more children from ‘planned’ gay or lesbian families, but their relative scarcity in the NFSS data suggests that their appearance in even much larger probability samples may remain infrequent for the foreseeable future.”

A day after Minnesota for Marriage released its video on the Regnerus’ research, the Archdiocese of St. Paul and Minneapolis touted the study its official puplication, The Catholic Spirit. The article was written by Jason Adkins, who serves as executive director of the Minnesota Catholic Conference, the official public policy arm of the Archdiocese. The conference is part of Minnesota for Marriage, along with NOM and the Minnesota Family Council.

“Most notably … the study found that young-adult children of parents who have had same-sex relationships are more likely to suffer from a range of emotional and social problems,” Adkins wrote. “The study thus makes doubtful the assertion of those seeking to redefine marriage that there are ‘no differences’ in outcomes between children raised by parents in same-sex relationships and those raised by a mom and dad.”

He added, “In fact, young adults raised by a parent in a same-sex relationship did not fare better on one single outcome measurement than those people raised by their intact, married parents.”

Adkins then tied the study to passage of the amendment: “The Marriage Protection Amendment defining marriage as a union between one man and one woman that will appear on the November ballot is meant primarily to reaffirm the right of children to know and, to the extent possible, be cared for by the two people whose sexual union made them — a right recognized by even the United Nations.”

When the study was released early June, opponents of gay marriage quickly used it as evidence that children of same-sex couples fare poorly.

The study was promoted by the National Organization for Marriage as well as groups affiliated with the Witherspoon Institute, and was used by groups in several states that will have same-sex marriage on the ballot.

Carlos Maza of Equality Matters reported that at a Ruth Institute conference in July, Allen praised aspects of Regnerus’ study but also told the audience:

“What’s not so good about it, well this is what he’s gotten beat up for. So he has a very wide definition of what it means to grow up in a same-sex household. ‘I grew up in an opposite-sex household, but my dad had an affair with another man when I was twelve,’ that counts as growing up in a same-sex household. A lot of people have said ‘no, that counts as him growing up in a dysfunctional household.’ And, you know, they’re probably right about that. So that’s the Achilles heel of this study, but he has been literally vilified in the blogosphere and all over the place. And of course, he admits this, he’s also unable to disentangle all of his effects.”

That the study was published at all has also been a point of controversy. Social Science Research, the scholarly journal where Regnerus’ study first appeared, conducted an audit of the peer review process and found it lacking. “Scholars who should have known better failed to recuse themselves from the review process,” read a draft of the audit obtained by the Chronicle of Higher Education. The auditor, Darren E. Sherkat, a professor of sociology at Southern Illinois University at Carbondale, called the presentation of the data “extremely misleading” and questioned whether the paper should have ever been published in the first place.

Sherkat’s findings will be released in the November edition of Social Science Research.