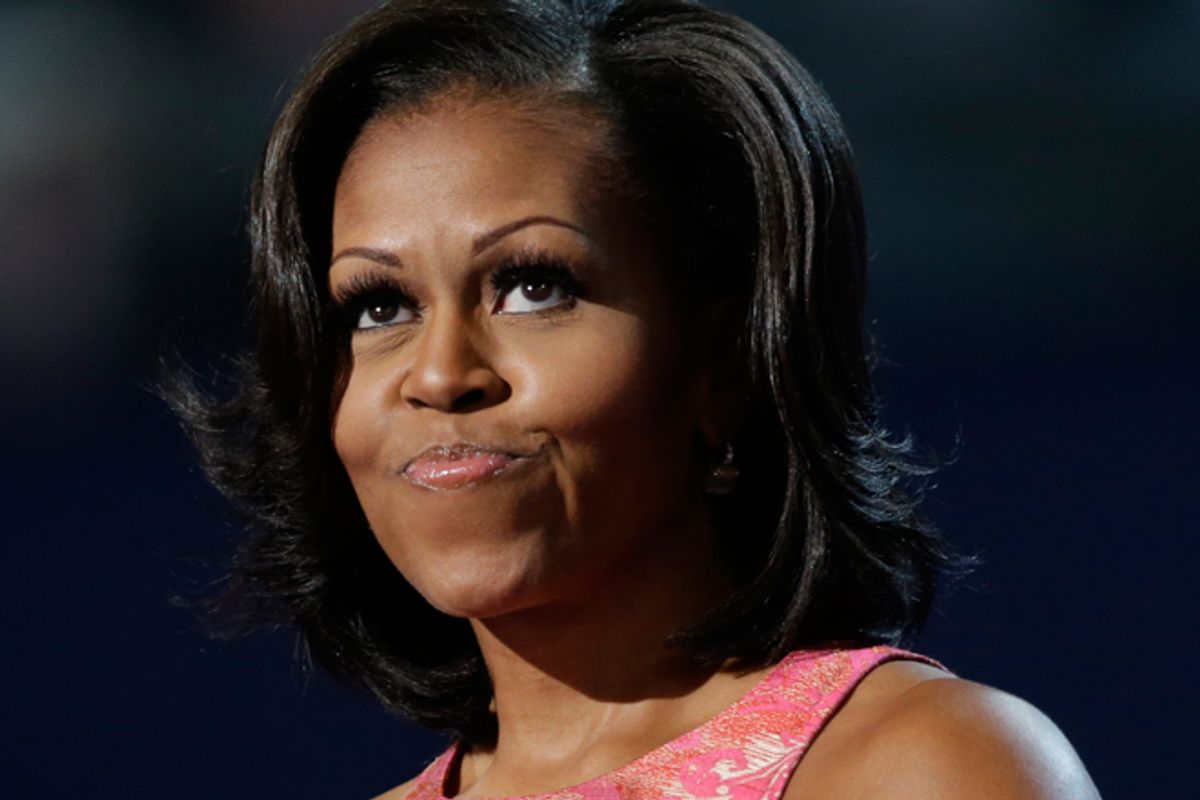 Michelle Obama didn't have to tell us "I love you, women!" Unlike Ann Romney, she could show us, with a speech that mixed policy and poetry and illustrated the difference between people who've heard about economic struggle – and people who've lived it.

She never mentioned Mitt Romney, but as she described her husband, a man with a rusted-out car, who wore shoes a half-size too small, whose single mother struggled to raise him and whose tenacious grandmother nonetheless hit a glass ceiling at her bank; who managed massive student loan debt until he got to the U.S. Senate and who comes home most nights to have dinner with his daughters; well, the contrast with Romney was stark. "Barack knows what it means when a family struggles," she said. Unlike someone else we won't mention.

It wasn't just Michelle Obama – in San Antonio Mayor Julian Castro, in Lilly Ledbetter, in Illinois congressional candidate Tammy Duckworth, known for her military service but who talked of relying on food stamps when she was young, we heard from people who knew hard times personally, who couldn't liquidate some stock options when times were tough, or go to their parents for money to start a business or attend college. And they proudly attributed their success not merely to their own talent and hard work, or their parents' – although that was there – but to a government that helped when they needed it. David Brooks unbelievably called the GOP "the party of strivers"; maybe he'll think differently now that he sees real strivers – who don't want to slam the door behind them after they've made it. There's no better symbol of the GOP than Paul Ryan saving his father's Social Security benefits so he could attend college – then crusading to privatize Social Security now that he's a wealthy man.

Lilly Ledbetter blew the delegates away with a genuinely folksy but hard-hitting speech about why pay equity matters to women – and got off one of the best lines, suggesting that a 23 cents an hour wage differential probably doesn't mean much to a man with a Swiss bank account. But I thought Julian Castro had the line of the night, one that made vivid the intergenerational tableau of struggle and aspiration and success. "The American dream is not a sprint, or even a marathon – it's a relay," he told delegates, a metaphor that shows us linked to one another, not mere competitors.

Four years ago in Denver, Michelle Obama was charming but nervous, a little tentative even, which (maybe only in hindsight) seemed to reflect her lingering ambivalence about the looming changes in her family's life. There was no hesitation or ambivalence Tuesday night; her words came from a deep place, like song. There are Democrats who believe Michelle Obama carries the torch for liberalism, and reminds her husband what he came to Washington to do, when his Beltway advisers may be telling him something different. Tuesday night she spoke to those Democrats, who may not be as enthusiastic or optimistic as they were in 2008. She told them she loves her husband even more than she did four years ago, because of all that he's done for the country – and maybe helped them to love him a little more, too.