What the Dems are saying in Wednesday's early speeches [UPDATED] 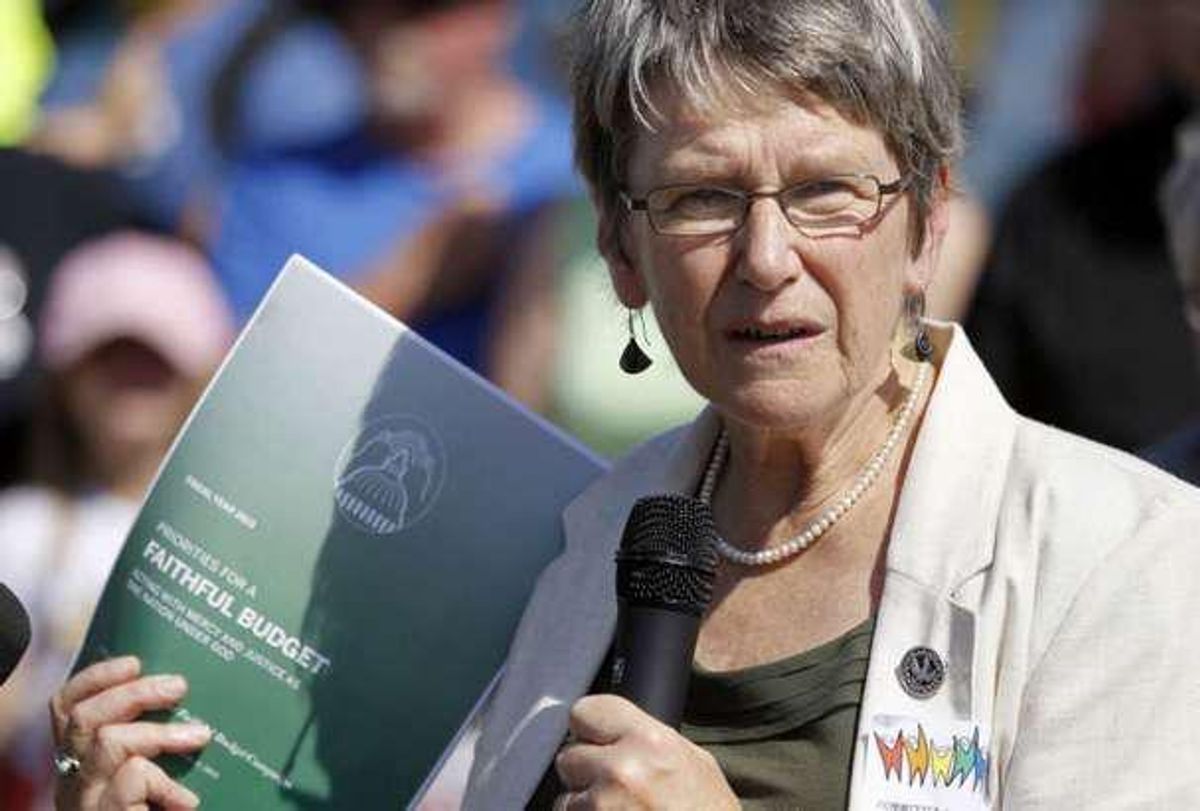 Here are some of the best quotes from Wednesday's speeches at the DNC:

"This year, we are determined to re-elect an extraordinary president who, in no ordinary time, led America back from the brink of depression—while Republicans tried to block him at every turn. This election offers the clearest choice of our time. Many names are on the ballot. So, too, is the character of our country."

"Last week, we heard folks at the other convention say they want to "take our country back." But here's what I noticed: they didn't say back to what. Well, we know what backwards looks like. We know what happened to middle-class families after two tax cuts for people who didn't need them; after deregulation of the banking and housing sectors; after the historic recession that followed."

"Rural Americans want leaders who help middle-class communities to plan and prosper over the long-term—not opportunists who reap the rewards for themselves, leaving nothing for the people who do the sowing. They deserve leaders who appreciate their contributions, who believe in their potential, and who care enough to invest in their communities."

"When women are in the halls of power, our national debate reflects the needs and dreams of American families. Women leading means that Congress is working to create jobs, make quality child care more affordable and strengthen the middle class because we understand that America grows the economy and opportunity from the middle out, not the top down."

"Republicans in the Senate blocked our efforts to go further and end pay discrimination once and for all. We, the women of the Senate, with President Obama by our side, will keep fighting—our shoulders square, our lipstick on—because you deserve equal pay for your hard work."

"The president knows that the path to the middle class goes right through America's classrooms. That was his path. That's America's path. However, his opponent believes differently."

"So why are we having to fight in 2012 against politicians who want to end access to birth control? It's like we woke up in a bad episode of Mad Men. Because when Mitt Romney says he'll "get rid of" Planned Parenthood, and turn the clock back on a century of progress, it has real consequences for the three million patients who depended on Planned Parenthood last year."

"First, Mitt Romney and Paul Ryan are correct when they say that each individual should be responsible. But their budget goes astray in not acknowledging that we are responsible not only for ourselves and our immediate families. Rather, our faith strongly affirms that we are all responsible for one another. I am my sister's keeper. I am my brother's keeper."

"But as someone who has been a businessman and a governor, let me level with you: just because Mitt Romney was a successful private equity executive, that does not mean he deserves to be president. Because when you move from business to government, what matters are the lessons you learn and what those lessons say about your priorities."

"We are here because we love our country, and we firmly believe in the American ideal that our country should work for everyone. That ideal is written into our laws, the rules of the road that create a level playing field in this country. Those are the rules I became attorney general to uphold. And those are the rules Mitt Romney would have us roll back."

"This election is about many things, but if you want to understand the values of the two candidates, all you have do is think about Benita, the lady who introduced me. Governor Romney calls young people like her 'illegal aliens.' President Obama calls them 'dreamers.' That is the difference in this election.

"President Obama understands and supports these basic human rights because these rights help all Americans. Strong unions and collective bargaining lifted millions out of poverty and built the great American middle class. And it's the middle class that keeps America's democracy and economy strong."

David Foster, a former employee at a company controlled by Romney’s Bain Capital

"I'll admit, I was glad Paul was picked. I hoped it would result in a serious debate about the choice before us. Then I heard his acceptance speech—it kept the fact-checkers up all night."

"Now, a third-grader can do the math. If you refuse to ask the wealthiest to pitch in, then you hit everyone else much harder. And that's exactly what the Romney-Ryan plan does. They call their plan bold, brave and courageous. I ask you: Is it bold to give millionaires another tax break while forcing seniors to pay more for Medicare? Is it brave to reward companies that ship jobs overseas while cutting education at home? Is it courageous to raise taxes on middle-class families while giving tax cuts to people with Swiss bank accounts?"