As the president prepares for his big speech, the newest economic data gives him reason to smile 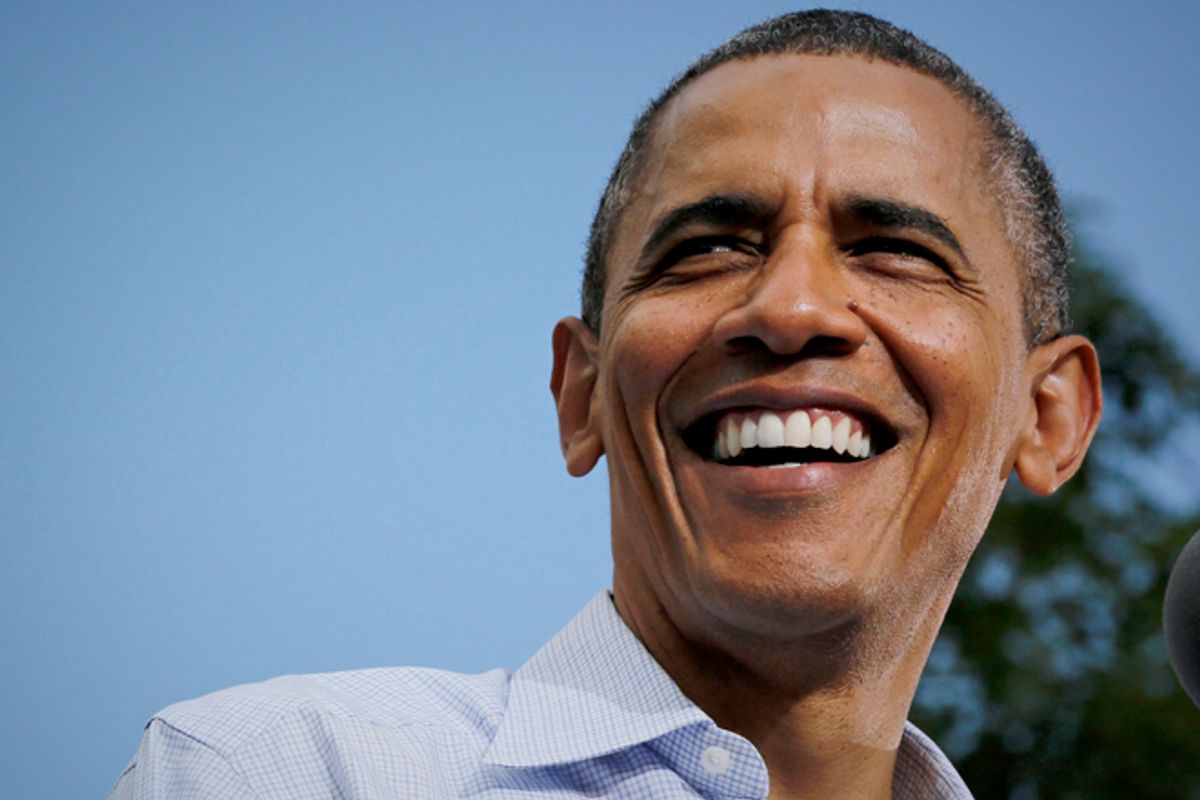 Talk about your excellent timing! As President Barack Obama prepares for his big speech closing out the Democratic National Convention tonight, U.S. stock market indexes are flirting with their highest peaks of his entire presidency.

Three hours after the market opened, the Dow Jones industrial average was up 230 points. Of course, it's always good to be cautious about short-term spikes -- a significant part of the investor euphoria is likely due to a huge new bond-buying program in Europe announced this morning by European Central Bank president Mario Draghi that the Wall Street Jounal billed as the "most aggressive plan to date to deal with Europe's nearly three-year-old debt crisis." We've seen this pattern before: Global financial markets rally after a new initiative is announced in Europe, only to falter before the day is even over, when the grim reality of Europe's continued slide into recession sets in again.

But there's other news fueling this particular market rally. The private payroll report from ADP that always comes out a day or two before the government's labor report exceeded the consensus estimate -- American employers added 201,000 jobs in August, according to ADP. The ADP report is not a terribly reliable predictor of the government jobs report, but a surprise to the upside is always better than the alternative. Jobless claims also dropped to their lowest point in a month, and another report indicated that the "massive" service industry sector is expanding again.

It would certainly be overstating the case to imagine that Thursday morning's economic indicators will do much, if anything, to change entrenched views on the economy that have taken years to solidify, but if I were President Obama this morning, I'd be feeling pretty good about things. After a Republican convention for which TV ratings dropped dramatically compared to 2008, the ratings for the opening day of the DNC exceeded both the Republican and Democratic conventions from four years ago. And after a stunning speech from the first lady on Tuesday and a blockbuster from Bill Clinton on Wednesday, Obama gets to take his place at the podium with a backdrop of economic data that, at the very least, suggests the bottom isn't about to drop out in the next two months.

And then there's that happy stock market. The ups and downs of Dow Jones don't necessarily correspond with the standard of living enjoyed by working Americans, but hey, that's not what some staunch conservatives think. The Big Picture's Barry Ritholtz reminds us this morning of a quote from Larry Kudlow, the CNBC talk show host and free-market-is-never-wrong apostle.

"I have long believed that stock markets are the best barometer of the health, wealth and security of a nation. And today’s stock market message is an unmistakable vote of confidence for the president."

Kudlow made that quote in 2007, not too long before the stock market began to fall, but I'm sure he still believes it. Right?