Gabby Giffords' made a moving appearance Thursday, but Democrats refused to bring up gun control in Charlotte 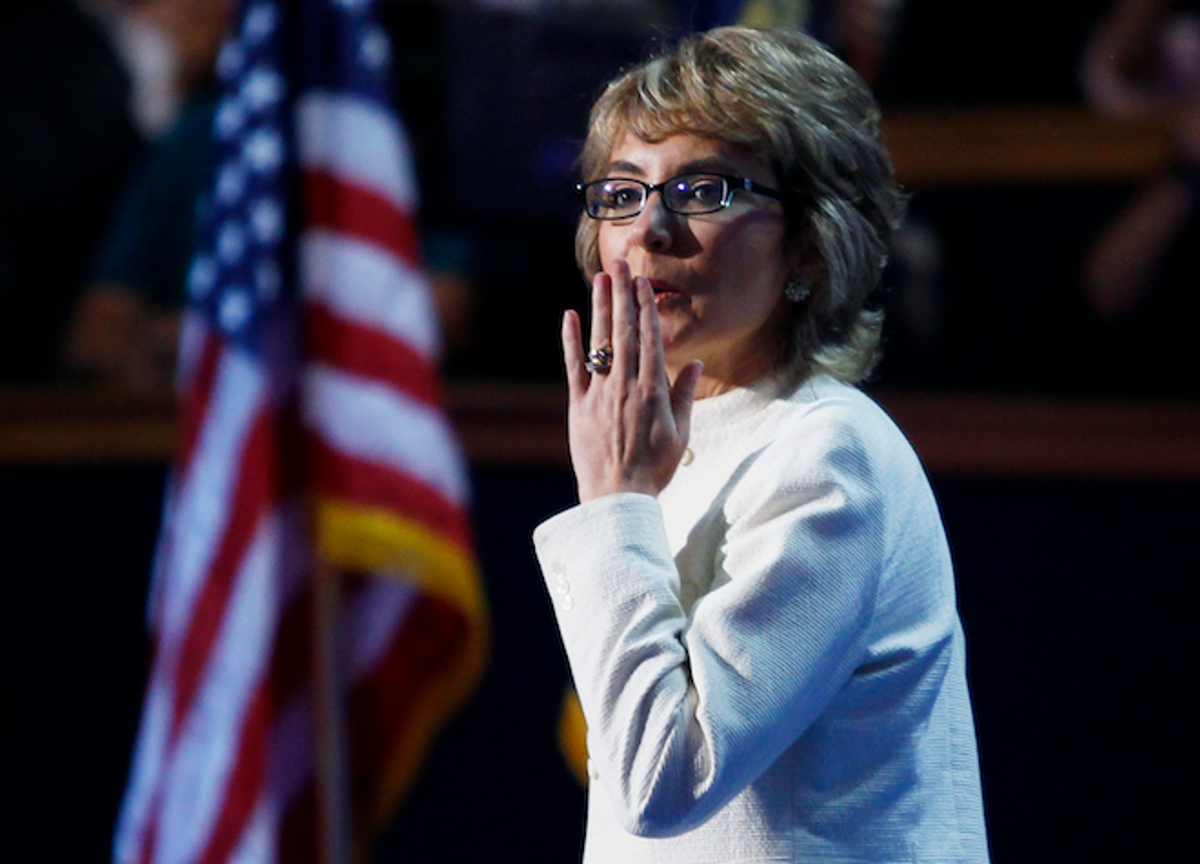 Former congresswoman Gabrielle Giffords blows a kiss after after Giffords led the convention in the U.S. Pledge of Allegiance during the final session of the Democratic National Convention in Charlotte, North Carolina September 6, 2012. (Reuters/Jessica Rinaldi)
--

CHARLOTTE, N.C. -- Despite a recent string of tragic mass shootings, both parties’ national conventions steered completely clear of gun policy. Guns only got passing references at both conventions, but gun control was never mentioned at the Democratic convention, disappointing anti-gun violence activists. This, despite the fact that former Rep. Gabby Giffords was front and center last night when she led the Pledge of Allegiance.

“Obviously, we would have hoped that it would have been brought up as an issue by someone,” said Ladd Everitt, the communications director of the Coalition to Stop Gun Violence. The only reference to guns he heard was when Montana Gov. Brian Schweitzer attacked Mitt Romney for raising the fees on gun licenses as governor of Massachusetts. “So it’s certainly not quite the result we wanted on the Democratic side, but it was also very fascinating to just not -- I don’t recall hearing a Republican speaker explicitly talk about the right to keep and bear arms. So it was interesting to me that it didn’t really play on either side.”

After the shootings in Aurora, Colo., and the Sikh Temple in Wisconsin, gun control got put back on the agenda -- briefly. Democratic Sen. Frank Lautenberg and Rep. Carolyn McCarthy, who have long led efforts to introduce common-sense gun laws, found new energy around a bill to ban high-capacity magazines for assault weapons. But many, if not most, Democratic lawmakers stood on the sidelines. When the shootings fell out of the news cycles, the bills, which were probably destined to fail anyway in the Republican-controlled Congress, also faded from the spotlight.

“I think they both made the calculation that this is not an issue where we are going to reach enough people to turn that swing vote in our favor ... There might have been, on the Republican side, a little hesitancy to chest-beat on this because of the mass shootings,” Everitt said.

“[But] that certainly plays into our disappointment on the Democrats not being willing to at least mention it. While we might not have expected them to make it a key issue in the speeches, it would have been nice to have heard the issue addressed,” he added.

UPDATE: Stop Handgun Violence founder John Rosenthal said it's "incredible" that Democrats failed to address gun control: "The NRA has so intimidated the Democrats into submission that gun violence prevention has become radioactive," he said. "Over 30,000 Americans die every year. Over 30 years, more American died from guns in the United States than all U.S. servicemen and women killed in all foreign wars combined, and it doesn't reach the importance of a platform or a priority?... It's so outrageous," he said.