At least 64 deaths have been reported 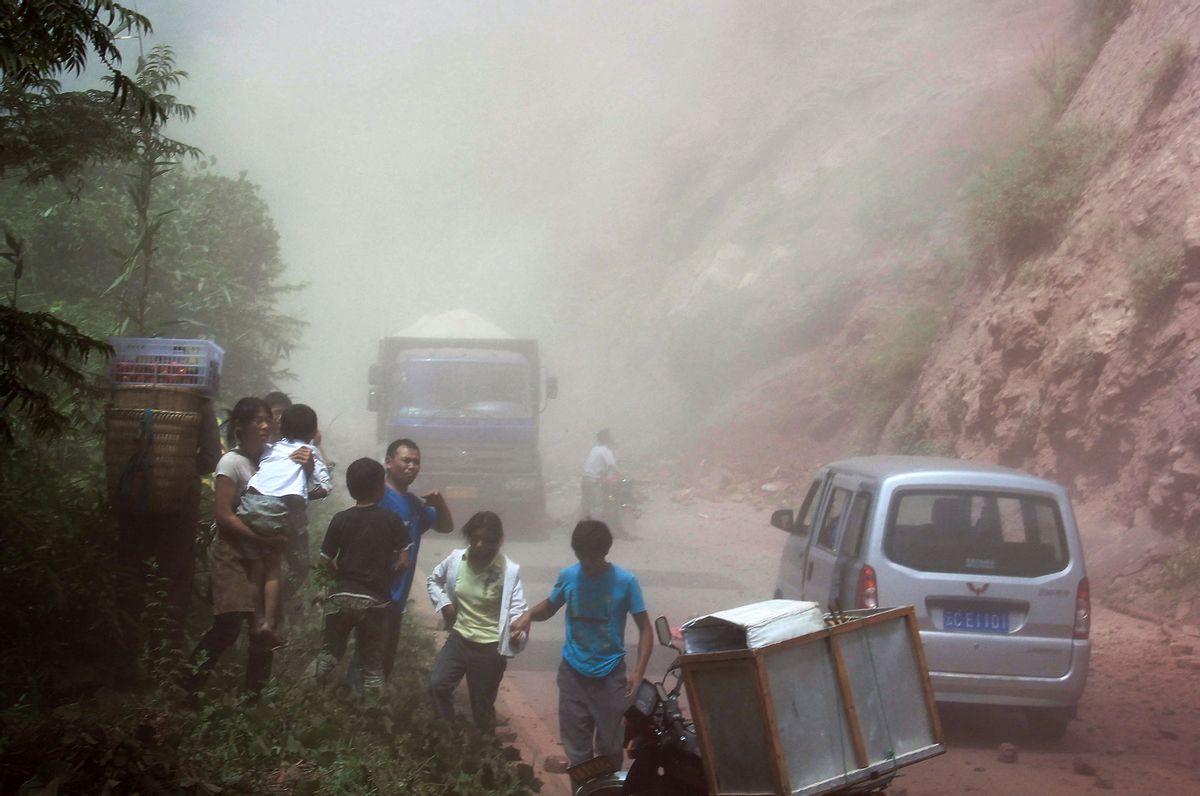 People run as rocks fall near their vehicles after the area was hit by an earthquake in Zhaotong town, Yiliang County, southwest China's Yunnan Province, Friday, Sept. 7, 2012. (AP Photo) CHINA OUT
--

BEIJING — A series of earthquakes collapsed houses and triggered landslides Friday in a remote mountainous part of southwestern China where damage was preventing rescues and communications were disrupted. At least 64 deaths have been reported.

The quakes started with a 5.6-magnitude shock before 11:30 a.m. along the borders of Guizhou and Yunnan provinces, and another equally big quake struck shortly after noon followed by more than 60 aftershocks, Chinese and U.S. government seismologists said. Though of moderate strength, the quakes were shallow, which often causes more damage.

Hardest hit was Yiliang County, where all but one of the deaths occurred, according to the Yunnan provincial government’s official website. Another 715 people in the county were injured, the sites said. Yiliang county’s high population density, weak building construction, and propensity for landslides were blamed for the relatively high death toll.

China Central Television showed roads littered with rocks and boulders, and pillars of dust rising over hillcrests — signs of landslides. Footage showed a couple hundred people crowding into what looked like a school athletic field in Yiliang’s county seat, a sizeable city spread along a river in a valley bottom.

With some roads impassable, rescuers had yet to reach some outlying villages and towns, the official Xinhua News Agency said.

Though quakes in the area occur frequently, buildings in rural areas and China’s fast-growing smaller cities and towns are often constructed poorly. In 2008, a magnitude-7.9 quake that hit Sichuan province, just north of Yunnan, killed nearly 90,000 people, with many of the deaths blamed on poorly built structures, including schools.

Friday’s quakes destroyed or damaged almost 30,000 homes across several counties and townships, the provincial government website said. The Yunnan seismology bureau said more than 100,000 people were evacuated from their homes. All told, Xinhua said, 700,000 people had their lives disrupted by the quake.

In Luozehe, a town in Yiliang near a zinc mine, residents and state media said boulders hurtled off hillsides and houses collapsed.

“It is scary. My brother was killed by falling rocks. The aftershocks struck again and again. We are so afraid,” Xinhua quoted miner Peng Zhuwen as saying.

Wu Xuhong, a goat herder in Luozhe, said only tiles fell from his relatively solid cement and brick sheds.

“But I heard that a lot of buildings built of clay and wood collapsed and we temporarily lost power and mobile phone signal,” Wu said.

Red Cross spokesman for East Asia, Francis Markus, said 2,000 quilts, 2,000 jackets and 500 tents were being rushed to the area, one of China’s poorest, which is largely inhabited by members of the Yi ethnic minority.

He said the use of light construction materials would likely create far more injuries than deaths.

A government official in Jiaokui town said a large number of houses had collapsed.

“The casualty number is still being compiled. I don’t know what it was like for the other towns, but my town got hit badly,” he said. Like many Chinese officials, he refused to give his name.

Mobile phone services were down and regular phone lines disrupted. Phones were cut off to clinics in four villages in Qiaoshan, another town in Yiliang, which has about half a million people.

Authorities sent thousands of tents, blankets and coats to the area, Xinhua said.

It said that so far no casualties had been reported in neighboring Guizhou, but that homes had been damaged or destroyed there.

Friday’s quakes were relatively shallow, about 10 kilometers (6 miles) deep, creating an intense shaking even at a lower magnitude.

By comparison, the 7.6-magnitude quake that struck Costa Rica this week was 41 kilometers (25 miles) below the surface, and combined with strict building codes, kept damage and deaths to a minimum.

China Earthquakes From The Wires