"We don't turn back"

An older, wiser Barack Obama talks to anxious voters and tells Democrats to forgo cynicism and fight for change 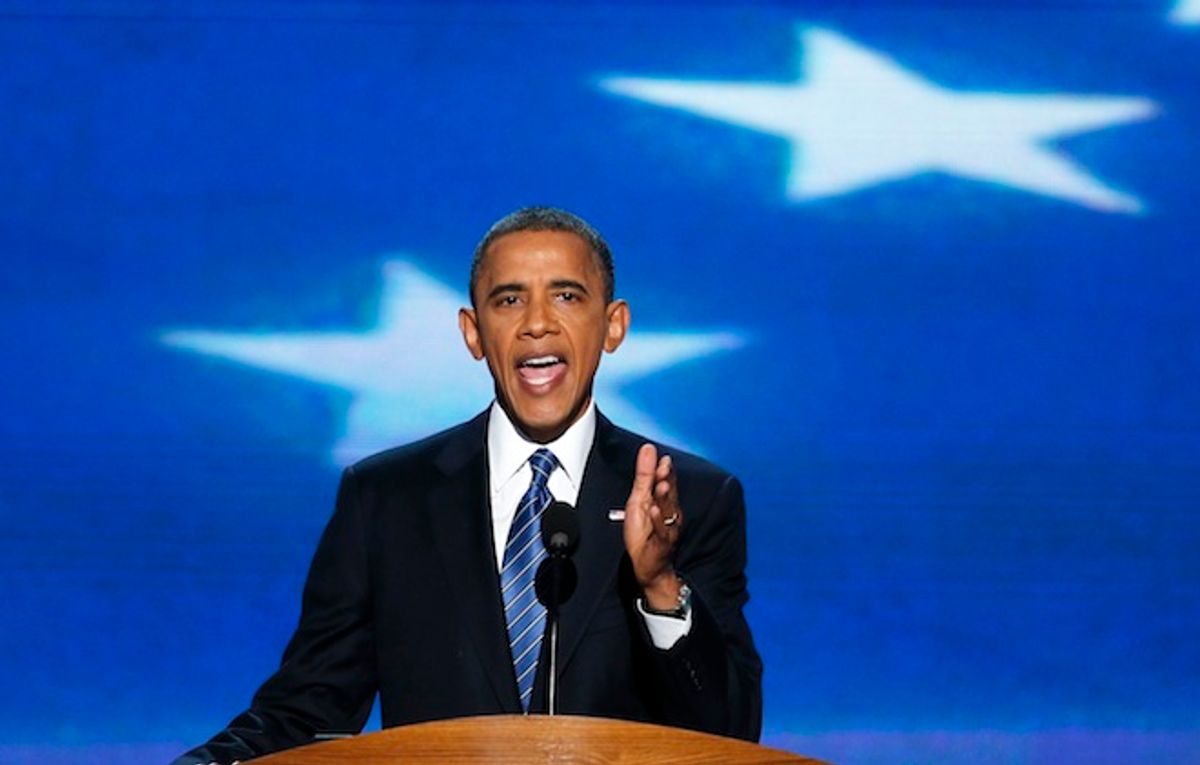 A sober, occasionally somber Barack Obama accepted his delirious party's nomination for the presidency Thursday night. On the third and final evening of a high-energy convention, following over-the-top speeches by Michelle Obama, Bill Clinton and finally Vice President Joe Biden, the crowd was ecstatic, the president less so.

"I recognize that times have changed since I first spoke to this convention," he told them.  "I’m no longer just a candidate.  I’m the president." Wild cheers erupted, as if it was an applause line, but Obama stayed serious.

After feisty speeches by Clinton and Biden touting his record, Obama spent as much time acknowledging what hasn't been accomplished in his first four years. He made an open pitch to the disaffected: "If you turn away now – if you buy into the cynicism that the change we fought for isn’t possible … well, change will not happen." The president seemed to be speaking to swing voters who don't yet feel the economic recovery.

Obama's speech was not devoid of rousing moments or pride in his accomplishments. The president built on the "We're all in this together" theme we heard all week, and developed the argument he's been making for the last year: "this country only works when we accept certain obligations to one another, and to future generations."

As if replying to a GOP convention remarkable for its nostalgia, Obama praised what was good about the good old days, in Democratic terms: "My grandparents were given the chance to go to college, buy their first home, and fulfill the basic bargain at the heart of America’s story:  the promise that hard work will pay off; that responsibility will be rewarded; that everyone gets a fair shot, and everyone does their fair share, and everyone plays by the same rules – from Main Street to Wall Street to Washington, D.C."

He went straight to the hollow core at the center of the GOP pitch with his best lines of the night, mocking the Republicans for trying to solve economic problems caused by George W. Bush with another dose of Bush policies. His opponents' only answer to the country's troubles, he said, amounted to:

“Deficit too high? Try another.”

“Feel a cold coming on? Take two tax cuts, roll back some regulations, and call us in the morning!”

And he hit Mitt Romney surprisingly hard for his foreign policy weakness and American declinism. "My opponent and his running mate are … [pause] …new [pause] to foreign policy." He went on: "You don’t call Russia our No. 1 enemy – and not al-Qaida – unless you’re still stuck in a Cold War time warp.  You might not be ready for diplomacy with Beijing if you can’t visit the Olympics without insulting our closest ally." He turned around an old Republican rap on Democrats, as being too critical of our great country. "Our friends at the Republican convention were more than happy to talk about everything they think is wrong with America, but they didn’t have much to say about how they’d make it right."

All week long it was remarkable the extent to which Obama has succeeded in flipping that old script. For the first time in a half-century, perhaps since Truman "lost" China, according to GOP red-baiters, Democrats have taken back the issues of foreign policy and security (with some unfortunate hawkish side effects). Republicans are the ones who seem to have given up on America and wring their hands that the country is in decline. Democrats are the ones who remember to thank the troops in a time of war.

Fighting that other old GOP slur – that Democrats are the party of wasteful big government -- Obama walked a careful line. Restoring economic prosperity, he said, "will require common effort, shared responsibility, and the kind of bold, persistent experimentation that Franklin Roosevelt pursued during the only crisis worse than this one" – but then he kicked a straw man. "And by the way – those of us who carry on his party’s legacy should remember that not every problem can be remedied with another government program or dictate from Washington." There's not a single Democrat who believes that, of course.

Yet parts of the speech represented Obama's most passionate defense of the Democratic legacy – and his most stinging rebuke of the scapegoat politics perfected by the modern GOP. "We don’t think government can solve all our problems.  But we don’t think that government is the source of all our problems – any more than are welfare recipients, or corporations, or unions, or immigrants, or gays, or any other group we’re told to blame for our troubles." He mocked Romney's famous riff about how young people should get started: "If you can’t afford to start a business or go to college, take my opponent’s advice and 'borrow money from your parents.'" And he offered perhaps his feistiest rejoinder to GOP budget plans:

I refuse to ask middle class families to give up their deductions for owning a home or raising their kids just to pay for another millionaire’s tax cut.  I refuse to ask students to pay more for college; or kick children out of Head Start programs, or eliminate health insurance for millions of Americans who are poor, elderly, or disabled – all so those with the most can pay less.

And I will never turn Medicare into a voucher.  No American should ever have to spend their golden years at the mercy of insurance companies.  They should retire with the care and dignity they have earned.  Yes, we will reform and strengthen Medicare for the long haul, but we’ll do it by reducing the cost of health care – not by asking seniors to pay thousands of dollars more.

Still, I was struck by the extent to which we saw an older, wiser, maybe even more serious Obama in Charlotte. He didn't have that pleased with himself look. He didn't laugh at his own jokes. When he noted, "If the critics are right that I’ve made all my decisions based on polls, then I must not be very good at reading them," the crowd chuckled, but he didn't.

And he ended on a fairly sober note. "America, I never said this journey would be easy, and I won’t promise that now.  Yes, our path is harder – but it leads to a better place.  Yes our road is longer – but we travel it together.  We don’t turn back.  We leave no one behind.  We pull each other up. We draw strength from our victories, and we learn from our mistakes." Obama's speech seemed pitched most keenly to undecided voters who are worried about the country's path, and yet trust that Obama cares about them more than Romney does. We'll see in the coming days whether they heard him.