Dems swamp the GOP in urban areas, but act embarrassed of the progressive values that make cities great 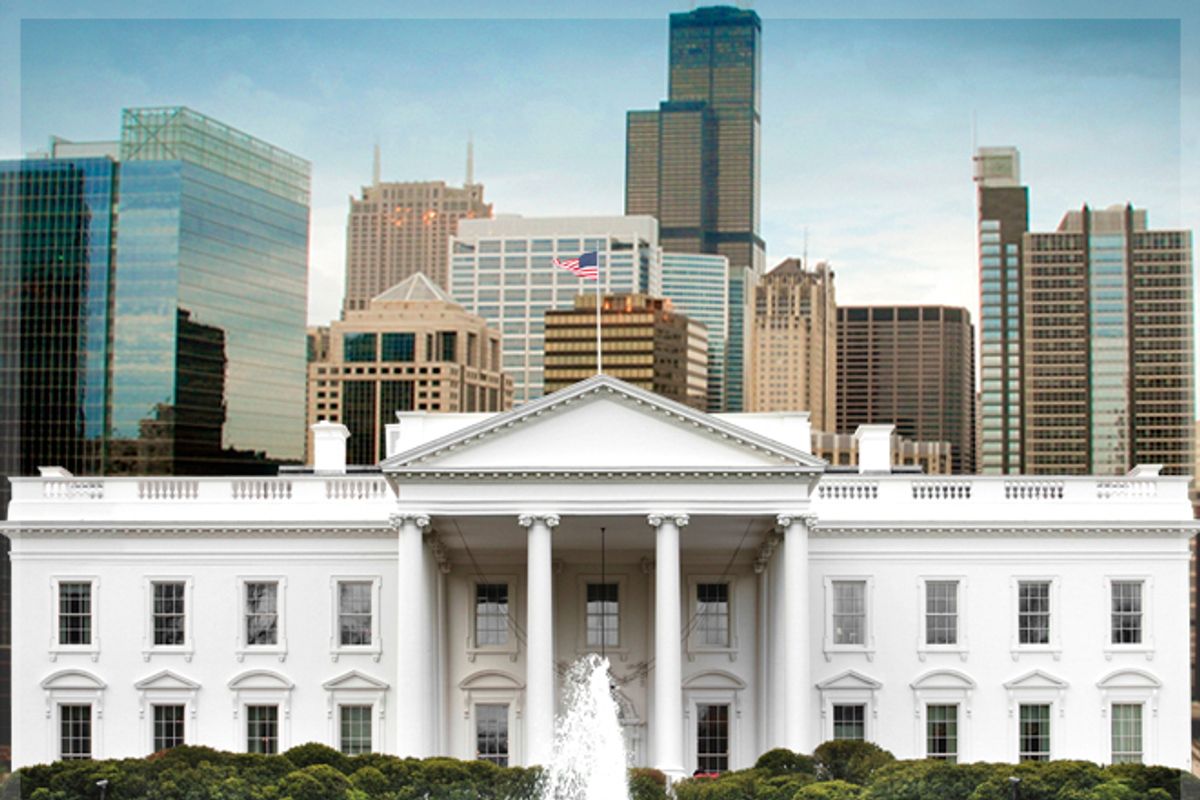 As the Democrats packed up and left Charlotte, N.C., this week, the New York Times posted a nifty interactive feature that let you see how often certain words and phrases were used in speeches at both parties' conventions. The usual suspects got plenty of mentions: families, middle class, American dream. And the ones that almost never get mentioned -- cities, urban, transit, sprawl -- didn't get mentioned once again.

The Republicans have been giving urbanites the one-finger salute for decades. Four years ago, Sarah Palin's casual declaration that cities aren't part of "real America" was outrageous, but not surprising. To the GOP, real America is small-town America, exurban America, and the party is not ashamed to make it clear that those are the citizens it represents.

The Democrats, on the other hand, represent big cities and the urban-ish inner-ring suburbs that abut them. In 2008, by winning 10 large urban areas, Barack Obama swamped John McCain's victories in 2,553 rural counties. Yet Democrats act embarrassed to be the party of urban America. There's no proud rhetoric championing cities to match the GOP's glorification of the sprawl that surrounds them. "Democrats don't do this," said Bill Maher. "[California governor] Jerry Brown doesn't stand under the Hollywood sign and say ... 'You here in Hollywood are the real Americans.' It never happens."

Today, both sides of the aisle save their shout-outs for working moms, Main Street and "pain at the pump." We hear about families struggling with mortgage payments, not tenants worried about the rent. Political ads are soaked in images of small-town storefronts, porches and rolling farmland. Positive discourse about urban values is so nonexistent that the very phrase "urban values" sounds weird.

But why should it? Urban values are some of the best America has. Cities are open-minded places that are more welcoming of diversity; studies back up the stereotype. They prioritize education: One in three urbanites has a college degree, twice as many as rural residents, which is part of the reason the lion's share of new inventions come from cities. Urbanites consume less energy and spew fewer greenhouse gases into the air. And urban states suck less from the government teat: $1.10 for every dollar they contribute, as opposed to $1.40 for rural states.

This is not a slam of rural areas. It's a call for politicians to start balancing out the endless chorus of praise for the Heartland with some much-deserved rhetoric extolling urban virtues. And if the Democrats won't do it, then a new party should. "It would be intriguing in the primaries to have a Cities or Metro candidate," says political commentator and writer E.J. Dionne Jr., "someone who tries to call attention to these issues."

Imagine a Cities Party with a rabble-rousing candidate who speaks for cities, someone who's more concerned with urbanizing the debate than ultimately winning the White House. An outspoken advocate who's not afraid to say that density is good and that gas is way too cheap, and passionately argue that mass transit, bicycle and pedestrian infrastructure, inner-city schools, and issues that deeply affect cities -- like pollution and homelessness -- deserve more airtime.

"You can block a bill in the Senate with 41 senators representing something like 11 percent of the population," says Dionne, citing an example of rural America's disproportionate influence. "And the political campaigns have an anti-city bias because so much of the swing vote is in the suburbs." The system is stacked against the cities, and no politician in either major party is going to give cities the attention that a Cities Party candidate could.

To see just how far urban issues have fallen on the national agenda, look to 1980, when, according to the New York Times, a major party platform "highlighted the need for 'dependable and affordable' mass transit in cities, noting that 'mass transportation offers the prospect for significant energy conservation.'" To be clear, that was the 1980 Republican platform.

Thirty-two years later, we have a former community organizer as president, a man who once worked in inner-city Chicago; if anyone is going to focus on cities, it would be this guy. And he's done some good stuff. President Obama created an Office of Urban Policy, the White House's first city-dedicated initiative since the Carter days. He's integrated the departments of Transportation, Housing and Urban Development, and the Environmental Protection Agency to streamline solutions for cities and, as it's frequently described, "break down the silos." He's farmed out money to cities looking to revitalize their downtowns, and doled out generous TIGER grants for projects like light rail, streetcars and bus rapid transit.

But for all the excitement about what the "first urban president" in generations might do -- a president that the Washington Post once predicted was "quietly beginning the most ambitious new policy for the nation's cities since the Great Society programs of the 1960s" -- it's hard not to be a little bit disappointed by the last four years. There's no palpable unified urban vision coming from the White House, and Obama's relationship with his urban supporters is basically the same don't-ask-don't-tell friendship the Democrats always offer. "Obama's approach to the cities has been a detached one," wrote Time magazine in 2010, "favoring a broadly palatable 'metropolitan policy' that encourages cooperation between cities and suburbs."

It's true that metro areas, as opposed to cities proper, can in certain ways be a more convenient way to dictate policy -- commuters and economies blur the borders of urban spaces. But focusing on metro areas, which can include suburban towns an hour from the urban core, is also a convenient way to avoid associating your administration with the city itself. For Obama, this is particularly thorny territory. The right wing is hyper-attuned to any sign that he's secretly handing out welfare checks. And I can see why it would seem good for cities to have urban initiatives funded quietly rather than make a big stink about them and risk a backlash. Why rock the boat?

But the hush-hush approach has its drawbacks. "[W]e already know what Obama's legacy generally will be in urban policy. Much like Clinton, he will be able to claim credit for some modest improvements," wrote Ben Adler in Next American City in April. "But in scale they are nothing like the War on Poverty or the Great Society. For those of us who think suburban sprawl is a pox on American society, the Obama presidency will be -- like Clinton's -- another missed opportunity." You can't transform a 60-year-old sprawl-oriented paradigm when you're on the down-low.

Especially when the Republicans are as vocal on these issues as the Democrats are quiet. The GOP forcefully campaigns against density, transit, smart growth, and bike and pedestrian infrastructure. They gutted this year's federal transportation bill of some of its most urban-friendly properties. They openly call the non-binding smart-growth guide known as Agenda 21 a conspiracy theory. This year's official Republican Party platform explicitly criticizes the "urban vision of dense housing and government transit," calling it "social engineering."

Obama hasn't failed cities -- far from it. He's done a lot, as have many other Democrats. And lord knows he's working in a nearly impossible political climate. But while the Democrats may be the party of urban America, a party that's quietly and apologetically pro-city is not really a pro-city party at all. Republicans don't lower their voices when pushing policies that benefit small towns. Yet less than six months into his term, Obama had downgraded the Office of Urban Policy to the Office of Urban Affairs, "a small but significant name change that suggested that the office won't be robust," wrote Politico. Its chosen czar was a two-term Bronx borough president whom many saw as vastly underqualified (and who left in just over a year), and its core staff soon shrank from six to just two. "I thought the office would do more in public to generate momentum behind a broader kind of urban agenda," the Drum Major Institute's senior adviser on federal urban policy told City Limits magazine. "That hasn't happened."

Americans don't like third-party candidates, and for good reason. They risk splintering the base of whichever party they're more closely aligned with. But a Cities candidate needn't be in it to win it. He or she could exist only to adjust the discussion, and even run as a Democrat during the primaries, but ultimately support another nominee, the way Ron Paul runs as a Republican to inject his libertarian ideals into the discourse, even though he knows he has no chance of winning the nomination. Earlier this year, at the GOP debate in New Hampshire, Paul started talking about the racism of the Drug War, how it was a shameful policy that disproportionately incarcerated blacks. Blank stares ensued. But he got the issue onto the stage -- two full minutes of high-profile national airtime. Imagine a similar platform for urban-oriented issues.

Obama can't do this. It would seem too kooky. "Obama learned from Al Gore not to talk about smart growth, but that doesn't mean he hasn't pursued it with a vengeance -- ignoring his blind spot about using roadway expansion to create jobs," says Jeff Speck, a city planner and author of "Walkable City" (who, for the record, thinks a Cities Party is a terrible idea). But if Obama can't make the case for smart growth, a Cities candidate could. Speck also believes cities are too different from each other for a Cities Party to be viable.

But the big-tent problem will always be present, and just because no Cities Party could represent every urban dweller everywhere doesn't mean they couldn't speak up for urbanism in general. Cities generate the majority of America's wealth, its culture, its innovations and its highly skilled workers, and that's expressly because good urbanism sets the stage for those conditions to be possible. "I think we'd just like more of a recognition that cities are America's economic heartland, that they're great things," urbanist Edward Glaesar said recently. Small-town America has been thoroughly mythologized. It's time for cities to get their due.