If you're looking for some peace and quiet, the Bose QuietComfort 15 is the way to go 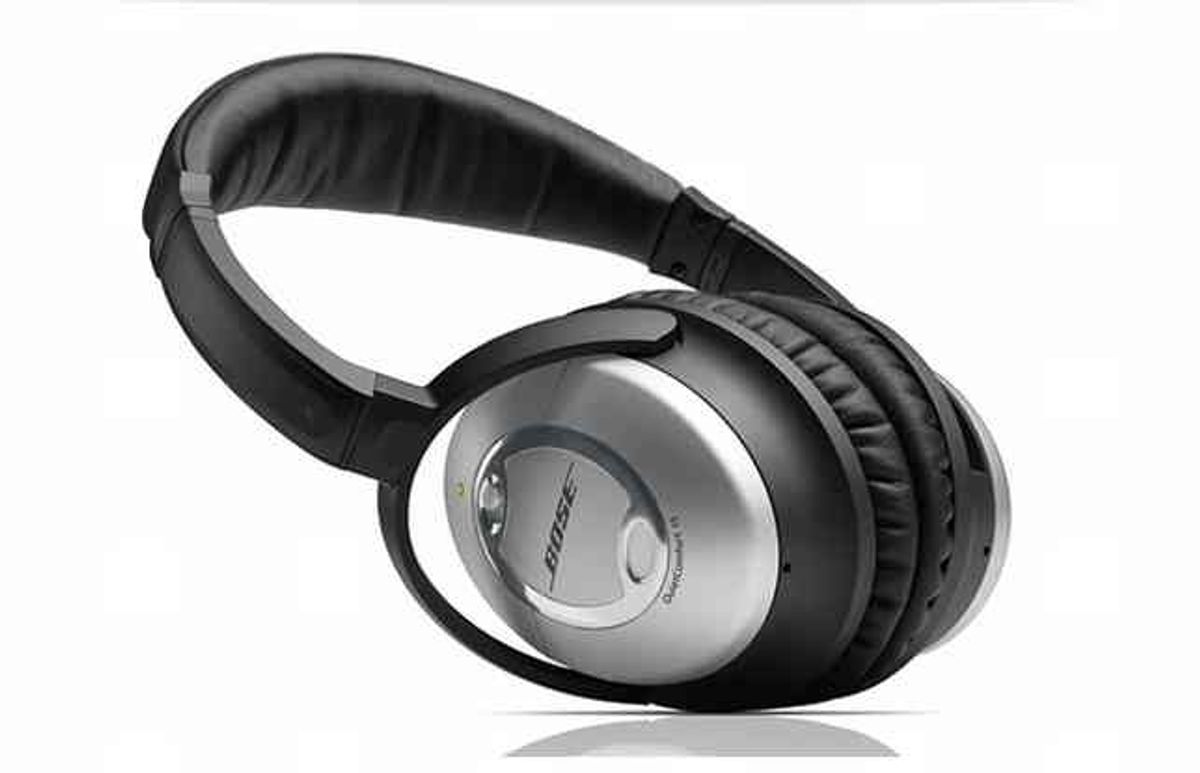 When it comes to noise-canceling headphones, I’d buy the $300 Bose QuietComfort 15 headphones.

They offer the best noise canceling available, and sound decent to boot. I make this pick based on the reviews and opinions of the top headphone reviewers, plus having reviewed the QC15s and its competitors myself.

Who am I? I’ve been reviewing audio for over a decade for a number of magazines and websites. But to help me nail this pick, I also interviewed several of the top headphone reviewers around. Steve Guttenberg is one of the most respected audio reviewers in any medium, having written for Home Theater, Home Entertainment, Stereophile, as well as his own blog at CNET called The Audiophiliac. Tyll Hertsens is editor in chief of InnerFidelity, a sister site to Stereophile, and does some of the most extensive headphone testing out there. Brent Butterworth was editor in chief of Home Theater, Home Entertainment, and is currently West Coast tech editor of Sound+Vision magazine. He does some of the most comprehensive headphone testing on the web, so much so that several headphone manufacturers have come to him to see how to do it. These are the experts I generally talk with about gear.

First, if you’re curious how noise-canceling headphones work, I recommend reading this article from HowStuffWorks.

Geoffrey Morrison, of Sound+Vision magazine… hey, wait a second, that’sme, said: “if you’re buying noise-canceling headphones specifically for the noise canceling, the Bose QC15s are the absolute choice.” At lower frequencies, the QC15s reduced noise by up to 26 dB more than competing headphones. That’s a ton. When it comes to noise canceling, they really are that much better than other headphones.

Where the Bose falters in every review, and among the experts I interviewed, is in sound quality. No one seems to think the QC15s sound bad, but all say there are other options that sound better. Back to Butterworth: “The sound is OK. A little dull for my taste, but obviously a lot of people like it.” And Guttenberg: “If sound quality is a priority the Bose scores lower than the PSB M4U 2 and Polk UltraFocus 8000.” Those two models came up repeatedly when discussing noise cancellers as alternatives to the Bose.

The M4U 2 headphones, by storied speaker company PSB, gets praise as one of the most accurate and best sounding headphones on the market. However, they can’t hold a candle to the Bose’s noise canceling. “In my opinion, the M4U 2’s are the best-sounding NC headphones you can buy," Butterworth said. "Only the best of the big, open-back audiophile headphones (such as the HiFiMan HE-500) can beat it. The comfort and build quality are superb." When he reviewed them for S+V, as part of a huge multi-headphone/multi-panelist roundup feature, Butterworth concluded that, “Not only does the M4U 2 sound like a really great speaker, it sounds like a great speaker in a great listening room.”

These PSB M4U 2 Headphones are the best sounding noise-canceling headphones around, at $400. Still the Bose are better at canceling noise.

Tyll Herstens, in his roundup of noise-canceling headphones, found the Bose to be the winner, but placed the PSBs only third. He liked the Polk UltraFocus 8000 better, saying, “Holy guacamole, do these sound good! Easily the best sounding headphone of the bunch.” I’ve heard the Polks, and I’m not as much of a fan. They sound good, but I think the PSBs sound better. However, in neither case is the noise canceling as good as the Bose. Also, the Polks are $50 more than the Bose, and are larger. So, for me, it really comes down to the PSB headphones as the step-up from the Bose for people prioritizing audio quality.

As I wrote previously, “It comes down to this: If you’re just in the market for headphones and you think you’d occasionally use the noise canceling, get something else. The sound quality from the PSBs is incredible, and much better than the Bose. The noise reduction isn’t as good, but it’s still decent. However, if you’re buying noise-canceling headphones specifically for the noise canceling, the Bose QC15s are the absolute choice.”

One more thing: The PSBs run $100 more than the Bose. However, they have a passive mode, as in they’ll work when the battery runs out. The Bose, like many noise-canceling headphones, cease all sound when the battery dies, or if you turn them off.

There are two slightly lower-priced options that are well reviewed, although neither offers the sound quality of the Polk and PSBs, or the noise-canceling prowess of the Bose. Butterworth really likes the AKG K 490 NC ($250): “The sound quality is excellent, with a neutral tonal balance, a just-right amount of bass, and clear, spacious highs. Because it's an on-ear, it's not as comfortable as the others here, and it's not as effective at blocking environmental noise.” Having tried the K 490 NC back-to-back with several other headphones, I agree with Brent, though I found them to be a little too light in the bass (admittedly, I like a slightly warmer sound). Given that the Bose are only $50 more, the K 490 NCs are a tough sell, given they aren’t as comfortable, and don’t block or cancel as much noise. So, forget about them and get the Bose…or the Audio Technicas (below).

These $120 Audio Technica ATH-ANC7B headphones are our budget pick, but nowhere near as good as the Bose QC15, our main choice.

If you really can’t stretch to $300, Herstens is a fan of the Audio-Technica ATH-ANC7b ($220, though you can find them as low as $120), saying: “No, it's not quite as comfortable, not quite as quieting, and not quite the sound quality of the Bose, but the little 7b does manage to deliver the second-best listening experience of the bunch for me. I definitely recommend the Audio-Technica ATH-ANC7b, a competent noise canceler with good sound at a very good price.” Butterworth was a little less enthusiastic, saying: “These are OK for the price. Average NC capability, OK (somewhat QC15-like) sound quality, pretty good comfort. A reasonable, low-priced alternative to the QC15. You get what you pay for….” I agree more with Brent, finding them a little boomy, but having decent treble. At $120 they're a reasonable option, but the Bose are significantly better.

There are dozens of other noise-canceling headphones on the market, and while the QC15 is easily the most common winner in subjective testing, finding runners-up is difficult. No reviewer has heard them all (there are too many), and there are only a few reviewers that also do objective measurements in addition to subjective listening tests. Worse, the vast majority of reviews are done by non-audio reviewers, making their judgments on sound quality highly suspect (or, in my honest opinion, irrelevant).

There is consensus, however, that because of the added complexity of the noise canceling (which includes a microphone, processing and amplification), it’s not currently possible to do decent noise canceling on the cheap.

And that can be seen with the many bad noise-canceling headphones out there. This shouldn’t be too surprising, as there are a lot of bad-sounding regular headphones, too. One that comes to mind is the Soul by Ludacris SL300WB. These $300 ($220 on Amazon) headphones are extremely comfortable, and sound best when left in the box. One reviewer actually said, “I HATED these.”

The uber-popular Beats by Dre Studio ($299) don’t hold up to critical ears. Herstens found that “overall, the listening experience is fairly good. Unfortunately, the noise-canceling performance is pretty poor,” and “they don't measure up to the more serious noise-canceling headphones.”

On the cheaper side, the $100 ($70 on Amazon) Creative HN-900’s were “less effective than most NC headphones I’ve measured,” according to Brent’s review. “While the HN-900 looks like a great deal at $99, in this case we feel you cut quality when you cut your budget.”

The Tivoli Audio Radio Silenz ($160) look cool, and do offer noise reduction for less money than the Bose, but as Michael Berk, web editor for Sound+Vision, wrote: “I didn't love Tivoli's noise cancelation. On the positive side, when switching it on there's little effect on the overall sound signature … but outweighing that is the fact that the circuit introduces a large amount of residual high-frequency hiss.”

Herstens, in my interview with him, raised an important point: “Noise-canceling headphones are a strange beast. The big problem is the noise-canceling circuitry and methods always seems to introduce problems in sound quality. In general, I think noise-canceling headphones should be a choice of last resort. If you're going to be using your cans only occasionally in very loud environments (trains and planes), I'd suggest a good sealed headphone and just put up with the extra noise those times when in loud environments. The sound quality will be better. If you're traveling or in loud environments a lot, good in-ear headphones will provide as much or more isolation and much better sound. But if you can't stand putting something in your ears, and you will be in loud environs a lot, noise cancellers is a good choice.”

If the Bose, and even the Audio Technicas, are out of your price range, I’d recommend getting a decent pair of noise isolating headphones, instead of a cheap pair of noise canceling. This is because the quality of the headphones (sound, build, etc), will be better without a mediocre noise-canceling circuit. Decent earbuds, well sealed in the ear canal, can reduce a lot of ambient noise, and sound great while they’re in there. We like the Velodyne vPulse In-Ear Headphones for around $100, or the under-$10 Monoprice 8320.

One last point. Headphones, unlike speakers, are highly dependent on your individual head, ear, and ear canal. Where superior speakers are going to sound good to just about everyone, even the best headphones might not sound perfect to everyone. A consensus of decent sound quality among reviewers merely suggests that most people will like said headphones, not a guarantee. I recommend, if possible, listening to the PSB and Bose headphones back to back. Not easy for most people, of course, so at least buy them from a store (like Amazon) with a liberal return policy. Also, most noise-canceling headphones, including the Bose, can create an odd pressure sensation when they’re active. It’s mild, but it’s worth checking to see if it bothers you before you commit to buying them.

So if you’re looking for headphones that offer the best (as in most) noise canceling, the Bose QuietComfort 15 is my pick.