The GOP nominee immerses David Gregory in a lukewarm bath of platitudes, a couple of lies and a splash of news 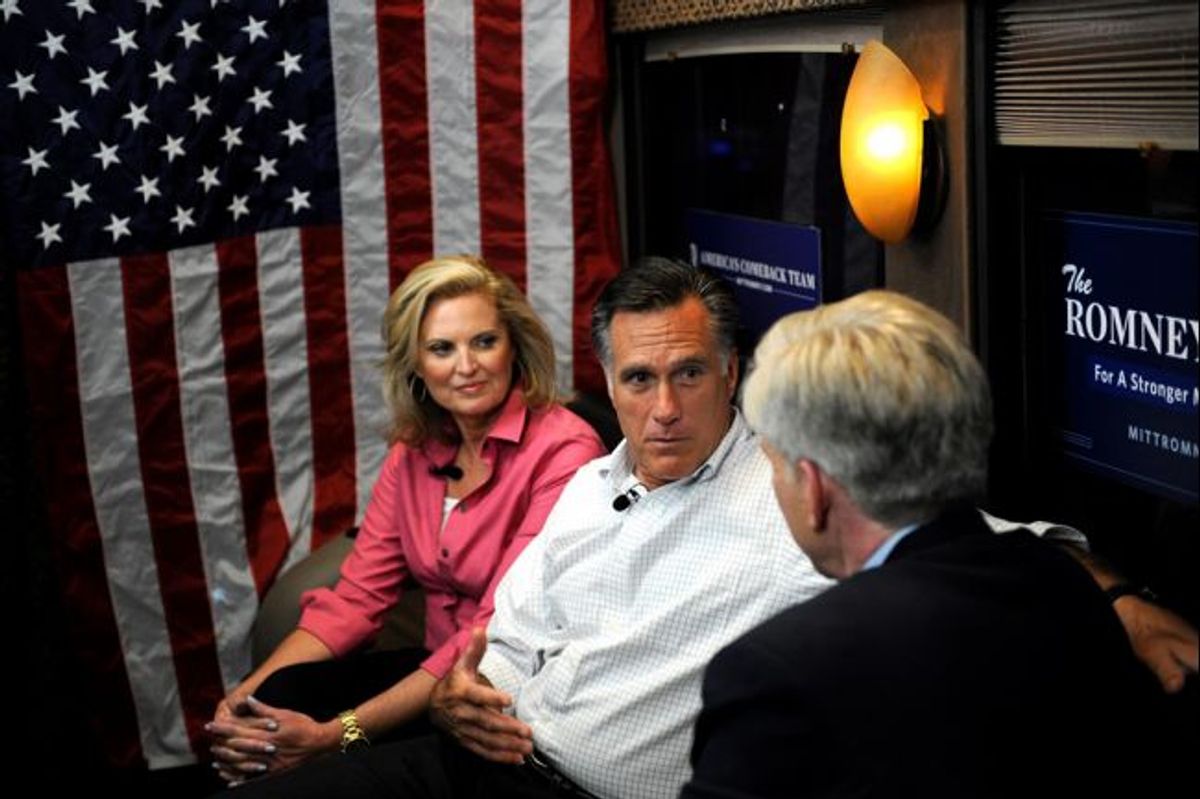 With a "Juntos con Romney" placard placed strategically behind him, the presidential candidate currently attracting 26 percent support from Latinos told David Gregory he's fighting for "the middle class that have been crushed under this president." But he stumbled when asked if he ever spent time with the unemployed, telling Gregory "Well -- actually -- just -- last night it was. I was with -- a person who is facing some challenges." He was then unable to describe those challenges.

In an interview widely derided for a shortage of follow-up questions, Gregory actually got Romney to make some news. Romney told Gregory he "likes parts of" Obamacare, and that he would leave in place the prohibition against excluding people with preexisting conditions and the policy that lets young adults stay on their parents' insurance policies "up to whatever age they might like," Romney said, rather unbelievably. "I say we're going to replace Obamacare. And I'm replacing it with my own plan. And even in Massachusetts when I was governor, our plan there deals with preexisting conditions and with young people." Ann Coulter has not  yet called Romney a "moron" as she did his spokeswoman Andrea Saul when Saul likewise praised Romneycare.

Romney also said "it would be my preference" if Supreme Court justices he appointed "reverse Roe v. Wade."  In Tampa, trying to distract from the GOP's horrific antiabortion platform, he ducked the question by saying "it's a matter for the courts," seeming to ignore his role in appointing justices. Romney also pledged to reverse President Obama's decision to provide funding to international groups that use non-U.S. funding to either provide abortion services, or merely mention them as an option for pregnant women (widely known as the "global gag rule" or the "Mexico City rule").

Fiscal hawks should take note: Romney wouldn't commit to balancing the budget until the end of his second term, and maybe even as late as 2023; his running mate Paul Ryan's budget won't balance until 2040. There is a range of opinion on when Obama's plan would balance the budget (and he can't do it without Congress, anyway) but by some projections it's sooner than Romney will. And he attacked the defense-cutting sequestration bill Ryan voted for, insisting that the Republican Party was wrong to make that deal with Democrats.

Other than that, Romney's half-hour with Gregory was like sitting in still-warm reused bathwater, with a film of half-truths and a couple of outright lies in the tub too.  Ann Romney was present for the first half, mostly looking on worshipfully. The first spouse to accompany her presidential candidate hubby to "Meet the Press," she  wasn't much of a factor, though she pushed back against claims that even after her convention speech proclaimed "I love you women!" people aren't feeling much empathy from her or her husband.

Romney deserves credit for admitting that, despite her convention stories of using an ironing board as a dining room table and eating a lot of tuna and pasta as a young married couple, "our struggles have not been financial." She pointed to her battle with multiple sclerosis as an example of hard times for her family. Yet her Lady Romney persona emerged anyway, when she called it "ridiculous" that people say she and her husband don't have empathy for those who struggle. Again, it helps to show empathy, not merely tell voters you have it, and dismissing your critics as "ridiculous" didn't soften her edge. She also complained that her husband has been "demonized" by his opponents, but didn't comment on a GOP campaign that's depicted the president as a Muslim socialist with Kenyan anti-colonial values who "doesn't understand America," or even her own husband's brazenly false claim that Obama got rid of the work requirement for welfare to "shore up his base." Sorry, Ann, the world's tiniest violin is playing a sad song for you somewhere, but not at my house.

Other than that, Romney hit Gregory with a fog of vague claims that can't be confirmed. He cited "five different economic studies, including one at Harvard and Princeton and AEI and a couple at the Wall Street Journal," that showed he wouldn't have to raise taxes on the middle class to reduce taxes on the wealthy. But three are by conservative economists and the "couple at the Wall Street Journal" seem to be Op-Eds written on the Harvard and AEI studies. All of them, by the way, note that without knowing exactly which "tax loopholes" Romney would close, they can't really predict the effect of his budget. To his credit, Gregory asked Romney twice which loopholes he would close, but Romney dodged him both times, and Gregory failed to push again. (Over on ABC, Paul Ryan likewise ducked George Stephanopoulous on the same question.)

Romney also continued to claim that he'd help the middle class by reducing their capital gains tax rate to 0, but the Economic Policy Institute says the middle 60 percent of households earn only 3.9 percent of capital gains paid. So even if they paid nothing, as opposed to 15 percent, it wouldn't make much difference.

And when Gregory asked Romney if he ever spent time with people who are unemployed, the candidate stumbled awkwardly. "Well -- actually -- just -- last night it was. I was with -- a person who is facing some challenges. We spent some time together and shared our personal experiences in an effort on my part to -- point out that we can make it through tough times. Look, that's part of everyday life for most people. They have friends and you have acquaintances that have challenges and you talk about them."

But then he changed the subject entirely: "And -- and -- I -- I can tell you this, my life has been greatly enriched by my relationship with this young lady here. And I know how well I've got it because I was able to marry Ann." If only every unemployed person in America could marry Ann Romney, they'd be greatly enriched. That's about as realistic a plan for the unemployed as Romney's nonexistent jobs policy.