If the president gets re-elected, something about this hilarious and joyous viral photo will tell us why 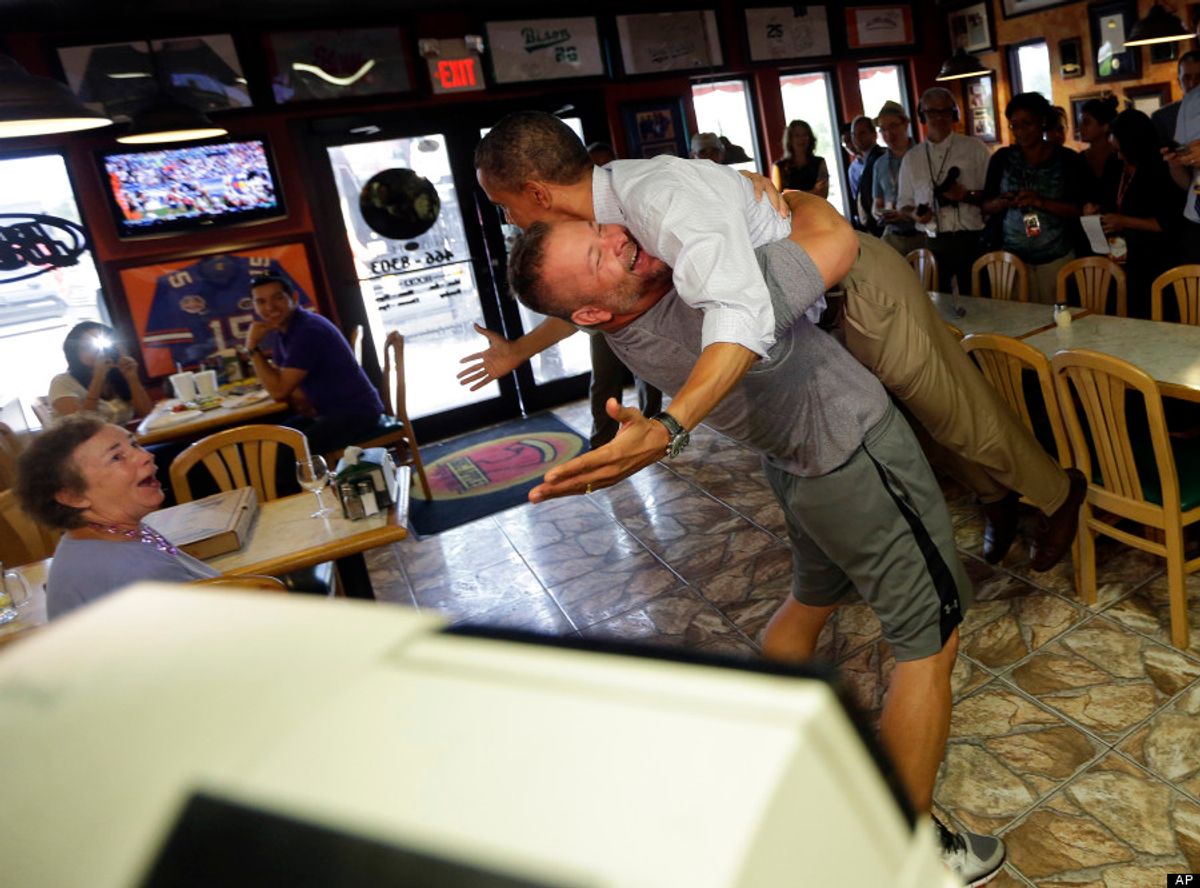 I saw it everywhere last night. I made it my Facebook cover photo. I couldn't stop smiling every time I saw it. I wanted to know the back story.

According to Helene Cooper, it's simple: Pizza parlor owner Scott Van Duzer regularly donates blood. He started the Van Duzer Foundation, to encourage others to do so as well. The Obama team decided to visit his restaurant, Big Apple Pizza and Pasta Italian Restaurant, in Fort Pierce, Fla. on Sunday, at least partly to hail Van Duzer's charity. A little while after the president walked into the restaurant, the powerful Van Duzer, who can bench press 350 pounds, lifted the skinny president high into the air.

“Man, are you a power lifter or what?” the president asked.

The iconic photo only shows the back of the president's head and his arms raised in supplication, so you're not entirely sure how he feels about it. The video shows that Obama was shocked but seemed to enjoy the ride Van Duzer gave him. The restaurant owner says he told a Secret Service agent his plans, and the agent said "I was alright as long as I didn’t take him away."

And so he didn't. The photo was everywhere on Twitter and Facebook Sunday night, and I struggled to figure out why – and why I had such a strong reaction to it. I literally felt for the very first time that the president would win re-election -- and of course that's irrational. But the sight of this swing-state Republican small business owner (who admittedly supports Obama) pulling the president into a gravity-defying bear hug seems to thwart the conventional wisdom that guys like Van Duzer don't like our first black president. It makes me feel optimistic about what I'm saying in my book: that a lot of people we've written off as hopelessly Republican don't like Mitt Romney and maybe against all odds find themselves fond of the president.

We'll probably find out on Monday that the Obama team did awesome advance work to identify Van Duzer, and I'm perfectly prepared for my reaction to be proven naïve. But I'm going to enjoy it anyway. Coming out of his convention with a bounce, watching Romney and Paul Ryan stonewall their way through the Sunday shows without a single human moment of connection, the president has to feel good about his chances as we move into the middle of September. It'll be a long six weeks, but this photo tells us something about why people say, despite the sluggish economy, they believe the president can relate to them better than Romney can. It will be a powerful advantage in the weeks to come.