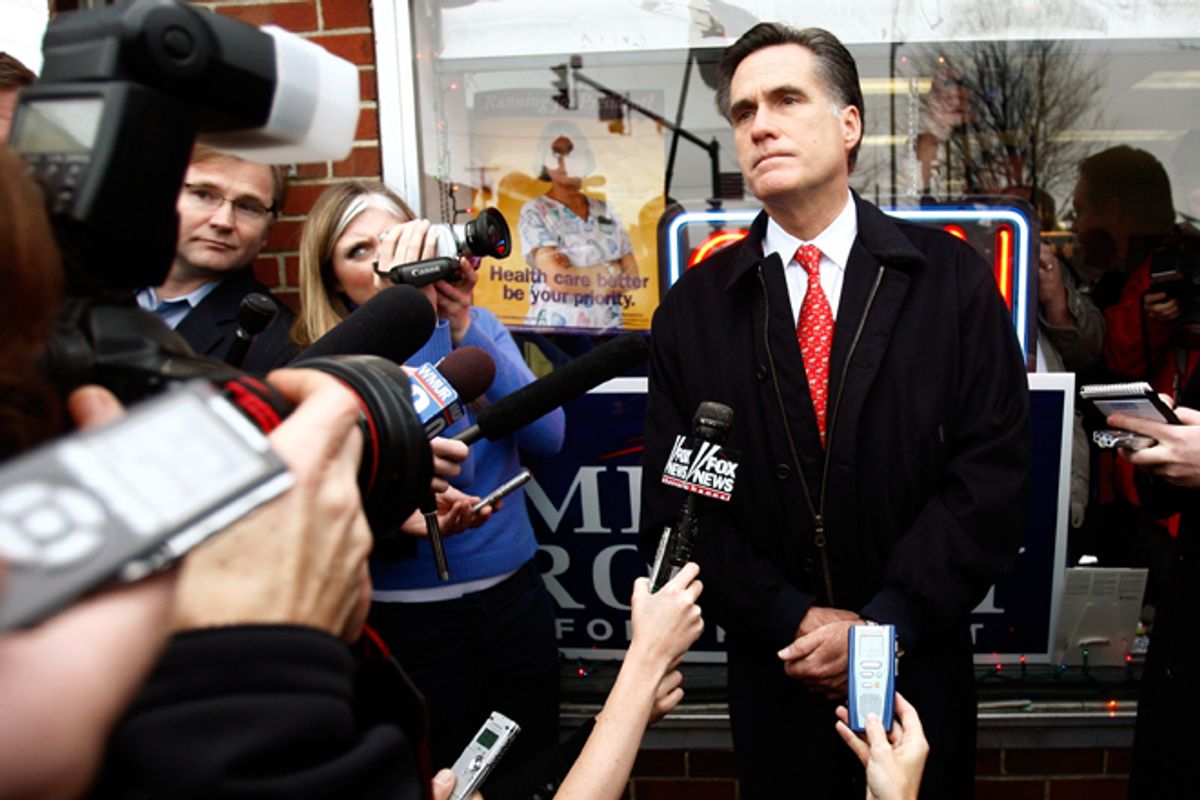 Here's where the presidential race stands: Barack Obama is doing pretty good and his convention went really well and it will likely take some major good luck and flawless debate performances for Romney to win in November.

Romney's campaign, you will no doubt be surprised to hear, disputes all of this. Romney pollster Neil Newhouse sent a memo out to the press (it's also been posted on Romney's campaign site) arguing that the Republican nominee has the president right where he wants him. Is this because of their "internals" or something else polling-related? Not really!

While some voters will feel a bit of a sugar-high from the conventions, the basic structure of the race has not changed significantly. The reality of the Obama economy will reassert itself as the ultimate downfall of the Obama Presidency, and Mitt Romney will win this race.

In his acceptance speech, President Obama did not offer any solutions for the millions of Americans unemployed or underemployed. But his convention speech was not the only big letdown to voters, as Americans also dealt with yet another dismal jobs report last week. President Obama is the only president in modern American history to stand before the American people asking for re-election with this many Americans struggling to find work. The key numbers in this election are the 43 straight months of 8% or higher unemployment, the 23 million Americans struggling to find work, and the 47 million Americans who are on food stamps.

So it's still the economy.

Here's the extent of the polling data that the memo actually mentions: "Wisconsin is now in play," one poll shows the race in New Mexico "closing," and the Obama campaign is "laying the groundwork for a stealth withdrawal" from North Carolina. Those are not really the three crucial states this year. (Also, New Mexico still seems out of reach for Mr. Romney, barring an unexpected landslide.)

The memo also mentions "Historical Data," by which they mean the 1980 election. "Political campaign historians will recall President Jimmy Carter led Ronald Reagan by a near double digit margin late in the fall in 1980," Newhouse writes, although that's not true. Reagan was polling ahead of Carter as early as the spring. The 1980 election remains a regular Romney campaign talking point, though, which is bizarre. I understand why the Republicans would like to pretend it's 1980, but a 1980 election repeat requires not just a depressed economy and an out-of-touch liberal incumbent, but also an inspiring and likable challenger and -- most important! -- a major foreign crisis. Reagan didn't just win on the strength of his debate performance. The Iranian hostage crisis basically sealed the deal. There's nothing remotely equivalent sinking Obama. (Unless his apology tour emboldens our enemies, I guess? Still time for that to happen!) Furthermore, as John Sides says, in 1980 the GOP convention gave Reagan a huge lead that Carter never overcame -- which, again, didn't happen this time.

An unnamed Romney adviser sent a more colorful dispatch to the National Review's Rich Lowry, who posted it under the mostly accurate headline "Horses**t."

“It’s horses**t. Nobody in Boston thinks we’re going to lose. We’re in a tight race. We had a 4-5 point bounce after our convention and it evaporated when they had theirs. Now they have a 4-5 bounce. It’s going evaporate in September. We feel good about the map. We’re up with advertising in Wisconsin and I think North Carolina is going to come off the board. On Ohio, they’ve been spinning for months now that it’s out of reach.

In case you weren't paying attention, it should be noted that the Romney campaign did not actually get a "4-5 point bounce" after their convention according to any pollster besides GOP-leaning Rasmussen.

This adviser goes on, naturally, to blame the liberal media. The liberal media is only reporting on tracking polls and state polls because they want Romney to lose!

Sometimes I think there’s a conscious effort between the media and Chicago to get Republicans depressed. And I hope our friends realize that all these media analysts out there are Democrats WHO WANT US TO LOSE. And the more Washington DC controls our economy, the more important inside-the-beltway publications are and the more money they make. The 202 area code is dominated by people who will make more money if Obama is reelected, so it’s not just an ideological thumb they’re putting on the scale for him, it’s a business interest.

Actually the specifically liberal media tends to do really well when Republicans are in power, business-wise. Outrage sells subscriptions and boosts fundraising, don't you know. (Also, yes, duh, Chicago wants Republicans depressed. But the press wants a tight race that anyone could win because that's more fun to report on and more compelling for the audience.)

Then comes the "actually it's Obama whose panicking" bit:

I actually think the other side is in a panic. You look at New Mexico closing up. And they’re not above 50 in any of their target states. Look, we’re raising money, they’re raising money, and it’s tight. This is a dogfight. But the numbers actually point to a romney win barring something unforeseen.”

When you mention "the numbers" you should actually specify which numbers you mean, because the numbers that I see don't look great for Romney. An "unforeseen" thing would be him suddenly beating Obama in Ohio and Michigan.

It's obviously the case that the press overreacts to poll shifts that turn out to be meaningless, and if Obama's convention bounce disappears entirely we're back to a tight race with a slim Obama lead -- but that means we're still at a slim Obama lead, which Romney's been unable to dent since the primaries ended. I recognize that a campaign has to spin that they're optimistic, even when they're losing. (Although as the Obama campaign knows, "oh shit we're losing!" is way better for fundraising.) But if I'm a Republican, I'm worried that team Romney actually believes a crappy economy and a money advantage will do their work for them, because of 1980.