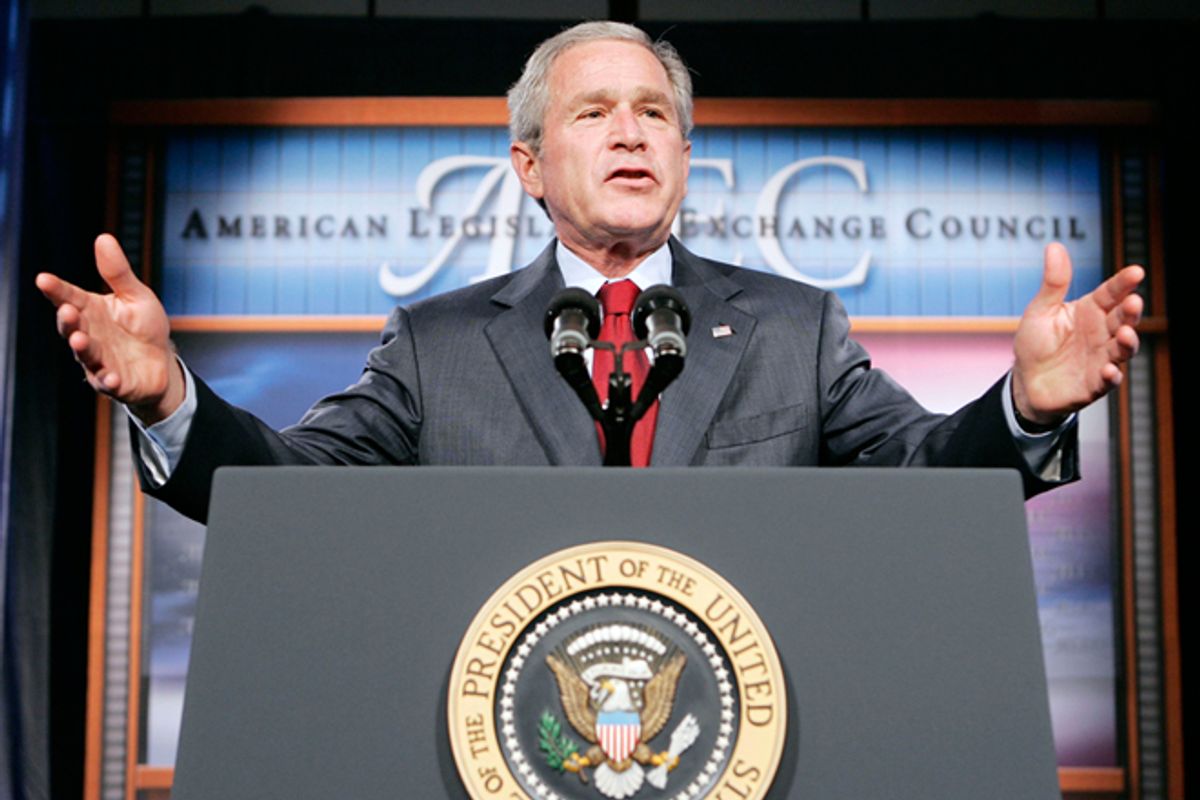 After a long flirtation, the GOP and ALEC are taking steps toward making their relationship official. ALEC, the American Legislative Exchange Council, is a controversial advocacy group that helps corporations and conservative interest groups write bills to be introduced in state legislatures across the country. ALEC “model legislation” includes rollbacks on environmental and labor regulation, voter ID laws and pro-gun laws, such as the “stand your ground” law that became infamous after the death of Trayvon Martin in Florida earlier this year. Recently, ALEC has come under increasing scrutiny, leading at least 38 major corporations to drop their sponsorship of the organization, including GE and Sprint, which pulled out just two weeks ago.

Despite this, the Republican Study Committee, a caucus of over 160 conservative lawmakers in the U.S. House of Representatives, which functions like the official in-house think tank for House Republicans, is taking steps to establish a "partnership" with the corporate front group, Roll Call’s Janie Lorber reports. The RSC has been working quietly with ALEC to host an event with federal and state lawmakers at the conservative Heritage Foundation on Friday. Paul Teller, the executive director of the RSC, was happy to embrace the ALEC. "Frankly, this gathering is long overdue ... As Washington encroaches more and more into state and local spheres, it's important that conservative legislators at the federal and state levels collaborate on policies to stop and roll back the ever-expanding federal government."

RSC Chairman Rep. Jim Jordan, a Republican from Ohio, is a member of ALEC, along with several dozen other Republican congressmen. ALEC has only a single Democratic member from the U.S. House, Rep. Dan Boren of Oklahoma. Jordan’s campaign paid dues of $100 to ALEC in 2001 and 2011, and possibly other years, according to documents published by ALEC Exposed, a  project of the Center for Media and Democracy.  A handful of GOP senators, including Marco Rubio and Jim DeMint, are also members, along with Democrat Joe Manchin of West Virginia. While many ALEC events serve as a forum for corporate representatives to meet with lawmakers, there will be no corporations represented at Friday’s event, which will feature at least six federal and 18 state lawmakers.

ALEC has also come under fire from good government groups, who argue that it is in clear violation of tax rules governing nonprofit organizations. Unlike 501(c)4 groups like Karl Rove’s American Crossroads, which already skirt the legal boundaries of political activity allowed for nonprofits, ALEC is a 501(c)3 charity. These groups, which include every major charity, are even more strictly limited in the political activity they can engage in. According to the IRS, “In general, no organization may qualify for section 501(c)(3) status if a substantial part of its activities is attempting to influence legislation (commonly known as lobbying).”

Critics argue that lobbying is the sole purpose of ALEC's work, as it hooks up corporations and lawmakers. Marcus Owens, the former head of the IRS' Exempt Organizations division, which handles nonprofits, has asked the agency to revoke ALEC’s tax-exempt status.

"To the extent that ALEC officials themselves are at this event, they are having lobbying contacts. ... It seems to me that it's probably a slam-dunk,” Joe Birkenstock, a lawyer who works with Owens told Roll Call.

But perhaps it is no surprise that the federal Republicans and ALEC have finally gotten a room, and that it's at the Heritage Foundation. Republicans and ALEC have long held similar beliefs and worked together on the state level. President Bush and other top Republican leaders have spoken to ALEC. The group, which used to be a nonpartisan corporate front group, happy to advance legislation to either party, as long as it served its corporate backers, has increasingly become the state-based arm of the Republican Party’s progressively more conservative legislative agenda.