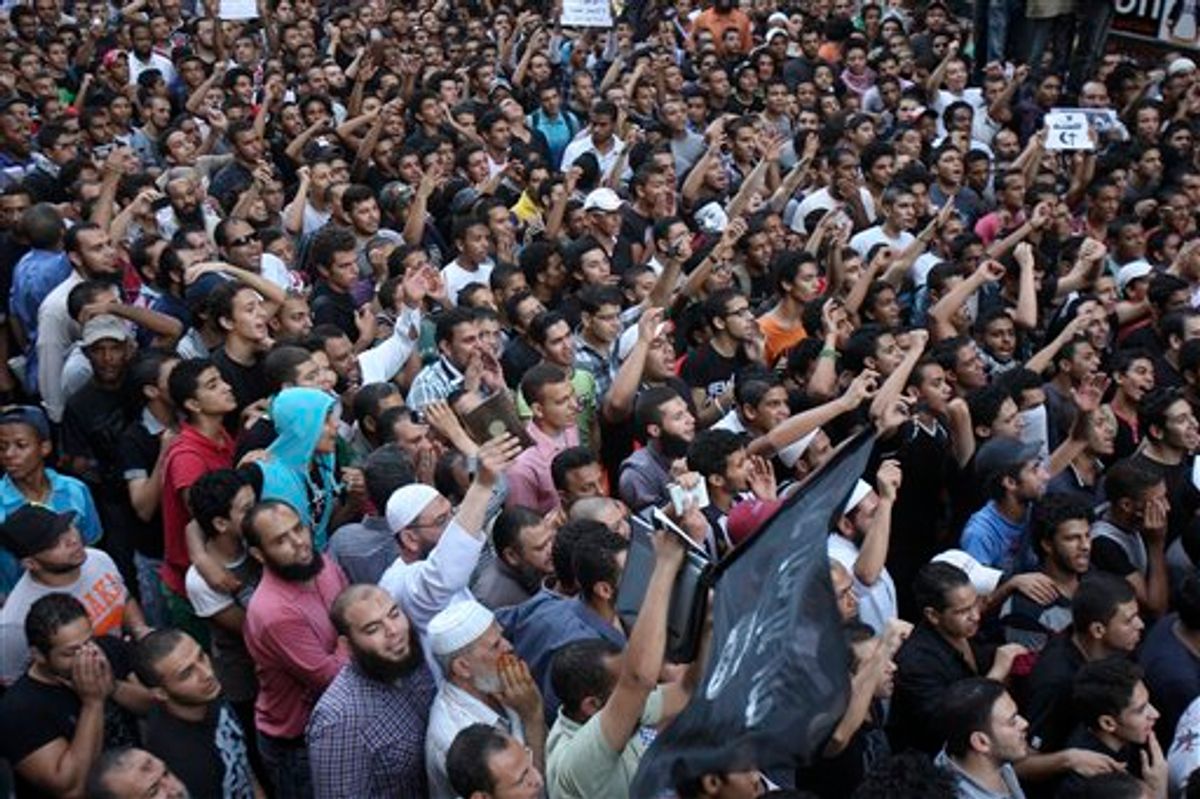 CNN is reporting that protestors have scaled the walls of the U.S. Embassy in Cairo replacing American flags with "black flags with Islamic emblems." Earlier today the Embassy issued an emergency message saying "Several different groups are calling for demonstrations in both downtown and Garden City this afternoon to protest a range of issues."

The incident prompted U.S. security guards to fire off a volley of warning shots as a large crowd gathered outside, apparently upset about the production of a Dutch film thought to insult the Prophet Mohammed, said CNN producer Mohammed Fahmy, who was on the scene.

An embassy operator told CNN that the facility had been cleared of diplomatic personnel earlier Tuesday, ahead of the apparent threat, while Egyptian riot police were called to help secure the embassy walls.

Tom Dale, a journalist in Cairo, is tweeting the scene here.

Twitter user @asmaahassan85 captures a view of the crowd gathering a few hours ago at the US Embassy in Cairo:

Dale has linked to the film in question without clarifying details (for non-Arabic speakers):

In place of the U.S. flag, the protesters tried to raise a black flag with the words "There is no God but Allah and Mohammad is his messenger", a Reuters reporter said.

Once the U.S. flag was hauled down, protesters tore it up, with some showing off small pieces to television cameras. Then others burned remains.

"This movie must be banned immediately and an apology should be made ... This is a disgrace," said 19-year-old, Ismail Mahmoud, a member of the so-called "ultras" soccer supporters who played a big role in the uprising that brought down Hosni Mubarak last year.

Many Muslims consider any depiction of the Prophet to be offensive.

Mahmoud called on President Mohamed Mursi, Egypt's first civilian president and an Islamist, to take action. Many others were supporters of Islamist groups.

About 20 people stood on top of the embassy wall in central Cairo, where about 2,000 protesters had gathered.

According to the BBC

The film which sparked the protest is said to have been produced by US pastor Terry Jones and co-produced by some Egyptian Copt expatriates.

Egyptian protesters condemned what they said was the humiliation of the Prophet of Islam under the pretext of freedom of speech.

The Atlantic has posted an English language version of the film and reports that the U.S. Embassy to Egypt and the Coptic Church have condemned it:

Terry Jones, you may recall, is the Floridian pastor who likes to draw attention to himself by burning Korans. Today, according to his Web site, he's saying he's going to be holding "The Trial and Execution of the Prophet Mohammad with Terry Jones." Inflamed by the media, Jones's wildly offensive statements have a proven ability to incite murderous violence.