My life in a turban

People called me "towelhead" and "Osama," but years of hate led to something I didn't expect: A career in cartoons 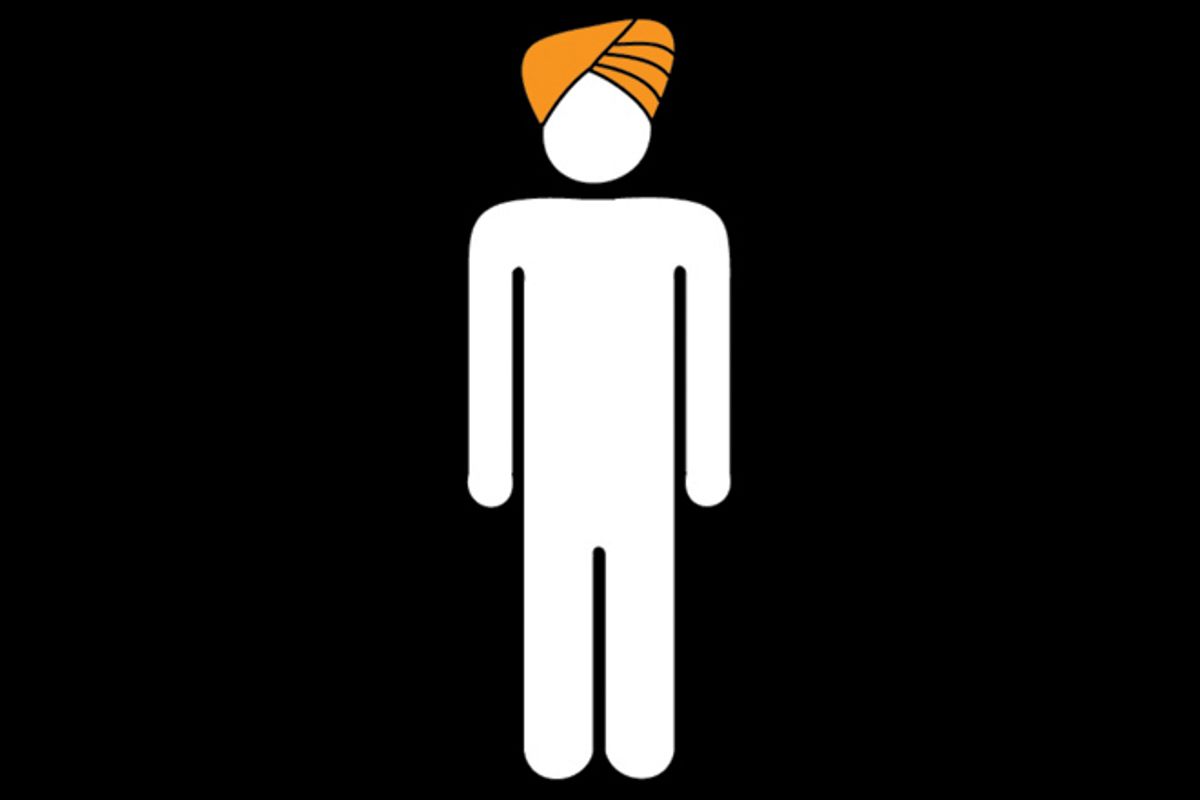 Hate appeared early in my life before I even knew it had a name. It poured in from the television screen, from strangers on the street who made jokes or compared me to cartoon characters, based on nothing but my turban, the sign of my Sikh faith. It wasn’t enough to rankle the normal rhythm of life, but it was a recognizable pattern. It rose into my conscience slowly, like a capillary action.

By the time I had put a name to this, I had already succumbed under its weight.

It began in New Delhi, India, where I moved from Washington, D.C., with my family in early adolescence. I grew up watching Bollywood movies, where Sikhs like me were always punch lines of the jokes. In 1984, Indian Prime Minister Indira Gandhi was shot dead by two Sikh bodyguards, and for the next few days the country erupted in mayhem. Sikhs were hunted down and burned alive. Anyone with a turban and beard was suspect. There were prying eyes on our apartment balcony and a mob seeking revenge on our blood. We survived the carnage, but up to 10,000 people  were reduced to ashes. Going out into the streets for the first time after that was the strangest of feelings. The eyes staring at me said, “We let you live, so be thankful.”

But shockingly, my people moved on. We Sikhs are a resourceful lot. Within weeks, schools and shops and spiritual centers owned by Sikhs were back in business. No commemorations would take place in the coming months or years. The newspapers called it a riot and the name has stuck. I left India and headed back to the United States for school, a place that I hoped might be more tolerant.

After high school, I tried to get a retail job in Los Angeles, but it was a long losing battle. From 7-11, Taco Bell, McDonald's to all local and national chains the answer was always, “Thank you for your application. We will call you back.” Out on the streets young and old would pass me by and burst into laughter. Clown and genie were the most common insults. Nine gestational months passed by without work.

When I arrived at Ohio State University, I became just one more in a sea of students. My bright blue turban still made me the center of attention, but I was more like an exotic specimen. It was a relief. But then the first Iraq war began. Now that our armed forces were engaged in battle with a Middle Eastern foe, my turban became a visual cue of global strife. Disregard the fact that Sikhs are from Punjab, an area uninvolved in the global conflict. Turbans reminded Americans of Iran, which had been the perpetrator of a hostage crisis led by a turbaned cleric named Khomeini. Disregard the fact that Iran and Iraq were arch-enemies. Or that one was Arab, another Persian. It was all semantics for most Americans. The turban not worn by any of the Iraqi forces was to be battled on the streets of America. I got my call to arms shortly, when a few fellow Americans beckoned me, “Go back home.”

I did leave the barren landscape of the Midwest for the sunny beaches of Santa Barbara. I resumed studies at the University of California campus sitting atop the cliffs facing the Pacific Ocean. The war was over and the wonderfully more diverse student body accepted me with open arms. But in one of the many ironies of life, now that I was in a place that did not resist my presence, I began to feel the dis-ease of my own existence. I did not want to stand out anymore. Years of ridicule, taunts and hatred had taken their toll.

The long unshorn hair I had not cut for the first 20 years of my life – the hair that was an article of the Sikh faith -- lost its roots. The turban turned into an artifact devoid of meaning. It came off in my dormitory room and the barber push-broomed away the long wavy strands from the floor into the trash bin.

For the next decade people no longer stared at me. I was lost in the safety of the crowds, an ethnic minority but not a “dangerous” one. In those years, I moved away from my religion and tried to find my professional passion. I focused on epidemiology and biostatistics at the University of California, Berkeley, and dabbled in Taoism and Buddhism.

But the Sikh faith continued to call to me. Living with my brother as a graduate student I was forced to listen to 24 hours of hymns from the Sikh scriptures playing on the stereo. I wanted to rebel against this unrelenting marathon, but I could not resist its force. By the time I concluded my master's program, I had fallen in love. Not with a woman but with kirtan, poetic verses sung in adoration of the divine.

Work took me to the East Coast not far from New York City, where I embraced my Sikh faith for the first time. No more visits to the barber. The hair grew by the months, and by August 2001, I had my waist-length hair back. I tied it in a bun on top of my head, which served as an anchor for the 5-foot-long blue turban. I was a little rusty at first, but it was just like riding a bike.

And then, Sept. 11 happened. The biggest attack on American soil since Pearl Harbor would change life forever. I worked from home for the next two weeks. A self-imposed exile from the war on head coverings that commenced within hours of the attack.

A real-life video game of targeting men with turbans and beards spread across the nation. Like every other Sikh man, my goal was to live my life without falling victim to ignorance. But that was a near impossible task. As flags went up on homes, cars and businesses in patriotic fervor, so did fingers raised in a new and hostile greeting toward me. Never before had so many strangers been compelled to call me names: Osama, Taliban, Raghead, Towelhead.

The rage in the faces of my fellow Americans at the mere sight of me was palpable. Their bloodshot, tear-streaked eyes communicated pain. I shared the source of their pain but also became the unwitting recipient of their anger.

Hate was once again a companion of mine. I had to learn to live with it again. The first victim of a hate crime after the attacks was a Sikh in Arizona, and I was struck by an animated cartoon that appeared online with the title “Find the Terrorist.” The sequence featured a Sikh man, an Italian, a Muslim, a Latino and a white man. You had to click on the rotating images to shoot and kill.

I saw in the artist a willingness to fight against this wave of hate. Mark Fiore, the 2010 Pulitzer Prize-winner for editorial cartoons, captured the truth as it was playing out on the streets of America. He exhibited a rare courage in publicly labeling the crimes being committed against Muslims and anyone else perceived as a “Muslim”: These were acts of terrorism.

He captured the predicament of turbaned and bearded Americans like myself. He penned the turbaned Sikh flawlessly into an animated illustration. That emotional moment provided a creative spark for me to start envisioning Sikhs in the world of editorial cartoons. I finally discovered the best way to respond to a lifetime of being a target of hate, living with it and even accepting it as part of life.

I raised my right index finger. I moved it across the tiny computer touch pad and began to capture the world of Sikhs here at home and around the globe. These were not pedantic introductions to our faith but vivid, complicated portraits often inspired by the wrongs I had witnessed throughout my life: The people who got away with killing Sikhs in India, the way Bollywood feeds on debasing Sikhs at the butt of their jokes, right-wing fascists in India and America who spread their own distorted flavors of violence. But I also dissected our own religion and its contradictions. How our fundamental ethos is equality but many of the Gurudwaras where we worship are based on petty differences. How women's emancipation by the founders of the faith has been reduced to a mere slogan. How Sikhs are blessed with some of the worst leadership on the planet. The list of our shortcomings goes on and on. But our successes also abound. Sikhs have survived multiple holocausts, and served alongside allies in WWI and II. With over a hundred-year history in America, Sikhs have tilled farming lands, founded companies, driven cabs, healed patients, served meals, created technologies.

It has been 11 years since the 9/11 attacks. All eyes are still on Sikh men in turbans and beards. Hate crimes are on the rise. Sikh Americans have been punched and shot at across the nation. The tragedy at the Sikh Temple that happened last summer in Wisconsin is not a surprise to me. Sikhs will continue to be a lightning rod for American fears and anxieties. Our turbans cannot be missed.

But I can say without hesitation I feel more freedom to practice my faith in America today. While we struggle to learn from our past and build on a better future, editorial cartoonists will have their hands busy, and I continue to learn from roads built by masters like Jules Feiffer, Ed Sorel, Paul Conrad, Ann Telnaes, Mark Fiore and a legion of editorial cartoonists. These are a continuum of men and women who have used their keen acumen to dissect the cracks in our social, political, economic, religious universe.

Following in their giant footsteps, I take for granted the freedom of speech protected by the First Amendment of our Constitution. Threats have come my way, but I know there are not too many places on this planet I can sketch to my heart’s desire without fear of persecution, where a man like me might get the opportunity to project my ideas into the collective consciousness through a magical dance of lines and curves.