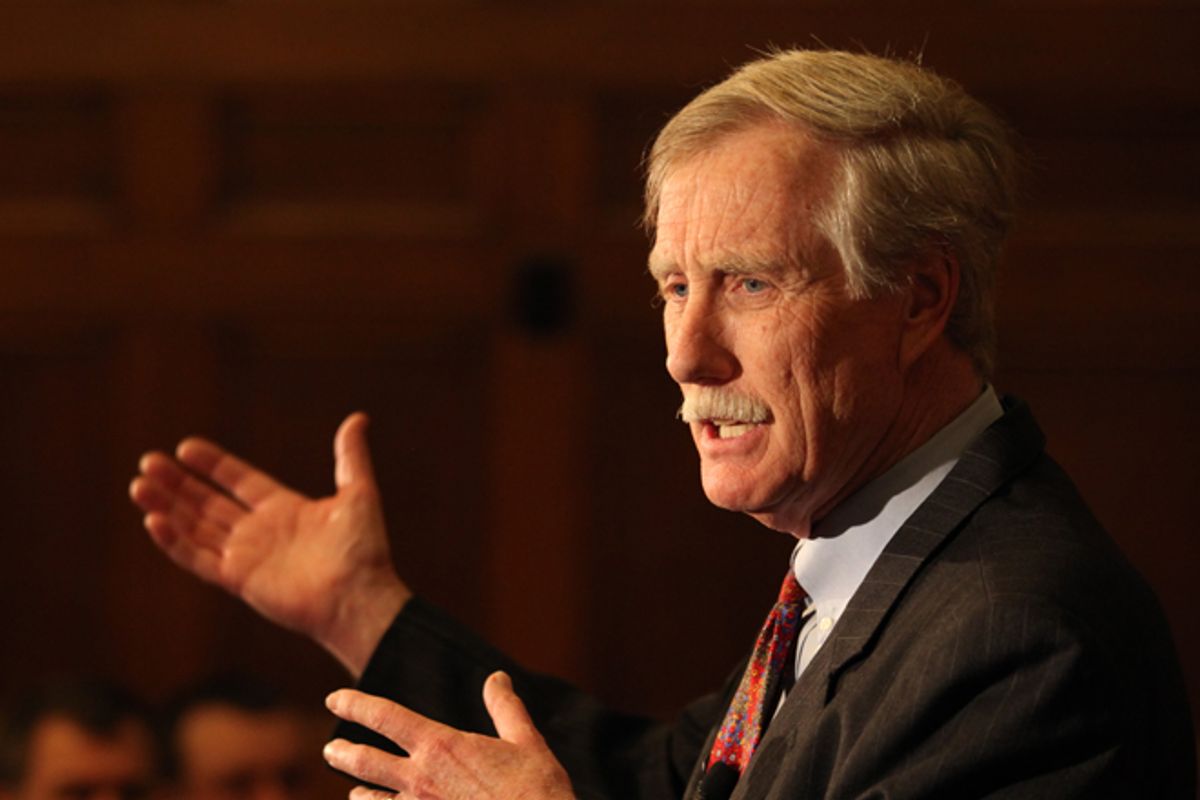 One of the oldest dirty tricks in politics is running candidates in your opponent's primary to distract them from the general or even potentially knock them out entirely. The FBI is reportedly investigating Rep. David Rivera for backing a fake Democrat with envelopes stuffed with cash, and Republicans in Wisconsin openly supported “fake Democrats” there in order to give Gov. Scott Walker an edge in the election's timing.

But the rise of super PACs has opened up a new venue for this tactic, allowing operatives to anonymously deploy hundreds of thousands of dollars of ads while deceitfully pretending to be partisans of the other side. In Maine, where liberal-leaning independent former Gov. Angus King is the clear front-runner for an open U.S. Senate seat, a Republican-tied group with the innocuous name Maine Freedom has spent $250,000. But instead of promoting Republican Charlie Summers or using all the money to attack King, the group is boosting Democrat Cynthia Dill. The ads portray Dill positively, calling her “a Democrat you can feel good about.”

The idea, presumably, is that by increasing Dill’s currently meager share of the votes, they can siphon enough votes away from King to hand Summers the election. And there’s real precedent in Maine for this. Three years ago, the gubernatorial race looked a lot like today’s Senate race, with popular independent Eliot Cutler on a path to victory. Many observers in the state, including progressives, blame the Democrat for spoiling that election for Cutler and allowing Republican Paul LePage to win.

The Kennebec Journal reports that the treasurer of Maine Freedom, Michael Adams, works as an outside general counsel to the Republican Governors Association and used to serve as the RGA’s in-house counsel, but he denied that the RGA was involved in the Maine ads. In the typical language of these groups, Maine Freedom calls itself "a bipartisan coalition of people who live in Maine or love Maine or both, and who are focused on getting the facts out about the candidates for U.S. Senate."

Meanwhile, on the other end of Route 1, in Florida, another faux liberal group is doing a similar thing. A group simply called Progressives is sending paid mail pieces attacking Democratic state Senate candidates -- from the left. The mailers attack one for voting for a bill backed by the NRA, another accuses a Democrat of “looking out for the right-wing agenda,” while a third hits a Democratic candidate for donating to George W. Bush’s presidential campaign in 2000. But the interesting thing about Progressives is that it's not progressive at all. In fact, as the Orlando Sentinel reports, the group lists the same mailing address as a law firm and lobbying shop run by Richard Coates, who happens to be the general counsel for the Republican Party of Florida. “You mail a piece to Democrats and you put a return address with a Democratic-sounding name. It’s misleading at best and fraudulent at worst,” said state Sen. Maria Sachs, one of the targeted Democrats.

Indeed, while intervening in the opposition party’s internal politics to influence things in your favor is nothing new, what is new is that these groups can get away with spending massive amounts of money without having to disclose where it came from or why it’s being spent. Sen. Claire McCaskill is credited with helping Rep. Todd Akin win his Republican Senate primary, but she ran ads attacking Akin from the right in a way that she figured (correctly) would help him and with a disclaimer that they came from her campaign.

Meanwhile, the super PAC in sheep’s clothing approach in Maine has the benefit of damaging both the candidate being attacked and the candidate it supposedly helps. Even though super PACs are legally prohibited from coordinating with campaigns, the perception that Dill is benefiting from Republican secret money has nonetheless offended some liberals in the state. She has been quick to distance herself from the ads, calling them “cynical,” but the negative reception may remain.