The definitive list of the V.P. candidate's untruths, beginning with his epically error-filled RNC speech 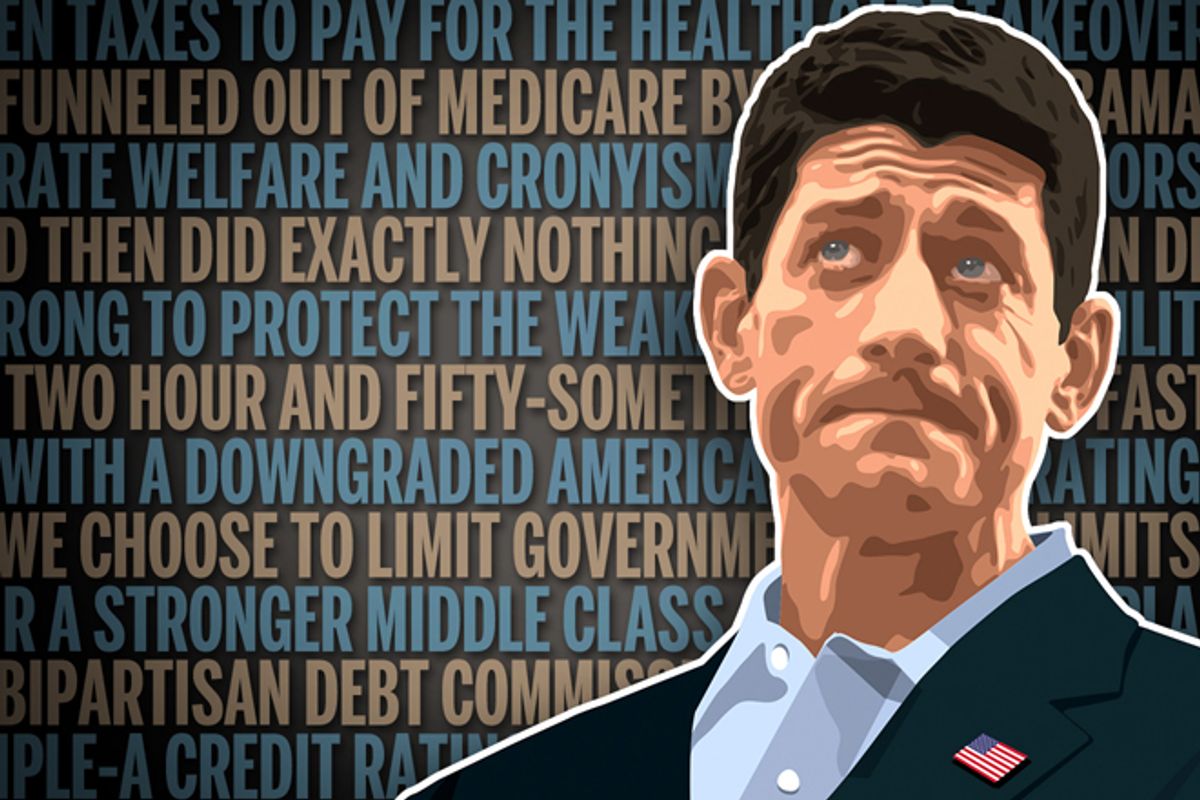 Mitt Romney pollster Neil Newhouse recently said that the Romney campaign is “not going to let our campaign be dictated by fact checkers.” If the past few weeks are any indication, Paul Ryan is sticking pretty close to that strategy. Here are his most recent lies, going back to his universally fact-checked Republican National Convention speech. Come back: We’ll update throughout the rest of the campaign.

10. "I voted for the Budget Control Act. But the Obama Administration proposed $478 billion in defense cuts. We don’t agree with that, our budget rejected that, and then on top of that is another $500 billion in defense cuts in the sequester." Truth: Ryan has been doing back flips to explain why he has been criticizing the Democrats for the $600 million "sequestration" cuts that will automatically go into effect if there's no budget compromise by December. Ryan, in fact, voted for those cuts. The sequestration cuts, along with $487 million in other defense cuts, were both a part of the Budget Control Act.  (September 9, 2012)

9. "And by the way, under President Clinton, we got welfare reform ... which moved people from welfare to work, to get people out of poverty. President Obama is rolling back welfare reform." Truth: President Obama granted several Republican governors new flexibility for how to implement welfare standards, but did not eliminate the current existing requirements. The claim about the work requirement was universally debunked by fact checkers, and by Bill Clinton. (September 5, 2012)

8. “Under three, high twos. I had a two hour and fifty-something ... I was fast when I was younger, yeah.” Truth: Runner's World fact-checked Ryan's claims that he had run a marathon in under three hours, and found that he is recorded to have finished in just over four hours. Ryan later backtracked. (August 31, 2012)

7. "When he talked about change, many people liked the sound of it, especially in Janesville, where we were about to lose a major factory. A lot of guys I went to high school with worked at that GM plant. Right there at that plant, candidate Obama said: 'I believe that if our government is there to support you, this plant will be here for another hundred years.' That's what he said in 2008. Well, as it turned out, that plant didn't last another year. It is locked up and empty to this day." Truth: Ryan blamed Obama for the plant's closure, but in reality the plant had closed before Obama was even sworn into office, during the Bush era. (August 29, 2012)

6. "The stimulus was a case of political patronage, corporate welfare, and cronyism at their worst. You, the working men and women of this country, were cut out of the deal.”  Truth: The non-partisan CBO estimates that the stimulus helped create 3.3 million jobs, and most economists agree it was at least somewhat successful. Ryan himself requested stimulus money for his district in 2009-2010, then got caught lying about it. (August 29, 2012)

5. "Seven hundred and sixteen billion dollars, funneled out of Medicare by President Obama. An obligation we have to our parents and grandparents is being sacrificed, all to pay for a new entitlement we didn’t even ask for. The greatest threat to Medicare is Obamacare, and we’re going to stop it.” Truth: The savings in Medicare come from cuts to reimbursements to hospitals and insurance companies, not from seniors, and go to paying for the healthcare law. By repealing the ACA and restoring those reimbursements, Romney and Ryan would in fact hasten Medicare's demise. (August 29, 2012)

4. “You see, even with all the hidden taxes to pay for the health care takeover …” Truth: In 2010, Politifact deemed the "government takeover of health care" meme its "Lie of the Year," writing that  "the law Congress passed, parts of which have already gone into effect, relies largely on the free market." (August 29, 2012)

3. “He created a bipartisan debt commission. They came back with an urgent report. He thanked them, sent them on their way, and then did exactly nothing.”  Truth: Ryan, who served on the commission, voted against its recommendations. So did the other House Republicans. (August 29, 2012)

2. Obama “began with a perfect Triple-A credit rating for the United States; it ends with a downgraded America.” Truth: The credit downgrade in 2011 was the result of House Republicans' refusal to raise the debt ceiling. Standard & Poors cited the use of the debt ceiling and the threat of default as "political bargaining chips" when explaining why it downgraded America's credit rating. S&P noted that the Republicans' refusal to find ways to raise new revenues impacted the decision as well. (August 29, 2012)

1. “We have responsibilities, one to another — we do not each face the world alone. And the greatest of all responsibilities, is that of the strong to protect the weak.” Truth: About two-thirds of the spending cuts in Ryan's budget plan come from programs that benefit poor people, while at the same time it cuts taxes for the wealthiest Americans.  (August 29, 2012)