Libyans are overwhelmingly pro-American. So how did Tuesday's attack occur? 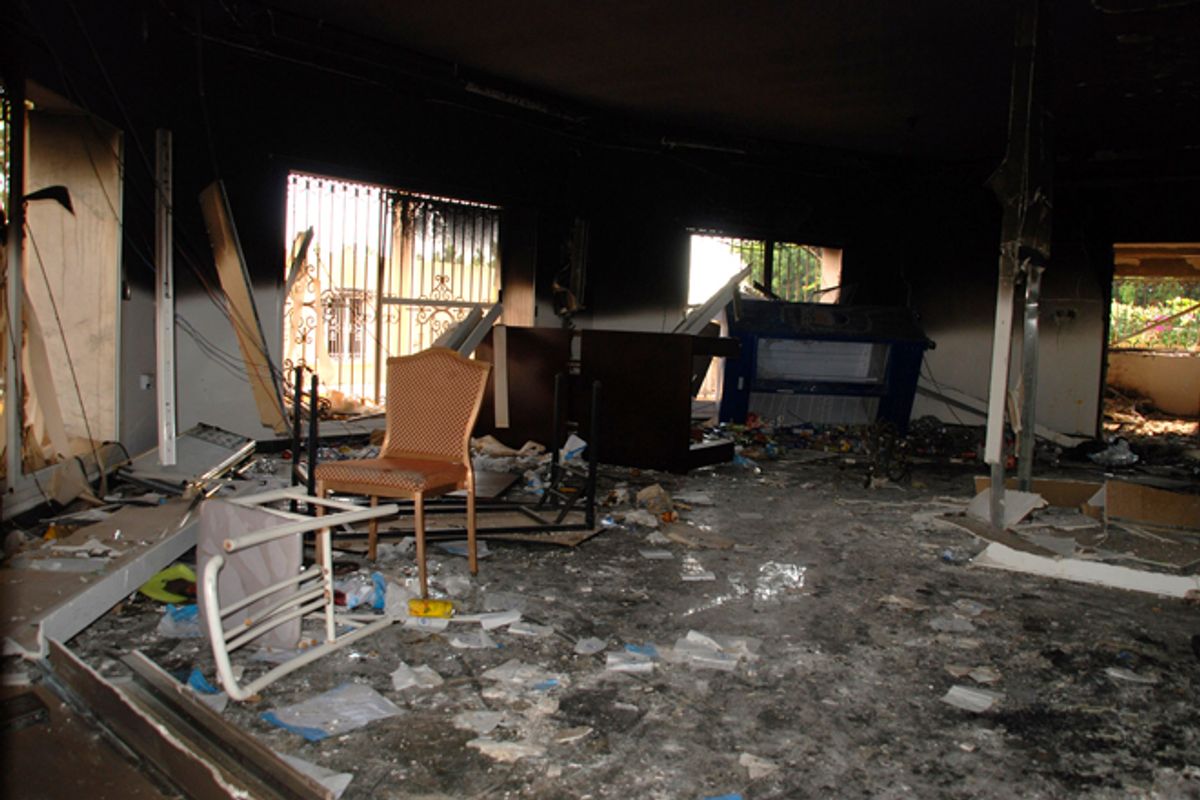 Glass, debris and overturned furniture are strewn inside a room in the gutted U.S. consulate in Benghazi, Libya. (AP/Ibrahim Alaguri)
--

After leading a massive international air campaign to rescue the Libyan revolution from Moammar Gadhafi, Americans were understandably shocked and appalled to wake up to news that extremist militants had stormed the U.S. embassy in Benghazi and murdered Ambassador Chris Stevens as well as three embassy support staff. Contrary to what this incident seems to suggest, Libyans are not anti-American, and indeed are one of the most staunchly pro-American constituencies in the Middle East and North Africa. Recent Gallup polls show that strong majorities of Libyans view America and American leadership in a positive light and want to enter a new era of closer, more cooperative relations with the West. Indeed, a poll of the Eastern Libyan region of which Benghazi is the major metropolitan center shows U.S. favorability at 90 percent. The new, democratically elected and thus representative government of Libya was unequivocal in its condemnation of the violence against the U.S. embassy. Deputy Prime Minister Mustafa Bushagar called it “an attack on America, Libya and free people everywhere." He specifically referred to the murdered ambassador as “a friend of Libya” and denounced the killers as barbaric.

So in what context, then, could such a heinous act have occurred? If Libyans are as pro-American as they and their leadership suggest, how could such a shocking attack have been committed by a group of their fellow citizens? While the 2011 war succeeded in toppling the dictatorship of Gadhafi, it has led to a power vacuum within the country that has resulted in many places in a situation of lawlessness and social chaos. Religious extremists, armed militias and opportunistic criminals have been given free rein in some parts of the country. The result has been scenes of horrific violence that have targeted both Libyans and Westerners.

In the last few weeks alone, Salafi extremist militants of the type blamed for the embassy attack have inflicted grotesque violence against the Libyan people, even driving bulldozers into the capital city of Tripoli and destroying centuries-old mosques and shrines. Militias within the country have been described by Amnesty International as being “out of control,” wantonly inflicting human rights abuses and engaging in acts of banditry against the general population. The assault against the U.S. embassy was not the first act of aggression by religious extremists toward Western symbols in the country; a few months prior video surfaced of men smashing graves belonging to war dead from Britain and Australia, an act that produced widespread revulsion both within Libya and abroad. Through the breakdown of the rule of law, the fall of Gadhafi’s tyranny has had the perverse effect of empowering many of the least desirable elements within Libyan society, the biggest victims being ordinary Libyans themselves, who have fallen prey to both extremists and common criminals.

While ending the brutal dictatorship of Gadhafi and rescuing the Libyan revolution was a positive and noble act, the lack of understanding and attention paid to the inevitable blowback from such an intervention has resulted in a situation that victimizes both Libyans and Americans. Like Afghanistan and many other countries before it, where Western powers intervened to defeat a common foe, the aftermath has been left more or less to the people on the ground. As Ian Martin, the U.N.'s envoy to Libya, has said: "The former regime may have been toppled, but the harsh reality is that the Libyan people continue to have to live with its deep-rooted legacy; weak, at times absent, state institutions, coupled with the long absence of political parties and civil society organisations, which render the country's transition more difficult."

War to remove an established government is a recipe for anarchy, and that is what is playing out in Libyan streets today. In such circumstances, it is impossible to determine which faction ends up wielding power, and in the past, it has most often been those who are best armed and most ruthless. It is in just such an environment that religious fanatics whose views are perceived unfavorably by the overwhelming majority of Libyans suddenly find themselves empowered. As such, the popular but weak central government, which has been legitimized at the ballot box by the Libyan people, finds itself cowed in fear by armed and lawless groups.

Simply bombing Libya and declaring it a victory for the American and Libyan people may be politically expedient in the short term but results in real blowback. The nobility and good intentions involved in the military removal of Gadhafi’s regime will be undercut if a new state of Libya does not evolve the democratic and civil society institutions that limit violent extremists and allow the popularly elected government to exert its will. It is incumbent upon those pundits and politicians who argued that intervening in Libya was in American interests to see their project through to completion; while it may be emotionally satisfying in the immediate term, there is no real or durable victory in leaving a country in ruins and walking away.

The murders at the U.S. embassy are a manifestation of the terror that ordinary Libyans have been subject to since their society collapsed. It is in our interest and theirs that the country not fall into the hands of violent religious extremists who today make up only a small fraction of the population yet possess both the weaponry and willpower to override the will of the citizenry’s elected government. Recent history in Afghanistan and elsewhere shows that such an outcome would have deeply negative consequences in the long term, and the “victory” achieved by NATO in Libya may end up being viewed as just another of many disastrous foreign interventions that created far more harm than good.