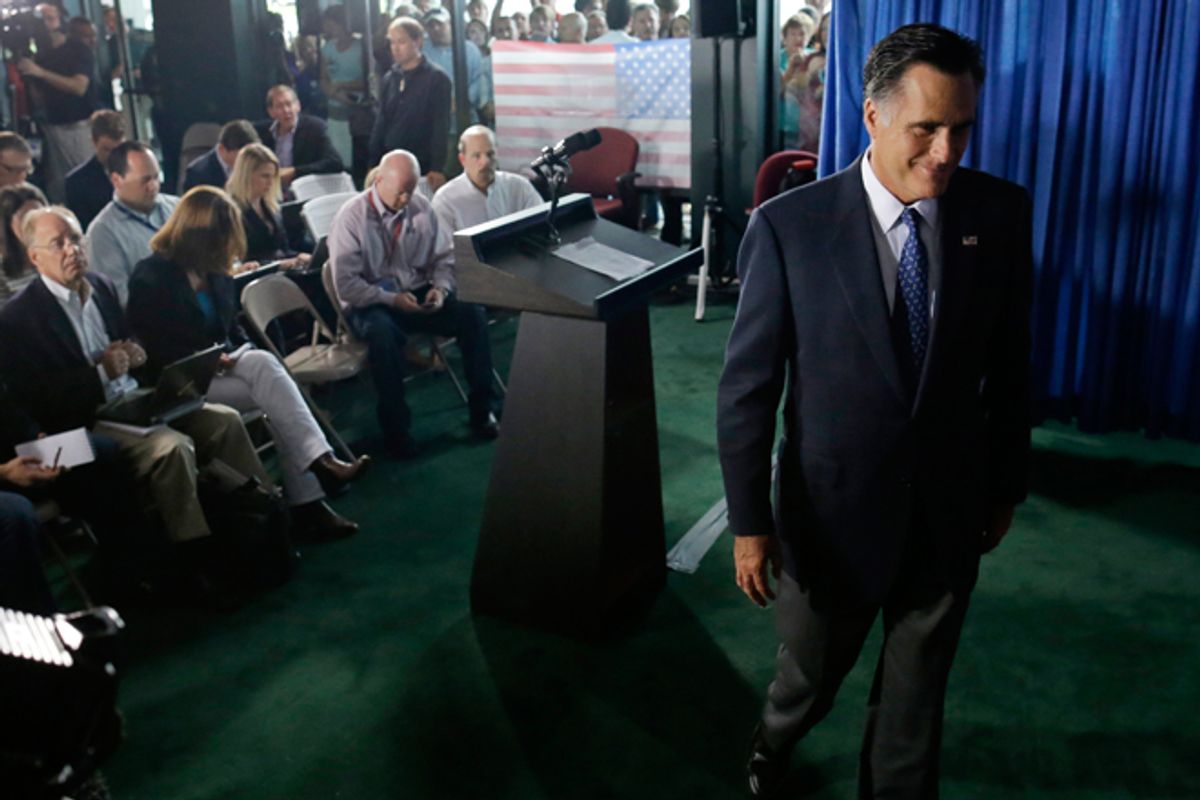 Don’t look to Republican leaders to defend Mitt Romney’s attack on President Obama over protests in the Middle East, even as the candidate repeated his attack this morning. At a hastily arranged press conference, Romney stood by the statement his campaign issued last night, which has come under criticism from liberal pundits and mainstream journalists alike. The generally agnostic political team at NBC news led by Chuck Todd called it “one of the most over-the-top and (it turns out) incorrect attacks of the general-election campaign.”

“I also believe the administration was wrong to put out a statement sympathizing with those who had breached our embassy in Egypt, instead of condemning their actions," Romney said this morning. "It’s never too early for the United States government to condemn attacks on Americans." Actually, there is one time when it’s too early -- when the attacks have not yet occurred. Romney today repeated three times that the embassy issued the statement “after their grounds had been breached,” but that’s simply not true. The statement came before protesters had breached the embassy walls, so there was no attack to be condemned. Even Erick Erickson acknowledged as much. As Marc Ambinder noted, the statement was an attempt by those trapped inside the embassy to save their own lives by calming the protests, a point apparently lost on Romney.

Romney also refused to accept the Obama administration’s disavowal of the statement. Officials later said the statement was issued by embassy staff, and not approved by Washington, but Romney had none of it: “The embassy is the administration.”

The timing of Romney's attacks is a bit ironic, considering that just the day before the campaign’s foreign policy adviser told BuzzFeed that foreign policy was a “distraction” and “shiny object” Obama was trying to use to distract from his economic record.

But, so far, at least, Republican heavyweights are not ready to get Romney’s back here. Sen. John McCain, the GOP’s biggest voice on foreign policy and the 2008 presidential nominee, issued a joint statement with fellow hawks Sens. Lindsey Graham and Joe Lieberman that made zero mention of Obama. “We have confidence that our own government will provide all necessary assistance,” the senators said before voicing strong support for the Arab Spring. “To follow this misguided path [that the Arab Spring is doomed] would not only be a victory for the extremists and their associates, but a betrayal of everything for which Chris Stevens and his colleagues stood,” they said, referring to the slain U.S. ambassador. (McCain also praised Secretary of State Hillary Clinton for striking "just the right message and tone.")

Meanwhile, House Speaker John Boehner also issued a short statement that conspicuously failed to mention President Obama. The same was true for the House’s No. 2 Republican, Rep. Eric Cantor, along with Sen. Marco Rubio, who has been a close ally of Romney’s.

Instead, Romney got the backing of Sarah Palin, who took the opportunity to make a penis joke: "If he doesn’t have a 'big stick' to carry, maybe it’s time for him to grow one."  In his corner, Romney also had the esteemed RNC Chairman Reince Priebus, who tweeted a not so faint dog whistle suggesting that Obama sympathizes with Muslim extremists, and Newt Gingrich, who turned 180 on the Libya intervention once Obama supported it.