Can you change her choice?

A remarkable fact about strict new abortion laws, like forced ultrasounds, is how rarely they change women's minds 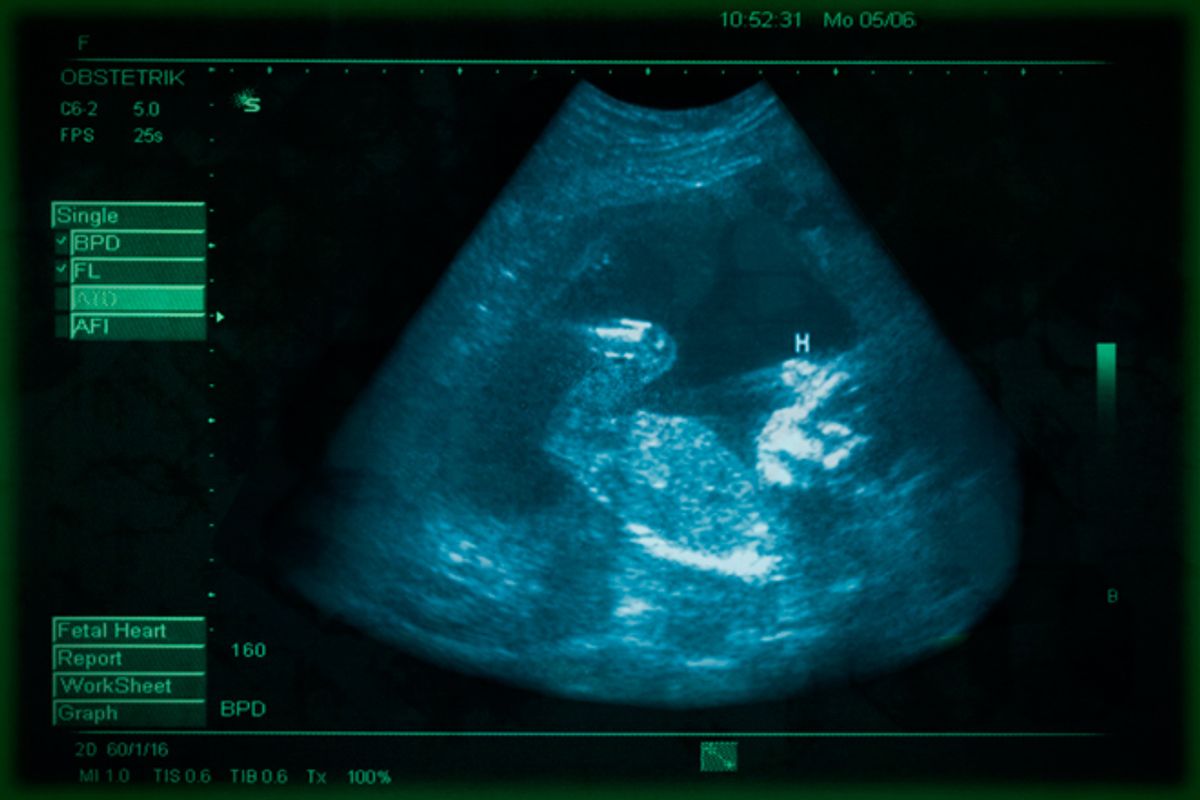 Last week, a passage in Caroline Kennedy's speech at the Democratic National Convention had Bill O'Reilly fuming. "As a Catholic woman I take reproductive health seriously and today it is under attack," she said. "This year alone, more than a dozen states have passed more than 40 restrictions on women's access to reproductive healthcare. That's not the kind of future I want for my daughters or your daughters." O'Reilly was outraged by the invocation of Catholicism, but his guest, Karl Rove, had another complaint.

"Remember, this year, no one is seriously talking about ending abortion," Rove said on "The O'Reilly Factor." (Like Mitt Romney's claim that abortion is a "settled" issue for the courts, that will come as unwelcome news to the antiabortion faithful in the Republican coalition.) Later in the show, Megyn Kelly explained, accurately, that abortion opponents, short of getting an outright ban, have decided to opt for "more limitations on abortion." She added, less accurately, "So, for example, requiring women who want to undergo an abortion to submit to an ultrasound where they are shown the beating heart of the baby. I mean, you know, which is a deterrent, obviously, to abortion."

What was striking about this fairly typical discussion on "The O'Reilly Factor" -- and indeed, in Kennedy's passing invocation of those laws -- is how seldom you hear about the actual, real-life impact of these laws, which range from ultrasound requirements and waiting periods to funding bans and spurious regulations openly intended to shut abortion clinics down. Enabled by Planned Parenthood v. Casey, right-to-lifers have pushed such laws through as part of an incremental strategy to eventually end legal abortion in the United States. Pro-choice organizations and activists oppose such laws as a matter of principle, on the understanding that they're chipping away the abortion right. But do such laws work as they're intended: dissuading women from having abortions? Or, as Kelly put it, is "requiring women who want to undergo an abortion to submit to an ultrasound" actually a "deterrent, obviously, to abortion"?

While the data is often piecemeal -- the most recent national figures are from 2008, before some of the most extreme measures were enacted; each state varies in its laws and its record-keeping; women may travel to other states; and some outside factors are hard to control for -- the general picture appears to be that some of these restrictions work, but not nearly as well as abortion opponents wish they would.

Theodore Joyce, a professor of economics and finance at Baruch College who has authored several peer-reviewed studies of the impact of abortion laws, has developed a working theory about such restrictions. His research shows that they rarely succeed if the goal is changing women's minds about having an abortion, what he calls "the demand side," but the aim of ending abortion is better served when "the supply side" is attacked -- for example, by shutting down clinics.

"Women are not persuaded by informational assaults or this persuasive messaging," he says, even when it includes a required ultrasound or misleading counseling of medically inaccurate information (that abortion causes breast cancer or leads to suicide). The premise, after all, of a forced ultrasound (and in some states, viewing and listening to that ultrasound) is that a woman will be surprised by what she finds out, despite the fact that 61 percent of women who have abortions already have one or more children. But you can't get an abortion if you can't get to a provider, a fact that has been eagerly exploited in states like Mississippi, Kansas and Alabama, which have rushed to pass restrictions intended to shut the doors of clinics regardless of medical standards.

As an example of the supply and demand conundrum, Joyce points to the mixed results of the 2004 Texas Woman's Right to Know Act. "The mandatory information session and 24-hour waiting period appear to have had no effect on abortion rates," Joyce and his colleagues concluded in a study published in the Journal of Policy Analysis and Management in 2011. But a provision of the law that required abortions after 16 weeks to be performed in an ambulatory surgical center -- an onerous requirement that the state's clinics, at first, were unable to meet -- was more effective. In the first year after the law was enacted, abortions after 16 weeks fell 69 percent, even as four times as many Texas women went out of state for such abortions. They estimated that 6,631 abortions would have happened if the law hadn't been passed.

To abortion opponents, of course, that's 6,631 lives saved; to supporters of abortion rights, those are 6,631 women who were denied a choice and forced to remain pregnant against their will. (Since then, Texas has made the Act more extreme, including a forced viewing of an ultrasound before abortion, which is currently being battled in federal court.)

The ultimate way to attack the supply side of abortion, of course, is banning it altogether, the main impediment to which is currently the Supreme Court. If the two seminal abortion-right cases -- Roe v. Wade and Planned Parenthood v. Casey -- are overturned by a future court, abortion laws would presumably return to the states. This also wouldn't end abortion, but would make it much harder to obtain. In a paper currently under review, Joyce, along with Ruoding Tan and Yuxiu Zhang of CUNY and Yale, respectively, use data on how many women traveled to New York state -- which legalized abortion three years before Roe v. Wade -- to obtain an abortion between 1971 and 1975, and how many miles they were willing to travel for a legal abortion. They concluded that if Roe were overturned, the "average travel distance to the nearest abortion provider would increase by 157 miles in the 31 states expected to prohibit abortion. Under this scenario abortion rates would fall by 14.9 percent nationally, resulting in at most, 178,800 additional births or 4.2 percent of the U.S. total in 2008."

There is reasonably good data on more established abortion restrictions, particularly state bans on Medicaid funding for abortion. The Hyde Amendment prohibits federal funding for abortion except in extremely limited cases, but states can set their own policies, and 32 states follow the Hyde standard. "Medicaid funding shows the clearest evidence of impact," Lawrence B. Finer, director of domestic research at the Guttmacher Institute, told Salon. "In states where Medicaid funding is not available, about a quarter of women who would have obtained Medicaid-funded abortions instead give birth." (Much of the data on another, older type of restriction, parental involvement laws, is inconclusive or incomplete.)

What's striking in all of this is how the moral argument against abortion alone -- that it is murder of an innocent life -- made by a highly organized movement for decades, including in ever-proliferating crisis pregnancy centers, has failed to persuade so many women. One in three women will still choose to have an abortion before the age of 45, making their own moral decisions based on the realities of their lives and bodies, despite the ever-multiplying legal, cultural and religious roadblocks. The antiabortion argument that all of these women must have been tricked or denied "informed consent," which also allows the movement to avoid seeming as if it is vilifying women as knowing murderers, also has had an impact only at the margins.

In 1994, influential antiabortion activist David Reardon predicted that if women knew about the alleged risks of abortion -- broadly disproved by the medical establishment -- and such knowledge was built into the law, it would make all the difference. "For the majority of women seeking abortions, abortion is a marginal choice. It is an ambivalent and irresolute choice made without an accurate understanding of risks and alternatives. Indeed, it is quite possible that the majority of women seeking abortions, if given a free and informed opportunity, would decide that childbirth is clearly healthier than abortion," he claimed, adding, "This, in turn, suggests that abortion rates would plummet if women were fully informed of risks, protected from coercion, and provided alternatives which address the medical, legal, or social problems which make them feel 'forced' to have an unwanted abortion."

The part about childbirth being "healthier" than abortion is empirically false; as for the rest of Reardon's prediction about the "ambivalent and irresolute" women changing their minds, even the most generous reading suggests that there has been no sweeping change.

The abortion rate has indeed declined slightly overall in the past decade, but it varies dramatically by subgroup. Between 2000 and 2008, for example, the abortion rate declined 8 percent overall, in nearly every group but poor women -- despite the fact that they're the ones disproportionately affected by abortion restrictions. Among poor women, the abortion rate in that period actually increased by 17.5 percent. Still, between 2001 and 2006, a slightly smaller proportion of unintended pregnancies overall ended in abortion -- from 47 percent to 43 percent.

Conservatives tend to see any reduction in abortion, as opposed to a reduction in unplanned pregnancies, as a success, but a lower abortion rate might simply mean unmet need from women who gave up in the face of barriers, not because they wanted to carry to term or raise a child. But while the rate of unintended pregnancy dropped substantially between 1981 and 1994, according to Guttmacher it has "remained essentially flat since." And since then, the rate of unintended pregnancy has actually increased among poor and low-income women -- among women with incomes below the federal poverty line, the unintended pregnancy rate increased 50 percent between 1994 and 2006, while the rate for high-income women declined.

All of this tells us very little about the persuasive power of antiabortion messaging through so-called informed consent, the promise made by Reardon. It does tell us that the easiest way to prevent women from choosing to have an abortion, if not to eliminate abortions entirely, is to make it as hard as possible to access one -- the stick rather than the carrot. As usual, this will fall disproportionately on low-income women, who currently have the fewest resources to circumvent abortion restrictions but possess the highest demand for abortions.

Or as Joyce puts it, "Who gets affected, always? The poor, the less educated, those with fewer resources. It happened prior to Roe, it happened after Roe, and in our study of what would happen without Roe, it happens in the future."