The film that set off deadly riots has plenty of peers. Welcome to the Islamophobic entertainment industry 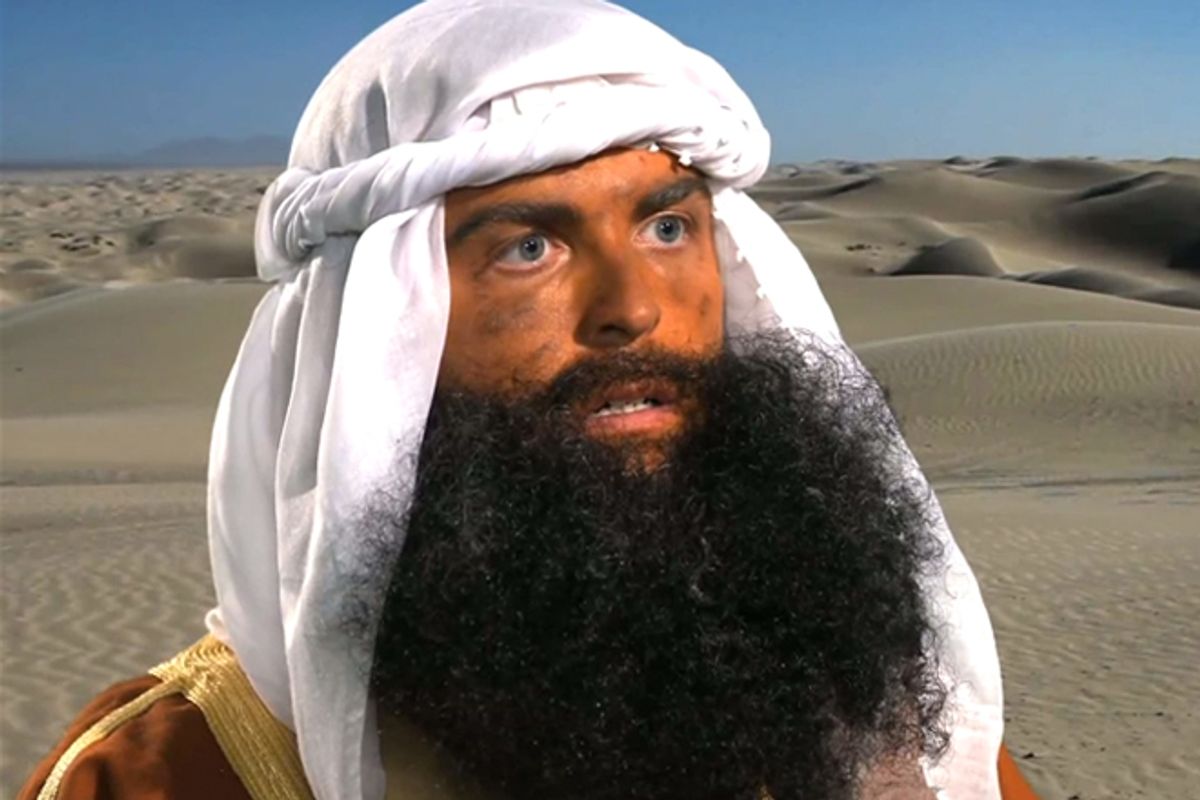 A still image from "The Innocence of Muslims"
--

Not since the Pamela Anderson-Tommy Lee honeymoon tape has a crappier film received so much attention. Having watched the trailer for “The Innocence of Muslims,” it seems to me that the best possible response would be a new episode of “Mystery Science Theater 3000.” Tragically, some in Egypt and Libya apparently thought this crude propaganda was worth rioting over, and the riots have now left four people dead in the U.S. consulate in Benghazi, including the U.S. ambassador to Libya, Christopher Stevens.

The attacks on the American embassy and consulate, and the deaths they caused, are clearly a criminal outrage, and responsibility belongs solely to the killers. There’s obviously no equivalence between producing a crude propaganda film and taking part in a violent riot. (Though new reporting suggests that the film may actually have had very little do with the violence in Libya.) Such a tragedy shouldn’t be used to limit speech, however offensive. If you don’t support the free speech of clearly talentless, bigoted provocateurs like the pseudonymous Sam Bacile you don’t really support free speech.

It’s important to understand, however, that “The Innocence of Muslims” does not spring out of a vacuum, and that the outrage that greeted it was intended, even if the murder of a U.S. ambassador was not. The film – which, Bacile claimed, cost $5 million and was financed by more than 100 Jewish donors, though neither has been verified – shares ideas with a growing transnational movement that preaches hatred of the Islamic faith and seeks to exacerbate tensions between Islam and the West.

Bacile himself acknowledged this goal in an interview with the Wall Street Journal, saying that it was intended to showcase his view of Islam as a hateful religion. "Islam is a cancer," Bacile said. "The movie is a political movie. It's not a religious movie."

A consultant on the film, Steve Klein, promotes similar views on his video program on the international Christian ministry website The Way, described as “a unique and strategic ministry that uses satellite TV to reach into millions of homes across the Middle East and North Africa, America and Canada helping to share the love of Christ and to encourage Christians in their faith.” In this video, he claims that, “I do know through my source, yes I do have sources, that many of Ahmadinejad’s people have come across from Tijuana into California” in order to carry out suicide bombings. Calling a worldwide Muslim uprising “inevitable,” Klein warns that, “What we’re seeing going on in Egypt translates throughout all of the world.” He says, “What’s happening in Egypt translates in Bosnia, the European hub, which we have identified with Kosovo, Albania and Bosnia, with all of the horrible, wicked things that they’re doing there. Because, after all, they’re Muslims — what would Muhammad do? The same thing. Muslim Brotherhood, Ahmadinejad, doesn’t matter if they’re Sunni, Shi’ite, Sufi, eventually they’re gonna attack and erupt.”

The use of films to promote an anti-Islam message has also been the preferred method of the Clarion Fund, founded by Canadian-Israeli rabbi Raphael Shore, who produced the 2006 movie "Obsession: Radical Islam’s War Against the West." In 2008, some 20 million copies of "Obsession" were distributed to homes in presidential election swing states. The Atlantic’s Jeffrey Goldberg described the film as “designed to make naive Americans believe that B-52s filled with radical jihadists are about to carpet-bomb their churches, and are only awaiting Barack Obama's ascension to launch the attack.”

Earlier this week, Reuters reported that notorious Dutch anti-Islam campaigner Geert Wilders has been receiving support from a number of American conservative anti-Islam groups, among them Daniel Pipes’ Middle East Forum (Pipes is among those interviewed in "Obsession"), and David Horowitz’s Freedom Center. “Islam is not a religion, it's an ideology,” Wilders has said, “the ideology of a retarded culture.” He has also compared the Quran, the Islamic holy book, to Adolf Hitler’s "Mein Kampf."

This idea of Islam – not just an extreme interpretation of Islam, but Islam itself – as a new form of Nazism, an existential threat to Israel and the West, is a belief that binds together the transnational anti-Islam movement. This is also what underlies the beliefs of self-described “counter-jihadists” like Oslo terrorist Anders Breivik, who cited the Clarion Fund’s "Obsession" 10 different times in his manifesto. For this movement, fomenting unrest, hatred and conflict between Muslims and non-Muslims is a feature, not a bug.

Last year, a Center for American Progress report, Fear, Inc. (which I co-authored), described the links between a number of Islamophobic scholars and activists in the U.S., and the donors behind them. Whoever Bacile turns out to be -- Religion Dispatches’ Sarah Posner raises some interesting questions about Bacile’s true identity, as does Goldberg – it will be very surprising if there is not some overlap between the funders of his film, and the activists and donors we examine in our report. Making dumb, offensive movies about Muslims is a part of free speech. But so is reporting and writing about the characters that fund and promote them.