How Congress left our embassies exposed

One reason our embassies are unable to protect themselves? Congress has been slashing their funding for years 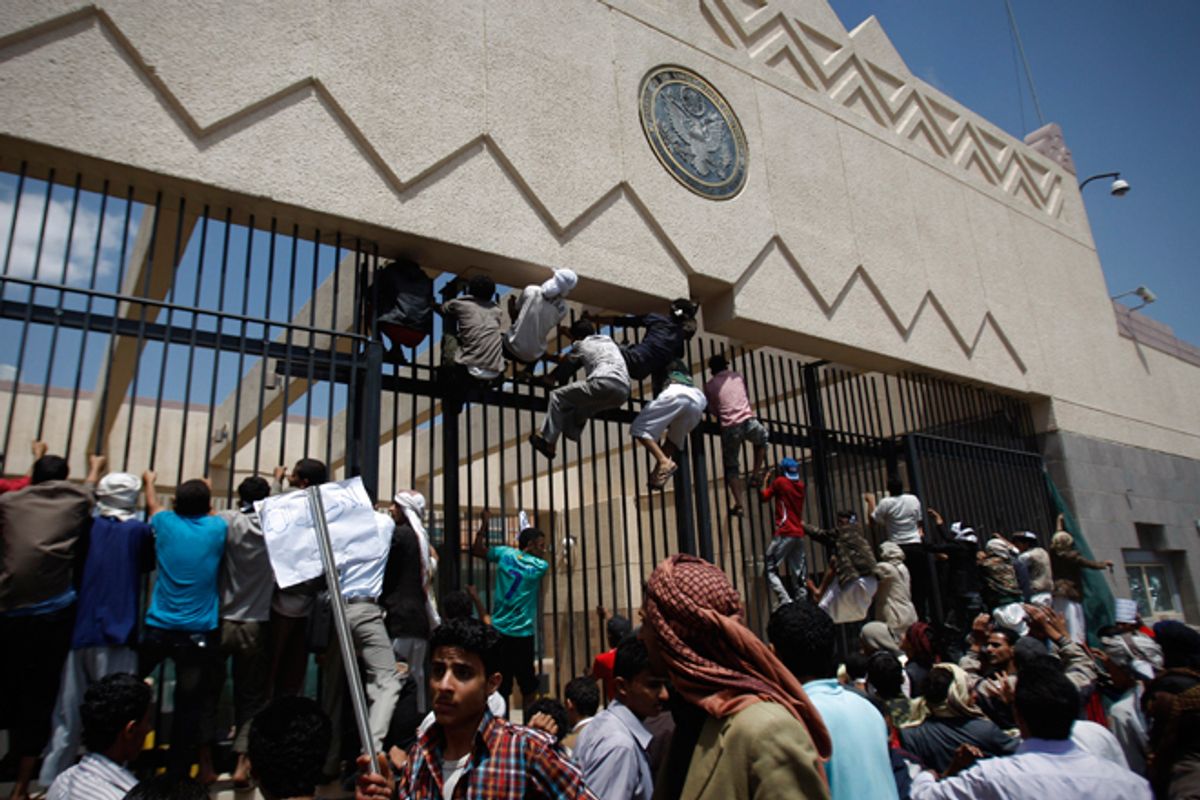 Yemeni protestors climb the gate of the U.S. Embassy during a protest about a film ridiculing Islam's Prophet Muhammad, in Sanaa, Yemen, Thursday, Sept. 13, 2012. (AP/Hani Mohammed)
--

Responding to mob attacks on a U.S. embassy and consulate in Egypt and Libya, Sens. John McCain, Joe Lieberman and Lindsey Graham said the following: “[W]e now look to the Libyan government to ensure that the perpetrators are swiftly brought to justice, and that U.S. diplomats are protected.” Well, if the senators want to better protect American diplomats, they will have to convince their colleagues. The Benghazi consulate where Ambassador Christopher Stevens was murdered had no Marines surrounding it, no bulletproof glass and no reinforced doors. Libyan security officials were partly in charge of securing the building.

Among the worst trends in U.S. foreign-policy making in recent decades is the decline of the State Department and the corresponding rise of the Defense Department. State is responsible for American diplomacy — the hard work of negotiating and maintaining relations with other countries; Defense (formerly the Department of War, a more honest designation) looks after war-making and protecting national security. Few things reflect America’s skewed foreign-policy priorities more than the funding discrepancies between the two departments. Consider the numbers:

As Stephen Glain puts it in his wonderful and disturbing 2010 book “State vs. Defense,” “the Pentagon has all but eclipsed the State Department at the center of U.S. foreign policy.” It wasn’t always like this. With a few notable exceptions, during the first years of the Cold War, presidents relied far more on their State Department heads for advice than their Defense Department counterparts. Giants like George Marshall, Dean Acheson and John Foster Dulles had more control in the Truman and Eisenhower administrations over foreign-policy making than anyone else in the country, with the president excepted. It was assumed that their focus on grand strategy and knowledge of international affairs gave them more expertise in national security than the Defense Department secretaries, who were military men and might see the world more narrowly.

That balance began to change in the Kennedy administration. Defense Secretary Robert McNamara had far more influence over Kennedy and Lyndon Johnson than did Secretary of State Dean Rusk. The switch reflected corresponding changes in U.S. foreign-policy emphasis from diplomacy to militarism. Since then, with a few important exceptions, Defense secretaries have strongly overpowered their State Department equivalents. At the very least, they have had a much greater role in American endeavors overseas, simply because they have far greater resources and power. Washington Post reporter Dana Priest explained it in her book “The Mission”: “The military simply filled a vacuum left by an indecisive White House, an atrophied State Department, and a distracted Congress … long before September 11, the U.S. government had grown dependent on its military to carry out its foreign affairs.”

Secretaries of State have had to beg for crumbs from Congress, which sees diplomacy as an easy thing to cut back — who lobbies for more money for diplomats? Military contractors have all the money. In addition, no president is criticized for gutting State, while taking even a nail file to Defense’s obese budget elicits slurs from the opposing party. Condi Rice demonstrated this problem. In 2000, as Republican presidential candidate George W. Bush’s foreign policy advisor, she said that it wasn’t the job of Defense to perform civilian duties. “We don't need to have the 82nd Airborne escorting kids to kindergarten,'' she quipped. By 2008, she was saying, “I still think that’s true, but somebody's got to do it. And what we are learning is that the weakness of civilian institutions to do the business of state-building is one of the true lacuna, one of the true holes in our national capacity.” Indeed it is. But the big loser has been American diplomacy. Defense has so much money that it has essentially taken over both functions, as well as many others.

What does all this have to do with the diplomats killed in the Middle East on Tuesday? Well, embassies and consulates can’t be expected to have strong security apparatuses without any funding. They don’t have nearly enough staff members, let alone enough financial support for guards and protection. Who is going to control a mob of hundreds storming a U.S. embassy: an intern? Embassies are left exposed and often powerless in foreign countries, forced to defer to military officials on bases where they do not even belong.

The United States had virtually an entire city inside Iraq in the 2000s -- 10 square kilometers that even the Chinese military couldn’t penetrate if it tried. The thing was as protected as any site in the history of the world, with concrete blast walls, T-Walls and barbed-wire fences. It couldn’t be entered except at checkpoints, all of which were controlled by Coalition troops.

American diplomats and civilian workers do not come close to competing with that. They are underfunded, underappreciated and mostly unknown to the American public. The tragedies on Tuesday in Cairo and Benghazi are symbolic of the State Department’s weakness in U.S. foreign policy. Too bad there is little hope of reversing the balance any time soon.