Our city, a crime scene 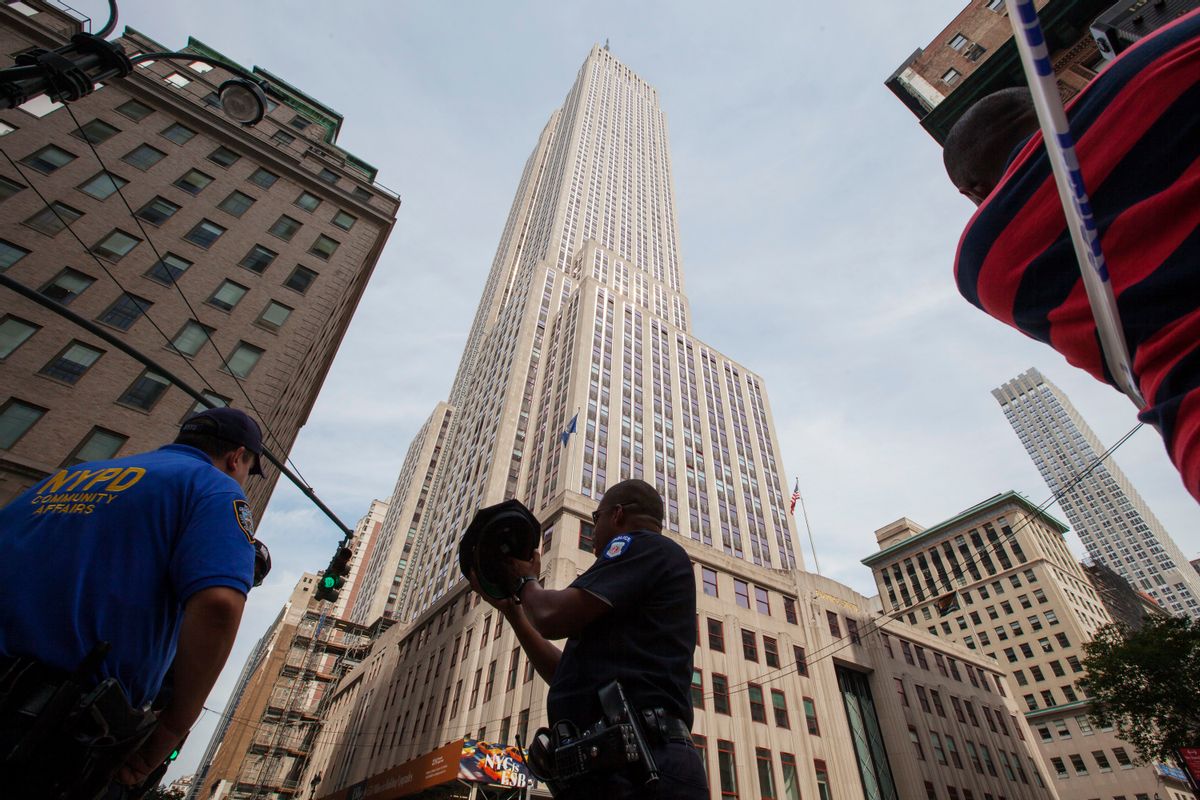 Of all the crimes that occurred in New York City over the past month, three became bona fide water-cooler fodder: The knife-wielding man in Times Square, killed by police in a hail of bullets; the Empire State Building shooter, a disgruntled employee who went after his boss with a handgun; and, as of yesterday, the 73-year-old birdwatcher who was raped in Central Park.

All in all, the crimes add up to three deaths and one rape, and two of those deaths were of the perpetrators themselves. Tragic incidents all, but also, unfortunately, business as usual in a city like New York, which suffered 34 murders and 128 rapes during roughly the same period.

So why did these three crimes get the lion's share of our attention? The common link between them, of course, is the stage upon which they played out. In cities where crimes happen every day, the small handful that occur in famous settings become famous themselves, larger symbols that people use to evaluate the state of their city. "All the cards and letters and flowers -- we didn't think there were that many good people in the world," said the Brazilian family of a Central Park murder victim in 1995. "But I guess because it happened in Central Park, it's like a postcard to the whole world."

We look to these locations as urban-chaos barometers. They're unfairly placed, in privileged neighborhoods where crime is sporadic and sensational, not chronic and debilitating. Still, they become convenient shorthand for how our city is doing. "The whole point to all the attention [on Central Park, Times Square and the Empire State Building] is that people are more interested in things that they identify with," says Frank Zimring, a professor at UC Berkeley School of Law and author of "The City That Became Safe: New York's Lessons for Urban Crime and Its Control." "We're more worried about Central Park and Times Square not because crime used to be high there, but because we think of those places as our New York."

Indeed, these places were never nearly as dangerous as we thought of them. Between 1979 and 1986, there were only 35 homicides in Central Park. (Some years there were as few as two.) The precinct along the park's northern border had 18 times that many. Even the tony lower 5th Avenue border had three times as many murders as the park itself.

But in an anxious city, even 35 murders over seven years could give us the jitters if they happened in a particular place -- a place we already feared. Which is why the response to yesterday's Central Park rape has been entirely different -- most of the media coverage has been reported with a tone of shock that these things can still happen. A knife-wielding maniac in Times Square, steps from the Toys R Us ferris wheel? A rape in Central Park, among all the Spandexed cyclists and straw-fedora-topped hipsters? Even the Empire State Building, encircled by a post-9/11 military-grade police presence, seems like a highly improbable place for a shooting to happen today.

Of course, the bizarre nature of these crimes makes them seem more like outliers, which helps. (The suspected Central Park rapist is a middle-aged white man, and the Times Square knife wielder used to dress as a ninja). Still, it's impossible not to see these crimes through the safer, tidier prism we live in today. "Certainly the public is a lot calmer now," says Zimring.

When Trisha Meili was raped in Central Park in 1989, the 28-year-old jogger was one of 3,254 reported rapes in the city that year. It was hours before her nearly lifeless body was discovered. The investigation was an unprofessional mess, and five black and Latino teens were wrongly convicted. Their false confessions were filled with inconsistencies, their DNA didn't match the DNA at the crime scene, and three of them later sued the city for malicious prosecution.

Fast-forward to yesterday's rape, a brazen act committed in broad daylight. It was, astonishingly, the first reported rape in Central Park this year. Surveillance images of the alleged perp were quickly posted online. Within hours, a suspect was in custody. But perhaps most emblematic of the city's newfound calm was the victim's response. "I won't let anything keep me from enjoying the park," she told the New York Post just one day after the attack. "I'm not going back looking like this, but of course I'll go back. It's my park."

It's safe to say that most people will do the same, just as they quickly returned to Times Square and the Empire State Building in the aftermath of those incidents. Today, such crimes only seem to highlight how safe those places have become, and the surprised, wide-eyed coverage of them confirms our sense that there's nothing to fear. "I think this is pretty disgusting, and so shocking it would happen on such a beautiful day in such a beautiful park," 29-year-old Emily Loubaton of Brooklyn told a reporter of the rape. "I'd like to believe that New York City has turned a corner for the better. I mean, this isn't the '70s."

Asked why she was in the park that day, Loubaton said she was on a scavenger hunt, poking around in its quietest corners.