Peggy Noonan is wrong about your birth control

Controlling one's fertility is an economic issue. Why can't conservatives get that? 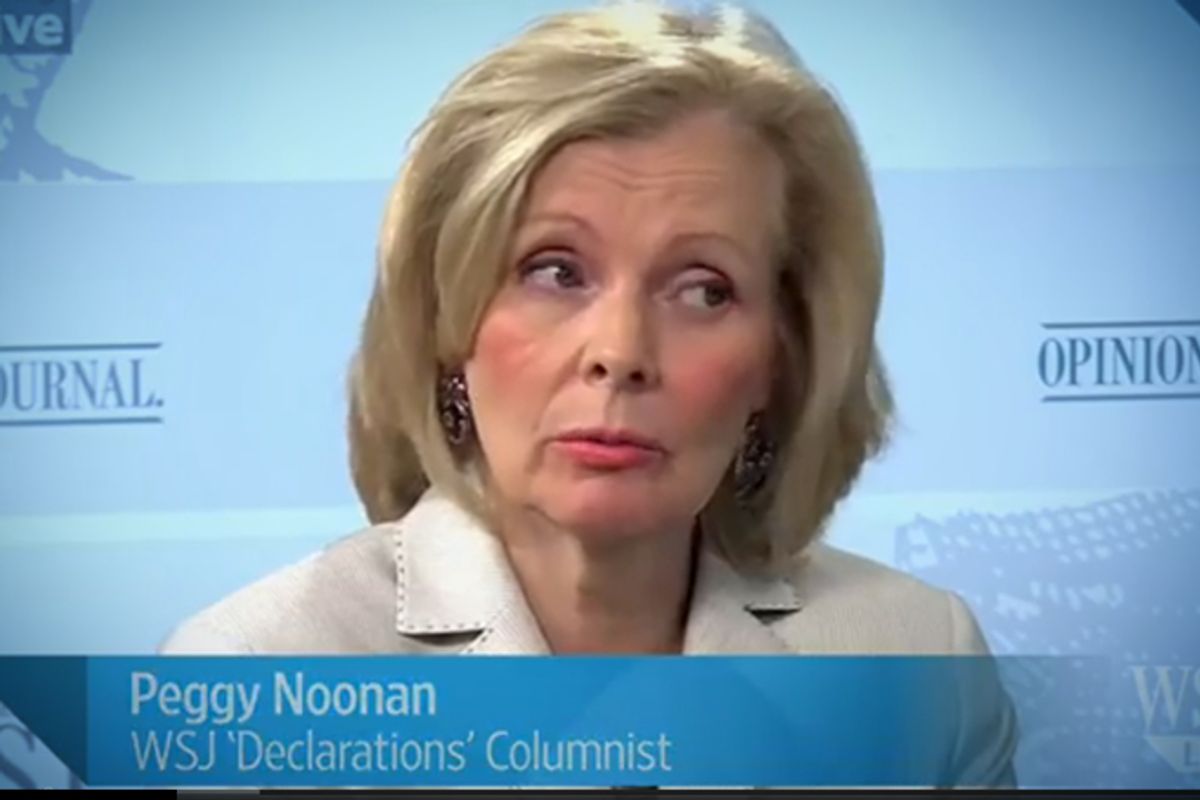 Peggy Noonan recently magnanimously pronounced Sandra Fluke "not, as Rush Limbaugh oafishly, bullyingly said, a slut. She is a ninny, a narcissist, and a fool."  Why? Because "she really does think — and her party apparently thinks — that in a spending crisis with trillions in debt and many in need, in a nation in existential doubt as to its standing and purpose, in a time when parents struggle to buy the good sneakers for the kids so they're not embarrassed at school ... that in that nation the great issue of the day, and the appropriate focus of our concern, is making other people pay for her birth-control pills."

Since Noonan has a sizable platform and this apparently needs to be said roughly once a week, a quick review: Controlling one's fertility is an economic issue. So is the overall cost and provision of healthcare through private insurance -- paid for by "other people's" money, your money, your employer's, in a pool to lower risk, which is how it largely works in this country. Unintended pregnancy (and ovarian cysts, in the case of Fluke's testimony) still costs that pool far more than preventing that unintended pregnancy.  (As for "a nation in existential doubt as to its standing and purpose," such doubt must hit home for the ever-rambling Noonan.)

In any case, though the Democrats certainly paraded reproductive health front and center at the convention last week, it's actually the right that is keeping the struggle alive, with ever-mounting lawsuits and legislation seeking to circumvent Obamacare's classification of contraception coverage as preventive care. Yesterday, Missouri -- home of Todd Akin -- did something unprecedented: Both chambers of the Legislature overrode a veto to enact a law flouting the Affordable Care Act, allowing any employer to refuse to cover birth control if it violates the employer's conscience.

The bill's supporters tried to make it about abortion, which is not covered under the provisions, and also about small businesses and big government. “This bill is about protecting life. This bill is about protecting Missouri businesses from the overreach of government,” was how Rep. Sandy Crawford put it. (No matter how many times the right repeats it, the morning after pill is not abortion.) Similarly, in the Baptist news agency's report on this week's latest private-sector lawsuit against the policy, from the craft store Hobby Lobby, it was referred to as the "contraceptive/abortion mandate." An attorney for the Becket Fund, which has represented many of the previous plaintiffs against the policy, said in a conference call, "We hope that this lawsuit, on behalf of such a large and prominent evangelical Christian business, will draw attention to the fact that the government is trying to force people of all different faiths to violate their faith. This is not by any means a Catholic-only issue. Some of the drugs involved in the mandate can cause an early abortion. And many Americans who are not Catholic have a problem with this."

A few days ago, Ann Romney sat down with an Iowa television interviewer and tried to make her pitch to women. After a question she refused to answer about gay marriage, the anchor, David Nelson, asked, "Do you believe that employer-provided health insurance should be required to cover birth control?" Romney replied,  "Again, you're asking me questions that are not about what this election is going to be about. This election is going to be about the economy and jobs." She added, "So really, if you want to try to pull me off of the other messages, it's not going to work." Unfortunately for Romney, the Missouri state Legislature and swaths of the Republican base haven't gotten the memo.