Should "Sam Bacile" be jailed?

Absolutely not! But an Ivy League professor, writing in USA Today, wants to lock him up for his hateful film 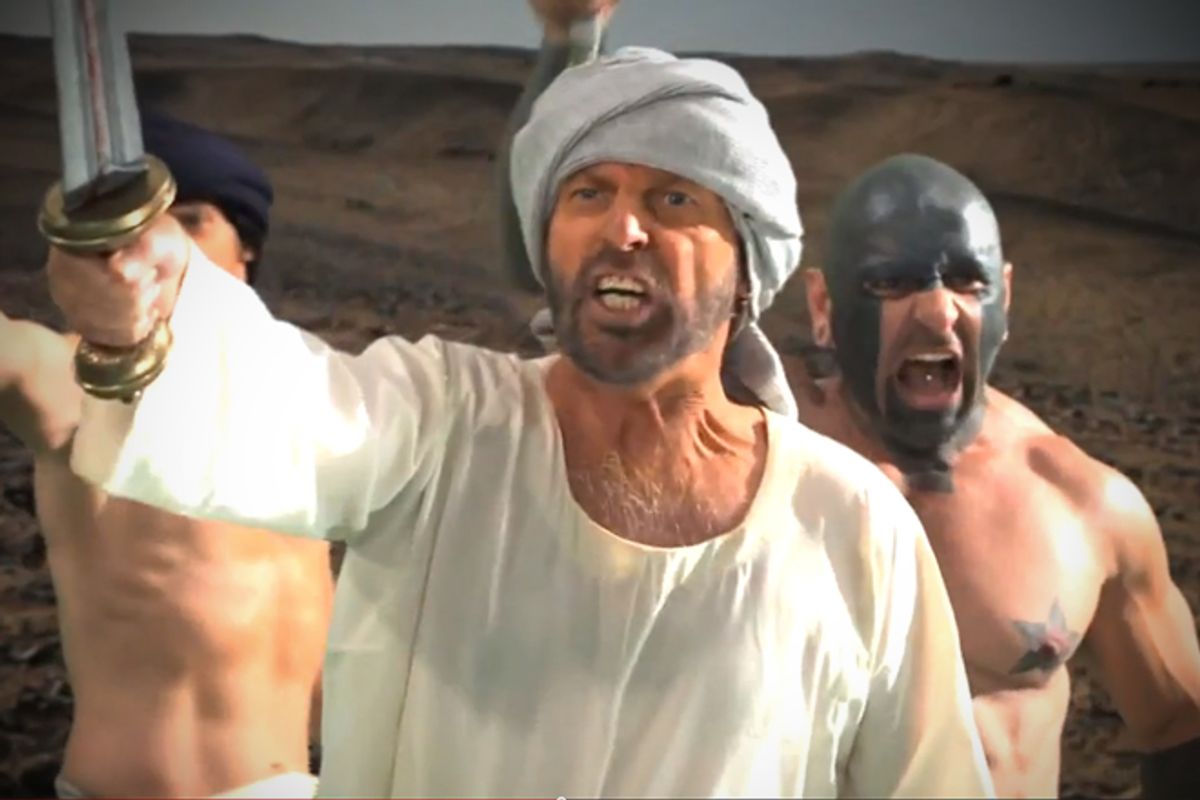 A version of this article originally appeared at Popehat.

What does it take to be a professor at an Ivy League university and to get an opinion published in USA Today?

Anthea Butler is an associate professor of religious studies at Penn. Yesterday she called for the arrest of "Sam Bacile" — the "person" associated with the anti-Islam movie associated with violent riots in Libya and Egypt. I say "Sam Bacile" and "person" because it appears increasingly likely that "Sam Bacile" is a made-up persona, possibly of a convicted fraudster named Nakoula Basseley Nakoula. (Moreover, it's increasingly in doubt whether the worst violence in the embassy attacks was inspired by the film or just used by the anti-film mobs as an opportunity to launch an assault.) Anyway,  Butler called for his arrest on her Twitter account, then swiftly made her account private when criticized.

Good Morning. How soon is Sam Bacile going to be in jail folks? I need him to go now.When Americans die because you are stupid…

And people do to jail for speech. First Amendment doesn't cover EVERYTHING a PERSON says.—

First — though this is a situation in which mobs are rioting, Americans have died, and the First Amendment rights of Americans are in question, professor Butler chooses to frame the piece as being about the controversial nature of things she said on Twitter — things she does not even specify or quote — and about her feelings justifying those tweets:

My initial tweet about Bacile, the person said to be responsible for the film mocking the prophet Mohammed, was not because I am against the First Amendment. My tweets reflected my exasperation that as a religion professor, it is difficult to teach the facts when movies such as Bacile's "Innocence of Muslims" are taken as both truth and propaganda, and used against innocent Americans.

Let me just say this: If a YouTube video produced by a convicted felon renders it difficult for you to teach kids smart enough to get into Penn about religion, then you might want to consider another profession that does not require communication skills.

Next up, this howler:

If there is anyone who values free speech, it is a tenured professor!

In fact, American universities are at the forefront of stupid forms of censorship, as we frequently discuss at Popehat; the FIRE tirelessly fights against them.

So why did I tweet that Bacile should be in jail? The "free speech" in Bacile's film is not about expressing a personal opinion about Islam. It denigrates the religion by depicting the faith's founder in several ludicrous and historically inaccurate scenes to incite and inflame viewers. Even the film's actors say they were duped.

A logic professor — excepting, perhaps, one at Penn — would give this an "F." The statement that the film "is not about expressing a personal opinion about Islam" does not flow from anything else Butler says. The opinion may be vile, and it may be expressed in a vile way intended to offend, but that does not make it less a personal opinion. Moreover, whether something is a "personal opinion" is not the relevant First Amendment inquiry.

Bacile's movie is not the first to denigrate a religious figure, nor will it be the last. "The Last Temptation of Christ" was protested vigorously. The difference is that Bacile indirectly and inadvertently inflamed people half a world away, resulting in the deaths of U.S. Embassy [sic -- the sentence trails off in original]

Here Butler undermines her own "case" — such as it is — for jailing "Bacile." As anyone with a nodding familiarity with the First Amendment would know, whether Bacile can conceivably be prosecuted for "incitement" or any such crime depends on his intent to do so and on the immediate connection between his acts and the resulting violence. The First Amendment only permits punishment of "incitement" that is intended to cause, and likely to cause, imminent lawless action. Action that is "indirect" and "inadvertent" cannot be actionable incitement. You'd think that a college professor, before she spoke, would ... you know, never mind. Even I can't carry that off.

Unfortunately, people like Bacile and Terry Jones, the Florida pastor who provoked international controversy by burning copies of the Quran, have a tremendous impact on religious tolerance and U.S. foreign policy.

What does that mean? Are there people who were tolerant of other faiths, but stopped being tolerant after they saw a YouTube video? Is U.S. foreign policy being driven by YouTube videos?

Case in point: Gen. Martin Dempsey, chairman of the Joint Chiefs of Staff, called Jones on Wednesday to ask him to stop promoting Bacile's film. Clearly, the military considers the film a serious threat to national security. If the military takes it seriously, there should be consequences for putting American lives at risk.

I had to read that three times to make sure I hadn't gone nuts. An American college professor — one who just paragraphs earlier announced that college professors are self-evidently supporters of the First Amendment — just said that speech should be punished by the government if the United States military thinks it should be. Is this real life?

While the First Amendment right to free expression is important, it is also important to remember that other countries and cultures do not have to understand or respect our right.

This is a true statement — other countries don't have to adopt or respect our legal system. But what does that have to do with whether someone can or should be prosecuted in America?

In short, having tweeted demands that an American be arrested for producing a movie, Anthea Butler writes a column that is mostly about her, in which she promises but utterly fails to explain why the filmmaker should be arrested.

These are serious times, and this is a serious subject. Professor Butler’s apologia for her calls for censorship is not serious.  I wish we could expect better from a professor at a prominent university.