When the big lie works

Twice as many conservatives believe our Christian president is Muslim as they did in 2008. Congratulations, Mitt! 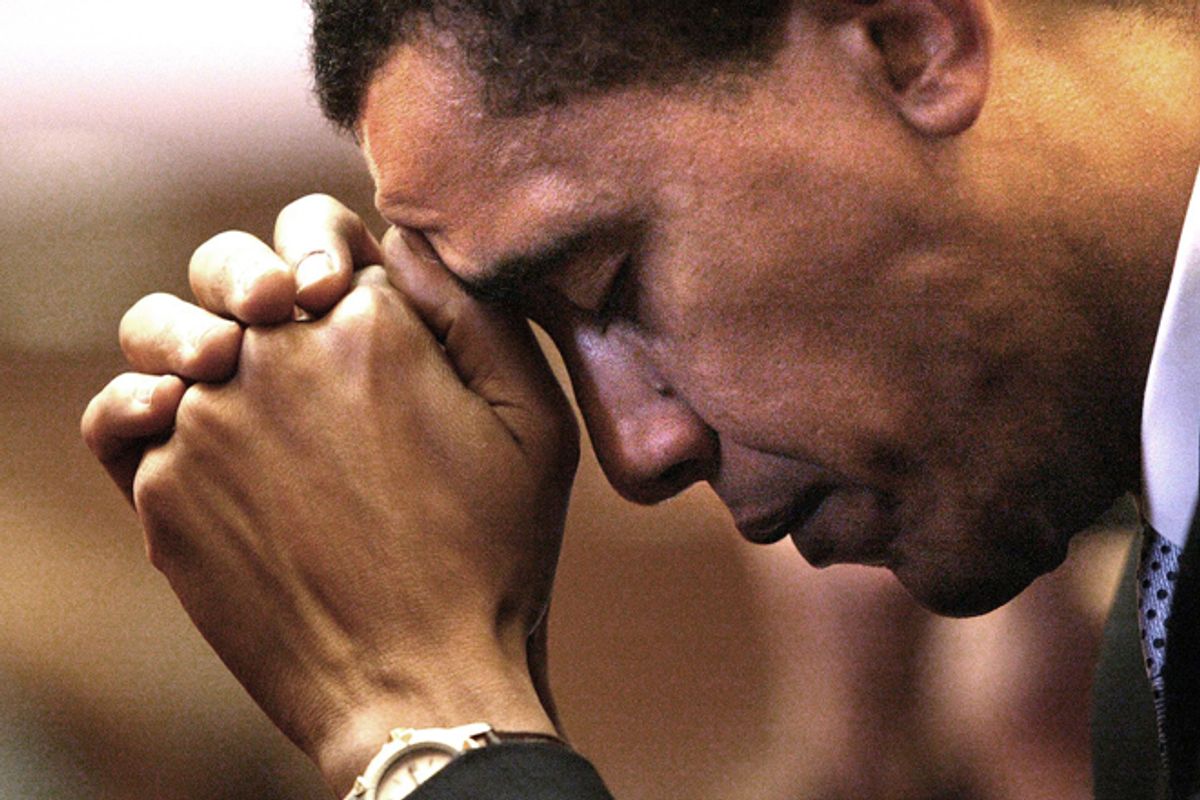 If you wonder why a desperate Mitt Romney rushed to lie about President Obama's handling of crises in Cairo and Benghazi and make the ugly claim that Obama's first response was "to sympathize with those who waged the attacks," the latest poll from the Pew Forum on Religion and Public Life helps fill in the blanks.

Unbelievably, the poll finds that the percentage of Republicans who believe that Barack Obama is Muslim, not Christian, has doubled since October 2008. It was actually a little higher in August 2010, right before the GOP administered its midterm "shellacking." But in the most recent Pew poll on the topic, in July 2012, an astonishing 34 percent of "conservative Republicans" and 30 percent of all Republicans described the president as Muslim.

Overall, 17 percent of registered voters say Obama is Muslim while 31 percent say they don't know what religion he is; only 49 percent know the truth, that he is Christian.

How is it possible that almost four years after we elected Obama president, the number of Republicans who think he's Muslim could double, and that less than half of all registered voters know what religion he professes (in a country where religion matters)? Oh, I don't know. Maybe because virtually every Republican politician has either encouraged or tolerated the far-right lunatic fringe, from crackpot "birthers" who insist the president wasn't born here, to Romney campaign surrogates like John Sununu who just last month insisted the president "needs to learn what it means to be an American."

When House Speaker John Boehner dismissed evidence that a growing number of Republicans believe Obama was a Muslim, telling NBC's David Gregory, "it's not my job to tell the American people what to think"; when presidential candidate Rick Santorum refused to correct a supporter who called Obama "an avowed Muslim," saying "the president's a big boy, he can defend himself and his record"; when Romney likewise remained silent when an audience member accused Obama of "treason" and later told reporters, "I don't correct all of the questions that get asked of me"; and of course, when Romney "joked" that "nobody's ever asked to see my birth certificate" – well,  moments like those reinforced the big lie and encouraged the right wing to continue to believe it.

On one level, though, you can understand it, because it turns out that playing up fears about Obama's religion may be the GOP's only chance to beat him. It  may not even be enough that the president is black: Even some white Southerners are telling pollsters that they'd rather vote for the black guy than for the rich guy. To be fair, some anti-Mormon prejudice also factors into that equation. But you don't see Obama or his surrogates playing up fears about Romney's Mormon beliefs to gain votes.

I've said it before: Romney and Republicans have every right to criticize the president's handling of the aftermath of uprisings in Egypt and Libya, as do Democrats who have reservations about Obama's Middle East policies. But they don't have the right to lie about it. It's impossible to ignore the way that Romney's accusation not so subtly plays into that pervasive GOP belief that the president shares a religion with our enemies. Obama is not merely weak in dealing with them, in the Romney narrative; he actively "sympathizes" with them and delivered "an apology for America's values" instead of a rebuke.

I wrote yesterday that "Mitt Romney will never be president" because Americans will be appalled by his deceit. I still think that. But Alex Pareene had a smart rejoinder, noting that the backdrop of rioting Muslims attacking American embassies (which continue in Yemen today) "is the sort of thing that will make certain voters more, shall we say, sympathetic to the candidate who is more shameless about hating Muslims. Romney understands this and is willing to capitalize on it." He's right. I'm counting on more Americans being appalled by Romney's shamelessness than reassured by it, but it's always risky to bet against the effectiveness of GOP fear-mongering.

Romney has made clear that he's never going to pivot to the middle to win over independent voters; he obviously thinks his only path to victory is firing up the backward, racist and xenophobic elements of the GOP base. Now we know that strategy has succeeded in doubling the percent of conservatives who think the president shares a religion with people they see, one dimensionally, as the enemy. Well played, Mr. Romney. We'll see where it gets you in November.