You bet your life

With National Suicide Prevention Week upon us, a look at the most deadly of addictions: Gambling 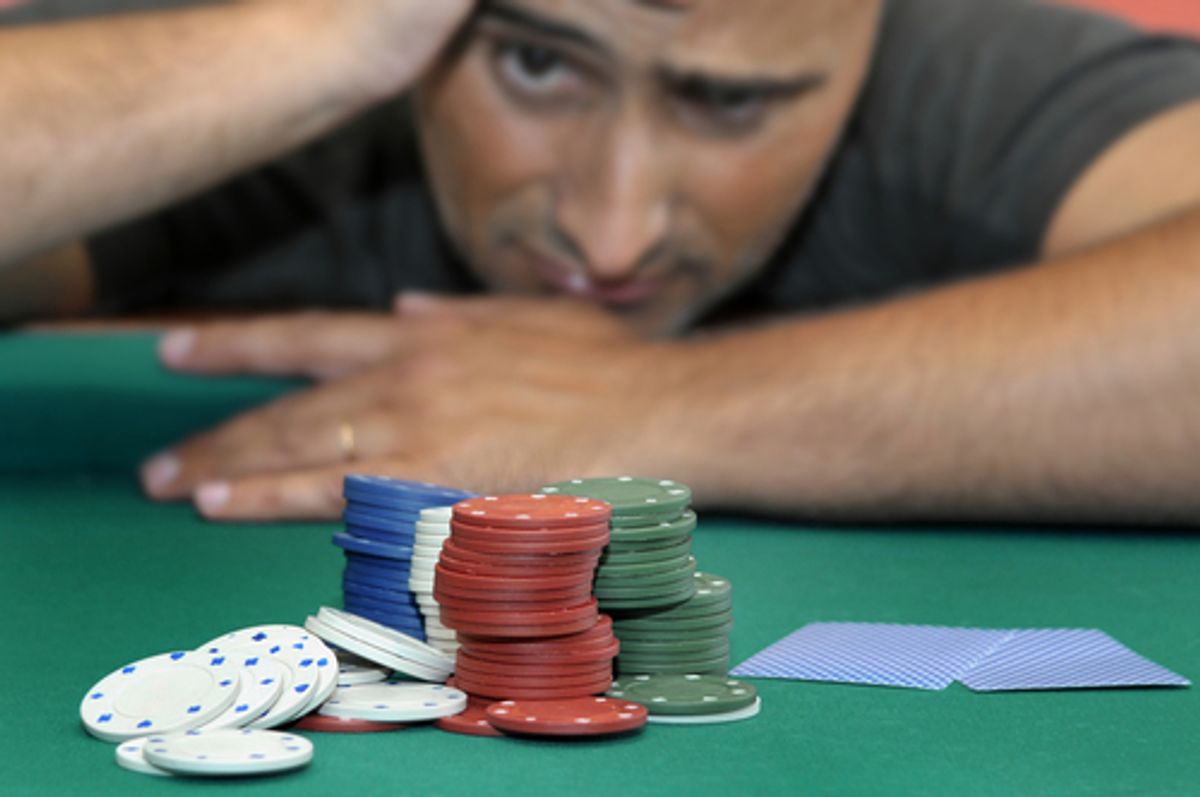 Of all the destructive habits in the world, gambling would seem to be one of the more benign. It doesn't blow out your liver. It won’t make your nose cave in. Even after the most appalling run of bad luck, you can be reasonably sure that you won't be carted away, having expired with a mouth full of vomit. No harm done. It's only money.

You can keep telling yourself this until the moment you kick the chair out from under you.

Suicide rates among gambling addicts are staggeringly high. The National Council on Problem Gambling (NCPG) has estimated that one in five problem gamblers attempt to kill themselves, about twice the rate of other addictions. The reasons for this fact are both blindingly simple and impossibly complicated. And the central befuddling fact is this: Gambling kills you because it doesn't kill you.

For the majority of addictions, how much you spend is regulated by how much the body can endure. There is only so much heroin, cocaine or vodka you can consume before you end up in a hospital or a morgue. Gambling is subject to no such constraints. “The amount of financial devastation you can wreak plays a big role in this,” says Keith Whyte, the NCPG Executive Director. “You can bet $50,000 in a single hand, every minute.”

In terms of the gambler’s tendency toward suicide, however, these factors serve only to cloud the issue. The most reliable killer of people with gambling problems can be summed up in a single word: debt. Because once negative equity enters the picture, gambling addiction moves into a category of its own.

A study undertaken in Hong Kong in 2010 found that of the 233 gambling suicides in the city over the course of a year, 110 of the victims had significant debts related to their problem. The majority of these were male, middle-aged, married and employed. Few showed evidence of prior psychiatric problems. They appeared normal in every way except that they had gambled their way into a bottomless pit.

It’s tough to put a number on how much debt Americans incur due to gambling: people lie about the problem; the landscape shifts too quickly to keep track. We do know that callers to a Wisconsin helpline a couple of years back claimed an average of $43,800 in gambling-related debts—up from $36,000 the previous year. One study estimated that US problem gamblers owe, on average, between $55,000 and $90,000. Another reported that 90 percent of problem gamblers use their credit cards to play.

None of these figures, though, get to the heart of the issue like the following passage, which was posted on the NCPG website: “I'm sitting here trying to figure out how to tell my husband that once again we have a major credit card bill on the way. I swore to him that it would never happen again. I believed my vow, especially when I saw how hard he had to work to pay off the last debt I ran up. How can I tell him I've done it again?”

This is where, in terms of suicidal tendencies, gambling addiction leaves the pack. “If you stop drinking, you can still go get a job,” says Whyte. “But once you’ve got a gambling debt twice your annual income, it’s hard to come back from that. In our society, living without alcohol is a lot harder than living without money.”

Gamblers who have landed themselves in debt, then, are no longer simply chasing a high, they are trying to evade catastrophe—as Whyte puts it, “You’re always one bet away from winning everything back.” And, again, there is no limit to the amount of money that can be devoted to this pursuit. Unless the gambler just stops, which is unlikely without outside intervention, the problem becomes compounded with every attempt at a solution. It is the cruelest catch-22.

There was a story in the paper a few weeks ago about a Vietnamese gambling addict who, having been hounded by creditors, dug a hole beneath his kitchen and hid there for two months. There’s a certain symbolic resonance to this story. For people with this addiction, there is an overwhelming urge to vanish, to remove yourself from the world.

“There’s a sense of stigma and shame,” Whyte says. “A lot of people still don’t understand that you can be addicted to a behavior. People tend to view gambling as a moral failure.” So adept are gambling addicts at hiding this failure, the people around them are often blind to it until the bailiffs come knocking on the door.

As the problem progresses, pathological gamblers become insufferable, riddled with anxiety, anger and paranoia. They tend to be deceitful, manipulative and preoccupied, and always seem to have forgotten to bring their ATM card when they go out. People get fed up with it; it wears them down. And so the gambler eventually finds himself alone—which becomes especially true after the explosive revelation of his debts.

The gambler’s sense of isolation, says Whyte, is compounded by the “vast disparity of resources” devoted to treating the various forms of addiction. “A problem gambler can find it much harder to get help,” he says. “Some people don’t even know it’s treatable.” According to Volberg, fewer than 5% of problem gamblers enter into treatment. Left unchecked, feelings of helplessness and hopelessness proliferate. Very often, gamblers will come to the conclusion that there is only one way out. About 80% at least think about killing themselves.

We have no real way of knowing how many people follow through. Gamblers are, by nature, impulsive and secretive—the ones who leap from a multi-story parking deck after a bad night generally don’t leave suicide notes, while those who do tend to gloss over the reasons for their self-annihilation. Certainly, it’s unlikely that there has ever been an autopsy report that cited “gambling” as a cause of death. Which is not to say, of course, that it wasn’t.