Far right: Our speech is freer! 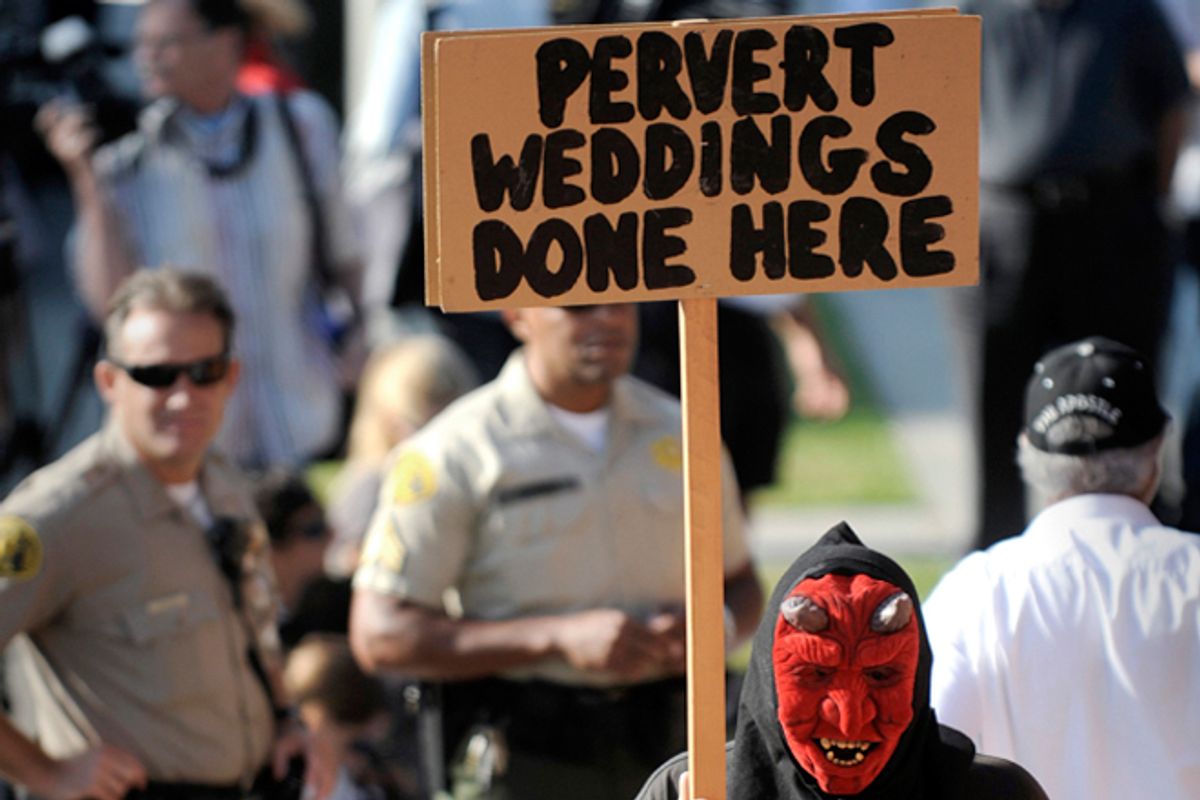 A month ago, when an armed man attacked the Family Research Council in Washington, D.C., conservatives blamed the fact that the organization had been labeled a “hate group” for inciting the attack. Never mind that the hate group label was intended to condemn the sort of violence that the Family Research Council’s extreme homophobic vitriol encourages. Tony Perkins, head of the FRC, said that groups that labeled his organization a hate group should be “held accountable for their reckless use of terminology.”

But now, when an offensive anti-Islam film promoted by a right-wing Christian preacher is clearly to blame for violent riots spreading thought the Middle East and appeared to have played a role in the death of a U.S. ambassador and three other Americans, the far right in America is defending extremist rhetoric against Islam and attacking the Obama administration for condemning the inflammatory film. Blind to the diplomatic urgency of quelling violence, let alone their own hypocrisy, conservatives joined Mitt Romney in accusing the president of not standing up for free speech.

The only way to square this circle is to understand that conservatives in America are not free speech absolutists but rather apply the notion of “American exceptionalism” to their own tribal superiority. In their minds, blaspheming the religion of a billion of the world’s people and sparking violent outrage is permissible free speech because, well, these conservatives believe that Islam is an inferior and evil religion. As Michelle Malkin tweeted in an exchange we had on the day after the Libya and Egypt attacks, “What part of the centuries-old rallying cry "BEHEAD THOSE WHO INSULT ISLAM" don't you understand?” (the caps are hers). Malkin then pointed me to a book by Bruce Bawer that argues that when we do crazy things like contextualize the violence of a fringe few in the broader sea of a billion peaceful Muslims who are horrified by such violence, we are “appeasing” radical Islam and therefore surrendering our values, especially freedom of speech.

But such “American exceptionalism” applies extra special to fundamentalist Christians within our own borders. Presumably these most exceptional of the exceptional should feel free to call gay people criminals and child molesters who should all be deported, and their right to free speech trumps the rights of others to label this speech hateful. Those spewing the hate are simply “expressing their beliefs” but those responding are being “reckless.” It doesn’t seem to matter that, for instance, on this issue, the vast majority of Americans oppose the extreme anti-gay rhetoric of the radical Christian right. Attempting to restrict universal freedoms to select subsets of a national community is about self-righteousness, not what’s right.

To be clear, the violence perpetrated in the name of this video, or for any other reason, is utterly unjustified and unacceptable. And the filmmakers behind this film are not guilty of directly inciting such violence. Yet to ignore the role of provocation in uprisings such as these is not only to ignore basic facts but to dangerously abdicate any role we might play, as individuals or as a nation, in choosing to either enable such violence or end it. It is not impinging on free speech to suggest we use our speech wisely and with attention to its impact.

Incidentally, for those of you wondering about our other deeply held American values, such as freedom of religion, the far right applies exceptionalism there, too. They have been on a mission in recent years to cast the men who created a secular government that explicitly separates Church and State as deeply activist Christians who were mortified by Islam and would presumably be more so now. In other words, our values may be deeply held but they are not widely applied.

American extremists wear our nation’s values like body armor to protect themselves but wield America’s values like weapons when attacking their enemies. To any sane observer, such inequitable application of our nation’s traditions would seem as irresponsible as actively fanning the flames of anti-Islamic hatred while American lives and the lives of innocent people around the globe are clearly at stake. But the far right in America increasingly views itself as a nation unto itself, a chosen few within a chosen nation, able to rationalize all sorts of hatred and ugliness while condemning the same behaviors in others — which is dangerously akin to a holy war, not one that the American right is fighting against but actually starting themselves.