Paying for sex -- and love 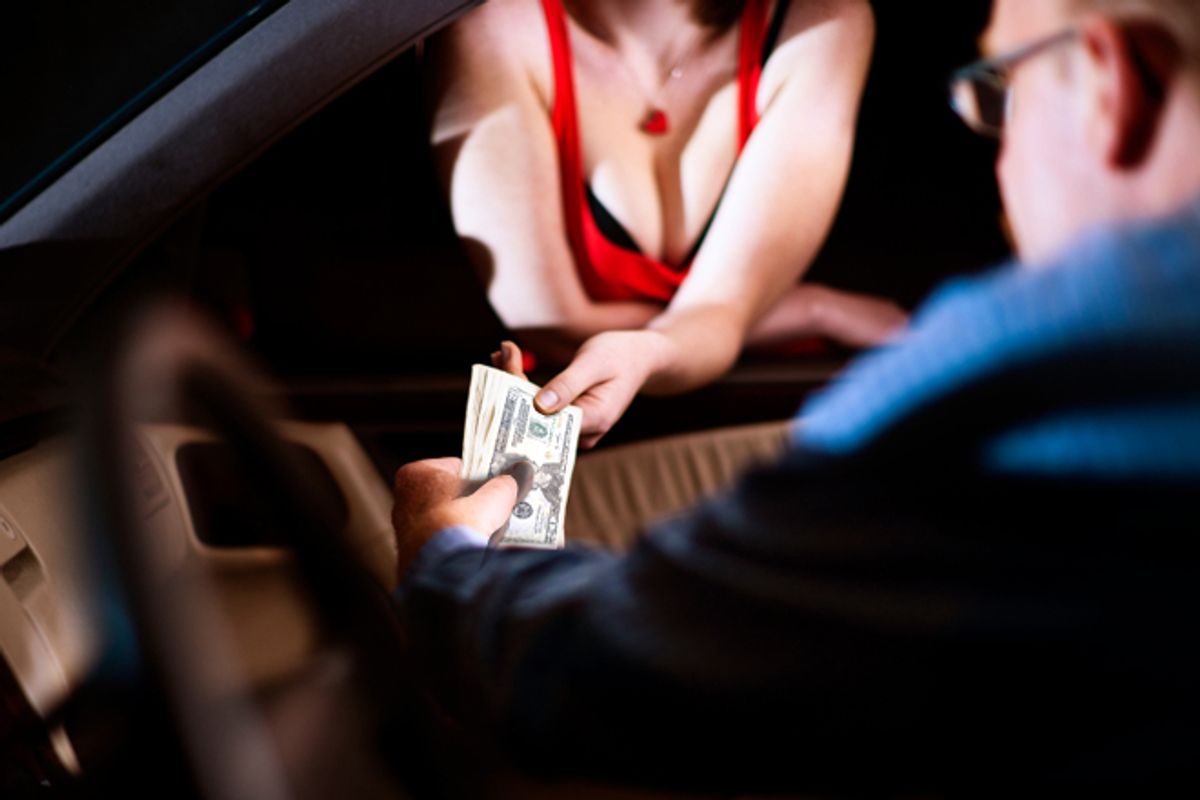 They're rich, married, middle-aged -- and they pay for sex. But they aren't looking for taboo sex they can't get at home: These men want an emotional connection.

But the findings, even given these limitations, are fascinating -- take that most of these “hobbyists” are primarily concerned that a provider has “a happy and cheerful personality.” That’s why I decided to talk to Christine Milrod, a psychotherapist and one of the lead authors on the study, about the so-called Girlfriend Experience, in which sex workers provide the illusion of a more romantic, cash-free transaction -- and why these "hobbyists" are drawn to it.

So how would you summarize what you found in terms of what these hobbyists are looking for in sex-for-pay?

Well, the thing that struck me the most was the whole concept of the Girlfriend Experience, and the fact that the behaviors themselves really mirror conventional non-remunerative romantic relationships. Meaning, these men are not doing anything else they couldn’t be doing at home, they’re just bored with a non-paying partner. The behaviors, the kissing, the fact that they engage in penile-vaginal sex more often than fellatio, that’s really important, because most studies show, and I think it’s the perception in people’s minds, that, “Oh, well, they can’t get a blow job at home so they have to get it from someone else.” That’s not true for these men.

Of course, you also have to look at the men who answered. Clearly, it is not a representative sample. It would be really almost impossible to get a representative sample, because paying for sex or accepting money for sex is basically an illegal activity unless you go to the state of Nevada. This particular crowd, this group of men, for them, they don’t want it to be like a prostitution encounter, even though they’re paying for it. There’s some contradiction here: OK, you want a girlfriend, but at the same time you’re paying for it. How do you reconcile that in your mind? I think the way they have reconciled it is that these men feel that they are consorting with a woman who is in her sexual prime, who really wants to have sex, and isn’t just doing it for the money.

What is it that they want from the Girlfriend Experience?

Whether you like to hear it or not, and most people don’t like to hear it, this population are concerned a great deal about the emotion and very little about outlandish sexual acts. We had 80 percent of them say, “Oh yeah, I could marry someone who had been a former provider. Doesn’t bother me.” Forty percent of them said, “I’ve been in love with them” -- I mean, that’s almost half! Thirty percent reported having an “ATF,” an all-time favorite whom they saw exclusively.

Most of these respondents were married, right?

Over 66 percent were married. That’s a lot.

Did you learn anything about their relationships with their wives?

The only thing I asked was comparing their level of sexual interest to their partner's. They were saying they were much more interested than their partners -- that was like 60 percent of them said that.

But you have to look at the age of these men. The bulk of these men are from 50 to 69. That’s not to mention their average salary which was $141,510. Then comes the earth-shattering statistic that almost half of the respondents had a graduate degree. [More than] 84 percent of them were white. This is a whole different kind of crowd.

What’s interesting is when you look at who do they want, they want older providers. They don’t want girls, they want women. Over half of these guys want to see a woman between 26 and 35. And as far as preferred ethnicity, 85 percent of the respondents were white guys and 85 percent of them wanted white women.

You hit on this earlier where you were saying there’s this assumption that the women were enjoying themselves. Did they express much interest in the provider’s pleasure?

Another surprising thing was that you found “deep kissing with tongue” was actually a common experience. That goes against the popular wisdom that sex workers have a “no kissing” rule.

But you have to if you’re going to offer the Girlfriend Experience. The stats that we generally read about prostitution are almost always about street prostitution, because that’s where you get the numbers -- through HIV clinics, public health inventories, arrest records and all those “johns” schools.

How are these hobbyists different from the larger community of men who pay for sex?

Well, they’re richer, and they’re educated beyond belief. In terms of motive, most of these men said, “I like to be with a woman who really likes sex.” It’s really not rocket science: They want to be with the hot chick who wants them. They’re willing to pay for the illusion. And whoever is the best actress, I think that girl is going to be very busy and very wealthy.