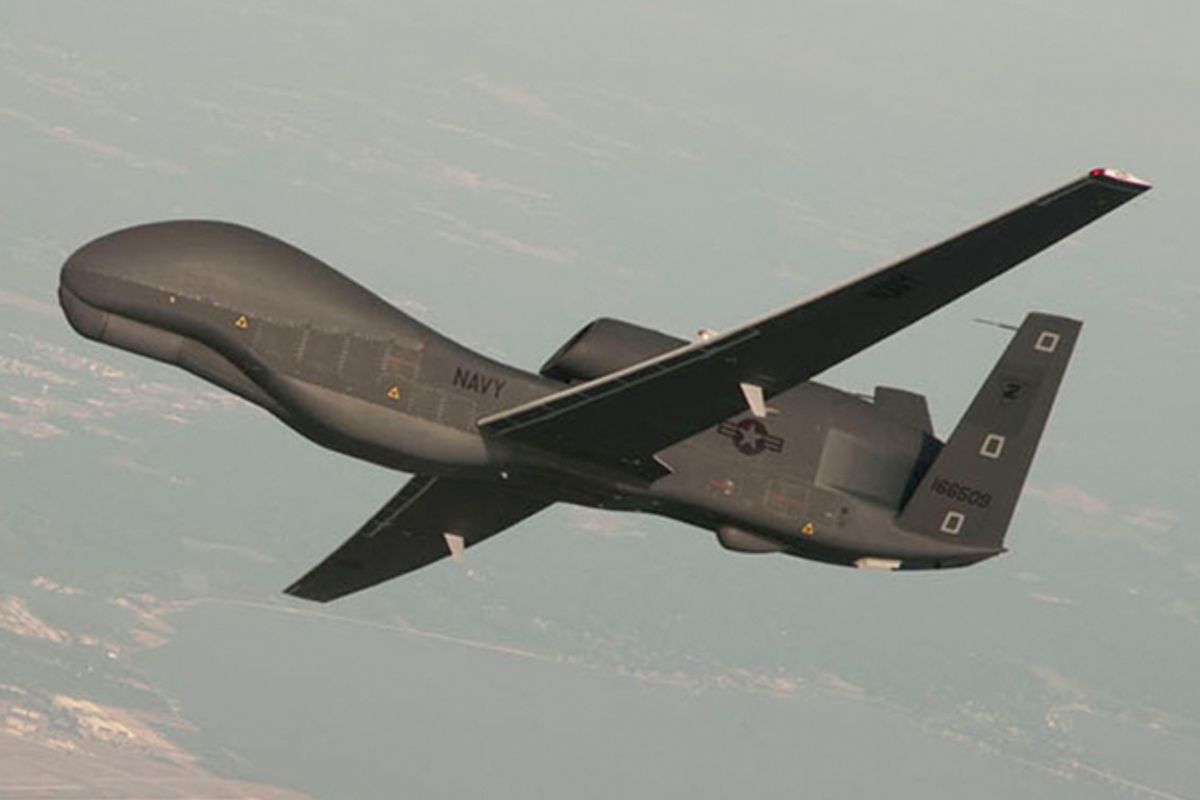 It was a beautiful thing to see, aircraft climbing, wheels up, wings pivoting back, the light, the streaked sky, three of four of us, not a word spoken.

We might be tempted to read this epigraph, taken from Don DeLillo’s short story “Hammer and Sickle,” as a testament to the sublimity of human aviation. In fact, this scene is conjured from the perspective of maximum-security prisoners who are on work detail, cleaning up the tarmac of an Air Force base while jet fighters thunder indifferently around them. Like so many of DeLillo’s descriptions of air travel, the ostensibly simple beauty of human flight just barely conceals a hideous underbelly.

Now we can imagine a similar scene wherein the aircraft themselves are “unmanned” or piloted by remote control. They might be drones. “Unmanned aerial vehicles” represent an increasingly contested nexus for public and secret discussions about airspace, privacy, police jurisdiction, and remote military targets. And they’re bleeding into everyday life.

In a recent New Yorker article on the private company AeroVironment, Nick Paumgarten surveys the many current experiments, speculative uses, and visionary futures of drones—from the deployment of a Predator drone to assist in a swat invasion of a ranch in North Dakota, to a “Tacocopter” that “theoretically delivers tacos to your door,” to the small-scale “Hummingbird,” crafted with enough verisimilitude so as to confuse actual trochilidae. In the very same issue of the New Yorker, a “Talk of the Town” piece centers on the duo who created the Occupy Wall Street drone, “a kind of four-pronged Frisbee that glides over Lower Manhattan, armed with a video camera, to keep tabs on the police.”

Far from being solely the domain of covert government operatives and paramilitary independent contractors, we find ourselves in an era of ubiquitous droning. The U.S. military was reported to have “some 7,000 aerial drones” as of mid-2011. But then, simply perform a search for “drone” on Amazon and behold the over 7,000 results, starting with a smattering of giddily advertised toy spy devices; or consider the May 27, 2012 cartoon strip in The New York Times by Brian McFadden, entitled “The Many Uses of Police Drones.” These comical (yet in many cases already existing) “many uses” include Backyard Inspections, Traffic Enforcement, Pedestrian Enforcement, Fashion Policing, Disenfranchising Voters, Stifling Dissent, and Fourth Amendment Circumvention. Drones are everywhere—literally (at least potentially), as well as throughout our cultural imagination.

Indeed, at one point in Nick Paumgarten’s New Yorker article he notes, “It will soon be technically feasible, if culturally unimaginable, to deploy passenger and cargo planes with empty cockpits.” Drones could transport us in the near future.

Yet a 2011 Fast Company article on concept aircraft designs, quite counter to its promising title—“NASA Reveals the Weird and Wonderful Commercial Airliners of 2025”—seems to reveal only that future jetliners will look basically like today’s aircraft. And the possibility of remote piloting is not mentioned once in this article as an option or prospect.

The current state of air travel has two sides. On the one hand, aircraft are being miniaturized and controlled remotely, reducing human error in-flight and opening up innumerable possibilities for military operations as well as ordinary people on the ground. At the same time, flight seems determined to reproduce itself more or less as it is, promising ever more hours of tedium and waiting between (and inside) large rooms cruising through space.

These two sides twist and become one where new media technologies enter the scene. Whether manipulating a Parrot AR. Drone Quadricopter (marketed as “Controlled by iPod touch, iPhone, iPad, and Android Devices”), checking in for a routine flight on one’s mobile phone, or dealing with labyrinthine realities of airport life (as one New York Times article put it: “After the Plane Gets You to the Airport, an App Comes in Handy”), mobile communications devices are increasingly called on for navigation purposes—to supplement, as it were, the human body in flight.

During a recent radio interview about airports on the program “To The Best of Our Knowledge,” I quipped that Facebook could potentially outpace airports as the ultimate hubs for people’s connections such that humans might stop flying altogether.

Throughout my research and writing about airports I have often wondered about the aura of exception that air travel evokes. I am continually puzzled by how, in an age of so many other technological advances over the past twenty years, airports have managed to retain their status as extraordinary places that demand a strange sort of seriousness and near piety. In a world where social networking can facilitate revolutions, and where connections happen as easily online as off, it seems inevitable that moving hundreds of bodies around in large vessels will go out of fashion.

It isn’t as though I truly believe that Facebook will become the 21st-century transit zone. It’s more that distinct aspects of airports — including high demand for entertainment, feelings of “dead time,” anxieties about contingencies — have anticipated and helped to pave the way for a host of newer experiences that are more about on-demand mediation and information (and capital) flows, and less about human bodies actually going places.

The human body is always in the picture, of course. There’s always an experienced plain, a phenomenal range—whether it’s a craggy mountain or a keyboard, a river eddy or an earbud. Human air travel will most likely be around for some time yet. But drones—particularly the nano-drones of the next generation—suggest that there is a critical convergence on the horizon, where remote sensing and screen culture might displace today’s commonplace demand for airbuses.

Ubiquitous droning calls attention to myriad landscapes of flight. It is sitting in front of a computer monitoring remote locations. It is distinguishing between birds and bots. It is a chorizo taco on its way, tracked on a screen in your palm. It is a speeding ticket that records you going too fast when (you thought) no one else was around. And it is also the bulky plane we still line up to get on, if only as a negative assessment rubric. As Major Michael L. Anderson, a doctoral student at the Wright-Patterson Air Force Base’s advanced navigation technology center, noted about the next generation of drones: “It’s impressive what they can do…compared to what our clumsy aircraft can do.”

I do not know the future of drones. I’m not sure how they will transform commercial air travel, how they will affect that everyday experience that we can’t yet quite imagine will be any different from how it currently exists. But I suspect that drones will continue to borrow from—perhaps eventually to replace—the sensations and expectations that are uniquely found during air travel.

Another DeLillo passage, this one from "Underworld," is suggestive of this line of inquiry:

There was a noise that started, a worldly hum—you began to hear it when you left your carpeted house and rode out to the airport. He wanted something friendly to read in the single sustained drone that marks every mile in a business traveler’s day.

This passage is about a character’s choice of airport reading, yet the “single sustained drone” is an uncanny instance of prescience. It portends the proliferation of these so-named devices that promise both constant war and its obverse side: the banality of military-grade existence.

The historical, mutually constitutive conjunctions of military and civilian aviation have been well documented and accounted for. What we need next are subtle analyses of how the most quotidian new media practices and ordinary travel experiences are co-shaping one another, and perhaps mutating at scales that go far beyond the human in both directions.

Looking out a window seat at 37,000 feet; zooming way out with Google Earth; seeing the world through the camera eye of a Hummingbird drone—these sorts of experiences de-center the human being, even as they imply human control. They communicate that humans are merely one species migrating around merely one planet in a vast universe. And they are also about the levels ‘below’: the informational, computational, entomological, bacteriological, elemental. These are other versions of the “worldly hum,” to use DeLillo’s phrase, that air travel brings into the foreground—a resonance being made all the more acute by the presence of ubiquitous droning.