After the oil spill 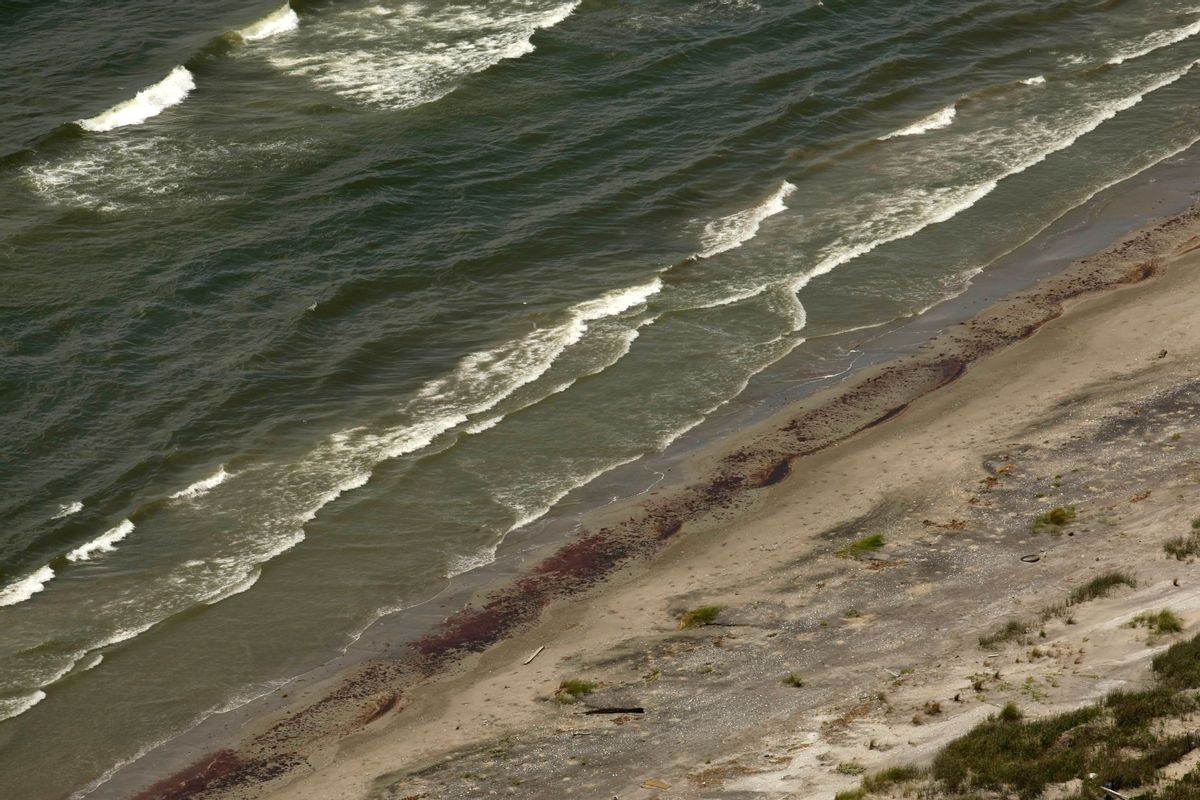 It was as if God had decided to put to the test every capacity for surprise and was keeping the inhabitants of Macondo in a permanent alternation between excitement and disappointment, doubt and revelation, to such an extreme that no one knew for certain where the limits of reality lay.

In Cocodrie, Louisiana, the boats appear more solidly built than the homes, perhaps because the houses all rest on stilts to avoid being washed away by storm surges. The land here fades into the murky waters of the Mississippi River's delta, with no clear end until suddenly you are out of the marsh grass-lined channels and into the darker blue waters of the Gulf of Mexico. The boats are more solid for a reason: fishing. Terrebonne Parish, which encompasses Cocodrie and many other towns like it, hauls in roughly 20 percent of Louisiana's seafood catch, which, in turn, is the nation's largest.

That seafood bounty relies on a vast wetland estuary that has been slowly but surely turned into the largest oil and gas complex on the planet over the last century. All in service of the American high-octane lifestyle, which encompasses everything from hurtling around inside large chunks of steel to eating seafood dragged out of the sea by diesel power.

The American fondness for both oil and shrimp came into direct conflict in April of 2010 when, as you may recall, oil giant BP suffered a massive blowout at its aptly named Macondo well in the Gulf of Mexico, sinking the Deepwater Horizon drilling rig and killing eleven workers. Was it a case of ignorance, the naming of that well, a random selection or dark humor? To be sure, after the spill began, nobody knew where the “limits of reality lay.” Days turned to weeks, and weeks turned to months, and the leak on the seafloor could not be capped. All told, five million barrels spewed into the Gulf — or less oil than runs off the nation's parking lots after rainstorms each year.

Naturally, books have been written to plumb the depths of BP's catastrophe, if not so much the ever-deepening oil addiction — in the memorable words of oil-man turned President, George W. Bush — that made it possible. Joel Achenbach's A Hole at the Bottom of the Sea, for example, explores why the damn hole was so hard to plug, as it mesmerizingly spewed oil day after day on a live Webcam. The simple answer is that we have reached the end of easy oil. We are now, quite literally, in uncharted waters when it comes to searching for petroleum, our addiction (and environmental prohibitions) driving us farther offshore and into deeper and deeper seas.

The Macondo well lay nearly a mile beneath the surface of the Gulf of Mexico, and spewed more than 50,000 barrels a day into the deep sea from leaks in its 450-ton "blowout preventer," which signally failed to prevent the blowout. Pressures and temperatures at that depth meant no human could ever approach the well directly, instead relying on the clumsy ministrations of robot submarines to attempt various patches and fixes. For all its accessibility, Macondo may as well have been on the moon. "The paramount rule of Macondo," Achenbach writes, is "nothing goes right."

It took American know-how to show the world how to use petroleum, first to save the whales by replacing blubber as a lighting fuel and then to power the Age of the Automobile that is still ongoing as the world races toward 2 billion cars. But our massive oil habit requires a lot to go right to provide humanity with 87 million barrels of oil per day, which is perhaps the enduring font of petroleum's essential mystery. The substance itself, a toxic stew of hydrocarbons first used to caulk boats and provide eternal flames for worship, is unrecognizable to most of the Americans who rely on it to power their lives.

Everything about oil remains, mostly, magical: how it is "produced" from wells that burrow miles into Earth's crust, or "cracked" into everything from jet fuel to the precursors of plastics and medicines. A million years of geologic stewing is required to cook fossilized algae into petroleum and yet we use a barrel of this substance worldwide each and every second. Perhaps most telling in this consumer-savvy age is how little we understand what exactly controls the price of this lifeblood of modernity, though most of us see the derivative of that price on gas station signage everywhere — the precision of that number a taunting reminder of our cluelessness.

Without oil, life as we know it is impossible. With oil, life as we know it is impossible. Even as oil remains a blessing, it is also becoming more and more of a curse, whether destroying lives in far-flung places like Siberia or the Niger Delta or filling the air we breathe with more and more heat-trapping carbon dioxide. Oil, in short, is an essential conundrum of our lives. “'That's some catch, that Catch-22,'” Captain John Yossarian marvels in Joseph Heller’s classic — a work whose persistent relevance with respect to war (and other modern absurdities) I never fail to marvel at myself.

In The End of Energy, Michael Graetz writes :

"However acutely aware we may be of the price per gallon we pay, we take it as something close to a right of citizenship that when we drive an automobile up to one of the more than 100,000 gas stations in the U.S., there will be fuel for our cars and trucks in the tanks beneath the asphalt. Without gasoline, the country would not run, and so there is gasoline, and barring extraordinary circumstances, there is plenty of it."

As today's Scarlett O'Hara would put it, when forced to stick an ATM card into a gas pump and watch the dollars whiz by: "I can't think about that now. If I do, I'll go crazy. I'll think about that tomorrow." Only we never do, Scarlet. We never do.

During my visit to coastal Lousiana in the wake of BP's man-made disaster, the locals joked that they put copious amounts of Tabasco on the seafood to hide the taste of the petroleum. Fine by me: I scarfed shrimp gumbo by the plateful with a generous splashing of various hot sauces. I still don't know what fresh petroleum tastes like, though I may get another chance to consume it in Nigeria or Russia one of these days. Of course, in some sense, we all know the taste of oil given how much of it goes into producing nearly every calorie we consume.

The forces driving the oil conundrum are at once seemingly omnipotent and entirely, disappointingly human. At the time of the BP spill, the irony of the Macondo rig’s naming was so obvious that even television news sources could not help but make, gasp, a literary reference. The idea of Garcia Marquez’s cursed town was easy to latch on to, but it should not be forgotten that the Macondo of One Hundred Years of Solitude is not simply a place cursed by God, as a few commentators pointed out, but a town afflicted by the ambitions of man and corruptions of government.

And so I find myself in places like Cocodrie, standing at the southern limit of North America, nursing a beer, watching the land melt into the sea under the stars and wondering where the "dead zone" created by algae blooms powered with fertilizer washed off Midwestern fields begins. Or what oil might taste like, whether it has seeped into the marshy ground on which I am standing and, if so, how long it will be trapped there. There are algae born and dying this minute that will provide hydrocarbons for the fools of the future. Such is the life of a reporter in the Anthropocene.

In the end, the addition of a second blowout preventer on top of the blowout preventer that had failed to prevent a blowout sealed BP's Macondo well. But the risk of such accidents only continues to rise as we sink deeper and deeper into oil addiction. William Freudenberg and Robert Gramling's Blowout in the Gulf tries to explain what led to that addiction — and what enabled BP's blowout — as well as to suggest what might break that bad habit, and free us from such human and environmental disasters. But "our capacity to do damage,” they write, “[…] may well have risen faster than our capacity to undo the damage.”

The remnants of the oil that spewed for 86 days can still be found in the Louisiana marshes from Bay Jimmy to Elmer's Island. Hurricane Isaac may have stirred up memories by pounding New Orleans on the seven year anniversary of the day Hurricane Katrina drowned the Big Easy, but the tropical cyclone literally stirred up BP's blowout in the Gulf of Mexico — knocking loose weathered tarballs hiding in marshlands and bringing them ashore again on the beaches so laboriously cleaned. For good measure, Isaac also finally washed away the berms once built to stop the oily tide.

Chronicling the Anthropocene offers that kind of job security. The work will literally never be done. After all, "Catch-22 says they have a right to do anything we can't stop them from doing," as Heller wrote. I won't pretend the reporting doesn't come with its own environmental sins: CO2 injected directly into the stratosphere by flights criss-crossing the globe, coal burned to feed the server farms that keep these musings online, the fractured habitats required to bring me crappy, late-night hotel food, in addition to all that oil. I justify all this with the rationalization that I am educating and enlightening, helping to change minds and behaviors, maybe even playing a small role in ensuring a long-lasting and relatively benign Anthropocene, a new age that finds new sources of power other than the corpses of ancient algae or plants. In the end, that may just be another story, one I (mostly) tell myself. Why don't you tell me?