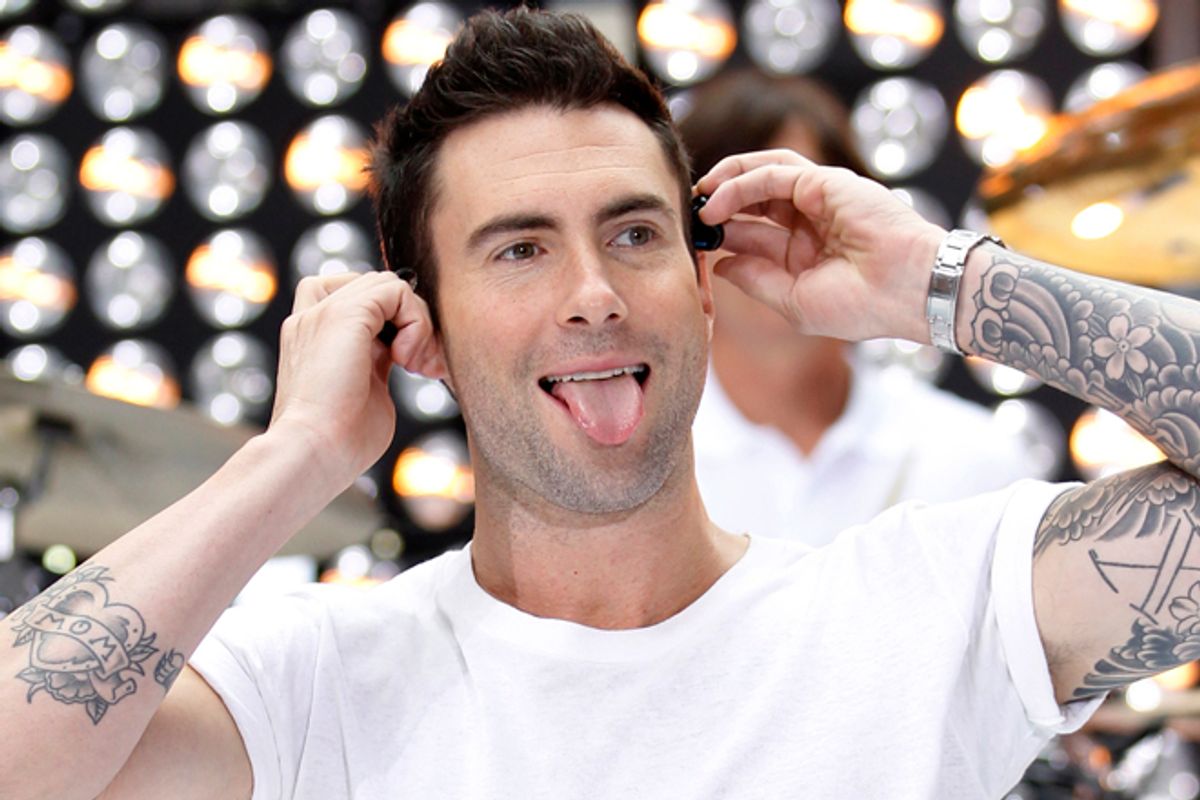 Of the four judges or celebrity contestants or coaches -- or whatever you call them -- on “The Voice,” Adam Levine is the worst vocalist. Blake Shelton’s voice is sturdy and dependable like an old pickup truck. Christina Aguilera has strong, ostentatious pipes. And Cee Lo Green has proved his vocal chops on solo albums like “Cee Lo Green… Is the Soul Machine” and even the weirdly overlooked “The Lady Killer.”

But Levine, who also fronts Maroon 5 -- so he represents “rock” on "The Voice," which returns tonight on NBC -- doesn’t possess a whole lot of physical or interpretive range. He tends to linger in the mid-range, although on slower songs he does try to hit higher notes, which only reveals his limitations. Lately, he has been favoring AutoTune, but to his credit, that’s more an interesting aesthetic device than a shortcut corrective measure.

That said — and Cee Lo’s freak charisma aside — Levine may actually be the best singer of the lot. He may sound like Al Green with an undiagnosed respiratory infection, but he does much more with much less. Sure, it’s ironic that he’s judging “The Voice” (which recently began its second season of not being a kingmaker like the faltering “American Idol”), since it’s doubtful he’d get very far on any of these shows as an actual contestant. Levine doesn’t have the chops that style of pop music demands, but that’s just one of the things that makes him and Maroon 5 interesting. That they’ve managed to become one of the biggest rock bands in the country is not unlikely. But somehow it is refreshing considering the alternatives: Chad Kroeger is back in the news and even Hoobastank has a new album out.

It certainly helps that Maroon 5 are just as interested in R&B as they are in rock 'n' roll, which makes his casting as the “rock” guy on “The Voice” seem like unimaginative typecasting. The band’s facility for melding pop hooks with R&B production certainly distinguishes them from other major-label acts, but perhaps more intriguingly, they treat both as avenues to and from sex. Levine — impossibly — manages to convey what might be described as a slinky sensuality that defies the concerns of the mainstream, the limitations of Maroon 5, and all logic everywhere.

When he’s crooning come-ons, his voice lends the music a satisfying lewdness, a sense of sticky physicality that gives his snaky hooks a pheromonal urgency. “Overexposed,” their fourth studio album, begins with the romantic recriminations and pop-reggae beats of “One More Night,” but the relationship drama is much less interesting than the way Levine slides around those syncopated beats with sly, comfortable fluidity: “Got you stuck on my body, on my body like a tattoo / And now I’m feeling stupid, feeling stupid crawling back to you.”

Must we point out who Levine is not? He is no Barry White, who had a God-given voice like a velvet airplane. Nor is he another Al Green, who could navigate even the trickiest melodies without breaking eye contact with his listener. He’s no Prince, but who possibly could climb that particular mountain? Levine’s not even R. Kelly, whose superlatively smooth vocals ramp up into weirdness that the concept of — just to grab a random example out of the air — a “sexosaurus” sounds like something Kinsey might have scribbled notes about.

But Maroon 5 are incorporating lessons from these artists rather than borrowing Eddie Vedder or Death Cab for Cutie's Ben Gibbard. For them, AOR&B is less an opportunity for confession (although there is much of that in their music); instead, they’re at their best when they’re documenting the excitement of seduction. Levine sounds no more engaged than when he’s under a woman’s power, which makes “Lucky Strike” arguably the best moment on “Overexposed.” He’s not doing the seducing; instead, he’s sexually dumbstruck: “And I can’t wait another minute,” he admits. “I can’t take the look she’s giving.” As an evocation of sexual submission, well, it’s got more craft and insight than “Fifty Shades of Gray,” and is all the more impressive for switching the genders.

The fact is, Levine may be professionally handsome but he’s no natural seducer. There’s no velvet in his vocals, only an adenoidal grain that portrays him as an average Joe who knows he has to work a little harder to get a woman to look twice at him, let alone join him in a compromising position. He’s no Pick-Up Artist exorcising his own powerlessness via sexual power plays. He's on "The Voice," not "The Game." He’s invested in the act of sex — in being rocked all night, in having hands on a body — which lends Levine's music a certain immediacy that belies the slick, occasionally overworked production.

Traditionally critics react to Maroon 5 with a stifled yawn, if they react at all. But at their best, Maroon 5 can be just as compelling as indie R&B acts like How to Dress Well and the Weeknd, up-and-coming acts who tend to emphasize atmosphere over grit. But that’s at their best, and Maroon 5 aren’t always at their best. When the band formed around the turn of the century, they weren’t exactly sure how to fully integrate their various genre interests, so on their 2002 debut, “Songs About Jane,” they came across like just another post-alt rock act, albeit one with a greater emphasis on rhythm and a drummer who actually got a vote. The hook on “This Love” landed it in radio playlists, but too often the songwriting sounded waterlogged, as Levine sang about the kind of idealized women who only exist in crappy rock. Jane could been Train’s “Meet Virginia” or Plain White Ts’ “Delilah” or every woman Adam Duritz has sung about ever.

But Maroon 5 are one of the few bands that grew more adventurous and weirder as they became more popular and professional. Starting around the time Levine showed up on albums by Kanye West and Handsome Boy Modeling School, he gradually indulged his R&B jones. “Moves Like Jagger,” a single appended to the band’s 2010 album “Hands All Over,” may be Maroon 5’s pinnacle, with its “Young Folk” whistling theme, porno soundtrack guitars, and its casual cockiness: “Look into my eyes and I’ll own you,” Levine declares, “with my moves like Jagger, I got the moves like Jagger.” By sharp contrast, the broodingly acoustic “Come Away to the Water,” their contribution with Rozzi Crane to the “Hunger Games” soundtrack, shows their considerable range, not only conveying a subtle menace but also revealing Levine to be a pretty sensitive duet partner.

“Overexposed” can’t replicate the moodiness of “Water” or the cocksmanship of “Jagger,” but it’s a decent follow-up with a raft of charting singles, middling reviews, and a sense of being undervalued and overlooked. The title is too clever by half and the album cover looks like they lost a bet, but there’s plenty of great moments here, from the “Xanadu” synth cascades of “Doin’ Dirt” to technological disillusionment of first single “Payphone”: “All those fairytales are full of shit / one more fucking love song I'll be sick.” The obvious question is, Who uses a payphone these days? But a more interesting question would be, Is that a Taylor Swift slam?

As an album, however, “Overexposed” will likely go down in history as minor 5, due to the band’s reliance on those big rousing choruses that not even originators like Coldplay do very well anymore, and on Levine’s insistence on peppering the tracklist with slower numbers. He’s no natural balladeer, with a fairly mundane solemnity and a gravity that undercuts the lasciviousness of the faster tracks. In that regard, “Sad” is far and away the weakest track, “not least because the chorus goes, “I’m sad, so sad.”

It’s likely that Maroon 5 will go their entire career without making a “Kid A” or a “Sign o’ the Times” or even a “Some Nights,” but who cares? Their survival throughout the 2000s has depended more on inventive and exuberant singles than on statement albums. They were a perfect band for radio, but now they’re becoming perfect for iPods and playlists, making them one of the few bands to navigate the tricky transition from the CD era to the digital age. They’d make for a killer greatest hits collection, if that format didn’t seem so tied to physical media. Of course, you’d have to skip the first five or six songs, but the rest would be a crash course in how to make a limited instrument sound almost limitless.