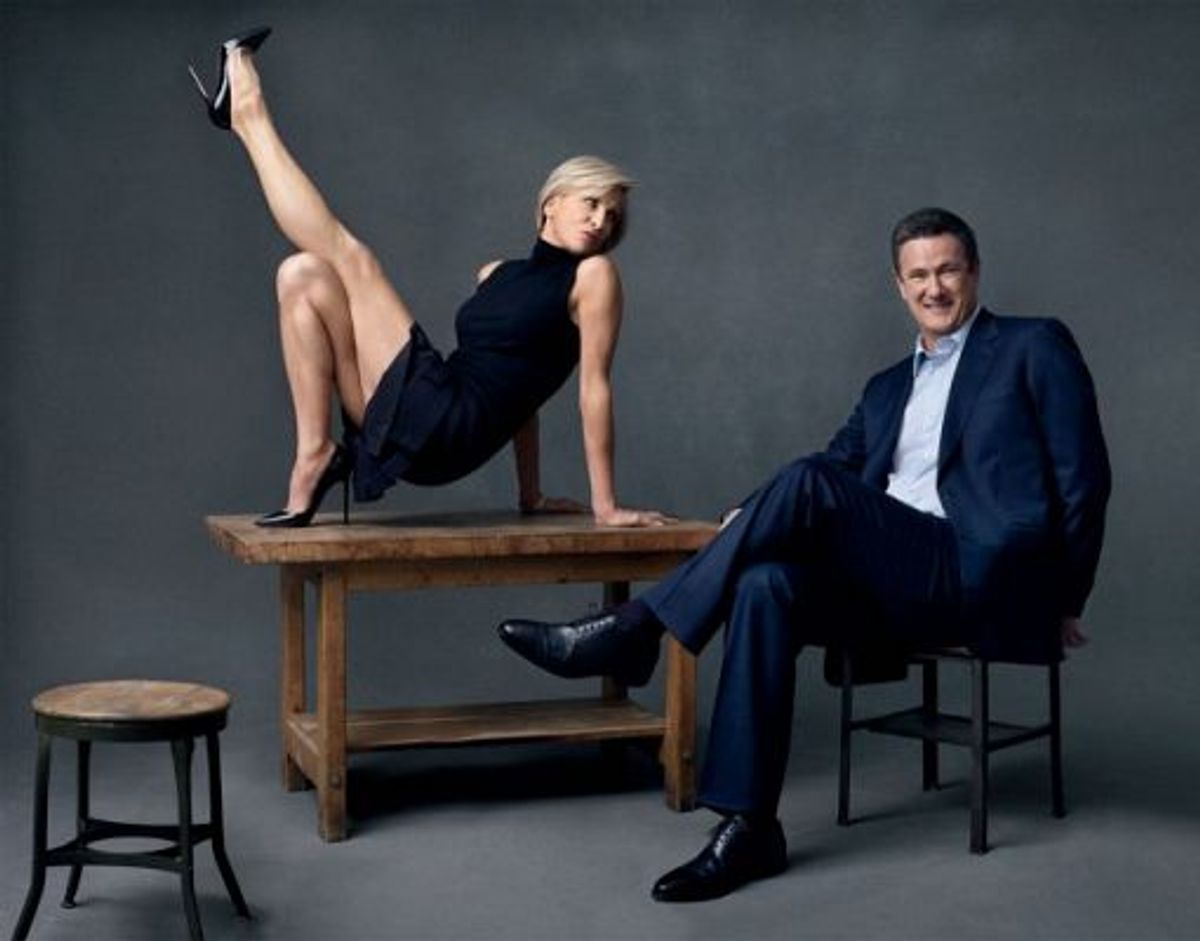 Vanity Fair’s short profile of MSNBC’s Morning Joe hosts Mika Brzezinski and Joe Scarborough ostensibly depicts them as a dynamic duo reminiscent of the great screwball comedies of the 1940s (the article references The Thin Man’s Nick and Nora). But the sassy journalist heroines popularized by Rosalind Russell and Katharine Hepburn would have balked at a photo shoot like this one—which is both reflective of current attitudes toward professional and political women and jarringly anachronistic. The notion that women exist primarily for men’s amusement (both on and off the job) seems oh so Mad Men, yet the trend toward depicting public women (especially those whose jobs place them in the realm of politics) primarily as sex objects is alive and well in the 21st century. The pornification of political culture (a process in which some women participate willingly and others have foisted upon them after their image is conscripted) has depicted political candidates (e.g., Sarah Palin and Janice Hahn) and women voters (in viral videos like this one and this one from the 2008 campaign) as strippers.

Looks like it’s Mika’s turn. Not a stripper, you say? Well, what else do we call women who dance on tables for men’s spectatorial enjoyment? Although the brief article that accompanies this picture emphasizes both Scarborough’s and Brzezinski’s various flirtations (with each other, Roger Ailes, and—in Scarborough’s case—the American electorate), the image tells the familiar story of a man who commands the attention of others and a woman who seeks only the attention of that man.

Gaze plays an important role in this visual narrative. Just as Scarborough is identified as the dominant persona on the show that bears his moniker (he’s identified as the “host,” whereas Brzezinski is the “co-host”), his gaze is turned outward while Brzezinski’s focuses exclusively on him. Rather than sitting parallel to Scarborough, Brzezinski is placed on a table—the empty chair underscoring her status as an accessory.

When women accessorize men in this fashion, it diminishes women’s credibility while simultaneously bolstering men’s heterosexual virility and strength. It’s important to note that in addition to playing up the alleged sexual tension between Scarborough and Brzezinski, the Vanity Fair piece announces Scarborough’s potential presidential aspirations. Should he worry that a picture like this one might make him look less presidential? Sadly, no. U.S. presidentiality is so thoroughly masculinized, we’ve become accustomed to seeing our presidents surrounded by women playing supporting roles, whose presence complements men’s performances as Patriarch-in-Chief. That’s one of the reasons women candidates have trouble being perceived as authentically presidential. Conversely, should Brzezinski harbor political or professional aspirations that contradict this narrative, the image would be a significant liability.