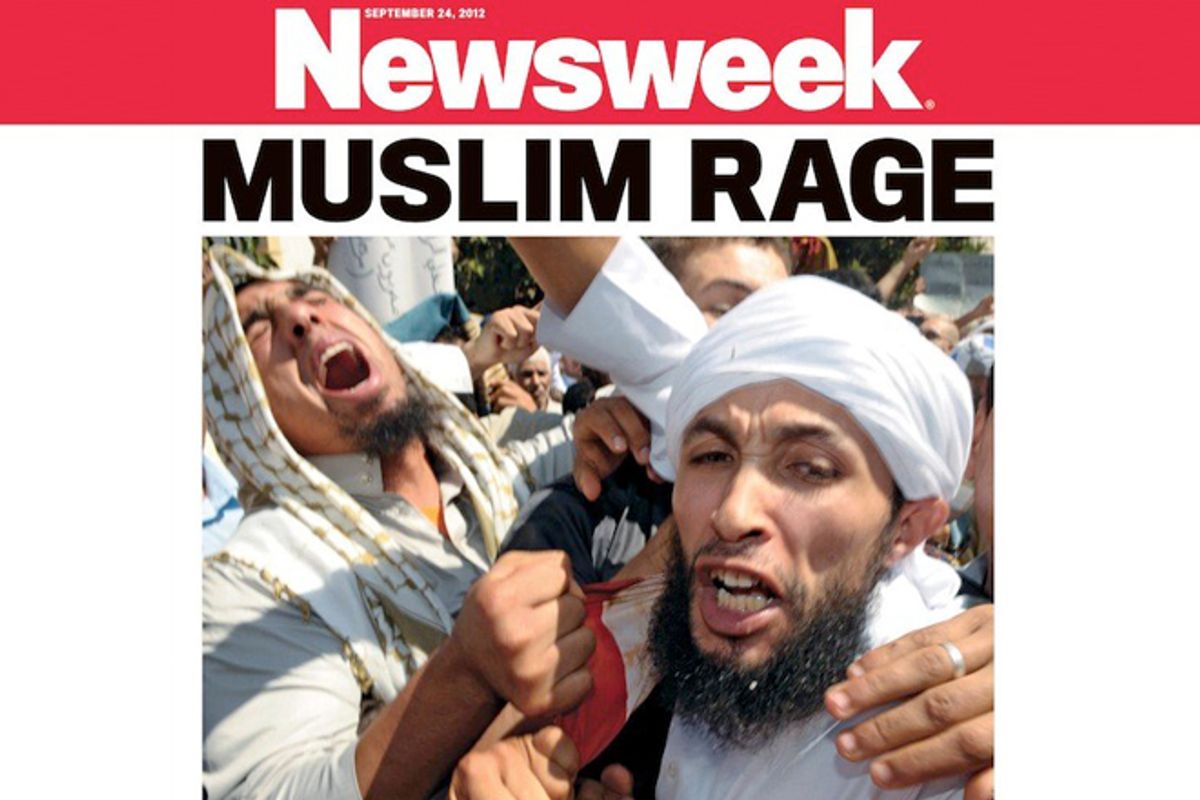 Look, we all know Tina Brown, editor of Newsweek, is simply trolling us, because trolling is the only way for a weekly newsmagazine to get any sort of attention anymore. (Time doesn't troll us, and as a result no one ever talks about Time.) So, MUSLIM RAGE.

As pure trolling, this is in a way less egregious than the "What if Princess Di Were Still Alive" fanfic of last year, because this one does at least have a news "hook." There are protests and stuff going on! This is related to the "news" of the "week." But it's also a much more dickish and counterproductive bit of trolling, because it is shamelessly exploiting a sensitive situation with idiotic "provocative" fear-mongering.

Hey, do you know what would've been super-helpful here? A cover that promised to like explain what is going on with these embassy protests, instead of one that just shouted MUSLIM RAGE. Maybe, like, a history of and explication of the beliefs of the Salifist movements currently behind most of the protests? And some notes on the political scenes in the various countries where protests have taken place? Oh, wait, looks like Time already wrote this story? What a useful primer on the factions of the region and the motives of the players involved! And no stupid bloggers paid any attention, at all. POINT: TINA.

This Newsweek cover story, on the other hand, is worse than useless when it comes to understanding what the hell is actually going on in Egypt, Libya and the other sites of protest across the Arab world. It is ... about how Muslims are angry and liberals are stupid for not acknowledging that Muslims are angry. Like, it mentions the movie, and the attacks, but it's mostly focused on Salman Rushdie and the author of the story, Ayaan Hirsi Ali, an ex-Muslim who now writes pretty much exclusively about how horrible Muslims are.

Oh, and I am also confused about whether it's all Muslims who are RAGING or what, because first Ali says:

For a homicidal few in the Muslim world, life itself has less value than religious icons, such as the prophet or the Quran.

The Muslim men and women (and yes, there are plenty of women) who support—whether actively or passively—the idea that blasphemers deserve to suffer punishment are not a fringe group. On the contrary, they represent the mainstream of contemporary Islam.

So, it is "the mainstream"? And then she says:

Of course, there are many Muslims and ex-Muslims, in Libya, Egypt, and elsewhere, who unambiguously condemn not only the murders and riots, as well as the idea that dissenters from this mainstream should be punished. But they are marginalized and all too often indirectly held responsible for the very provocation.

Haha what? Held responsible by whom, people who write magazine articles blaming all Muslims for all acts of violence committed by Muslims, or ...?

Ayaan Hirsi Ali has an incredibly compelling personal story that evokes sympathy and respect from any feeling person, at least up until around the moment she meets Niall Ferguson at the Time 100 Party in 2009. (The two are now married. Yep: The two most aggravating Newsweek troll cover stories of the year were by one power couple!) But it's important to note that despite the "think tank" thing, and the books, she's not really any sort of expert on Islam or the history and politics of the Arab world or the various factions and philosophies currently fighting for supremacy in Muslim nations across the region. She's an atheist polemicist feminist, which is cool and all but has really nothing at all to do with what is currently going on in these countries where there is stuff going on.

Here is what happened: Tina and Sir Harold were having drinks with Ayaan Hirsi Ali and Niall Ferguson and Tina was like "oh you simply both must write for me" and Ferguson and Ali were like "yes we must" and all the actual journalists and editors at the magazine were like "ugggghhhhh."