What happened to Occupy?

A year after Zuccotti Park, participants discuss what it means 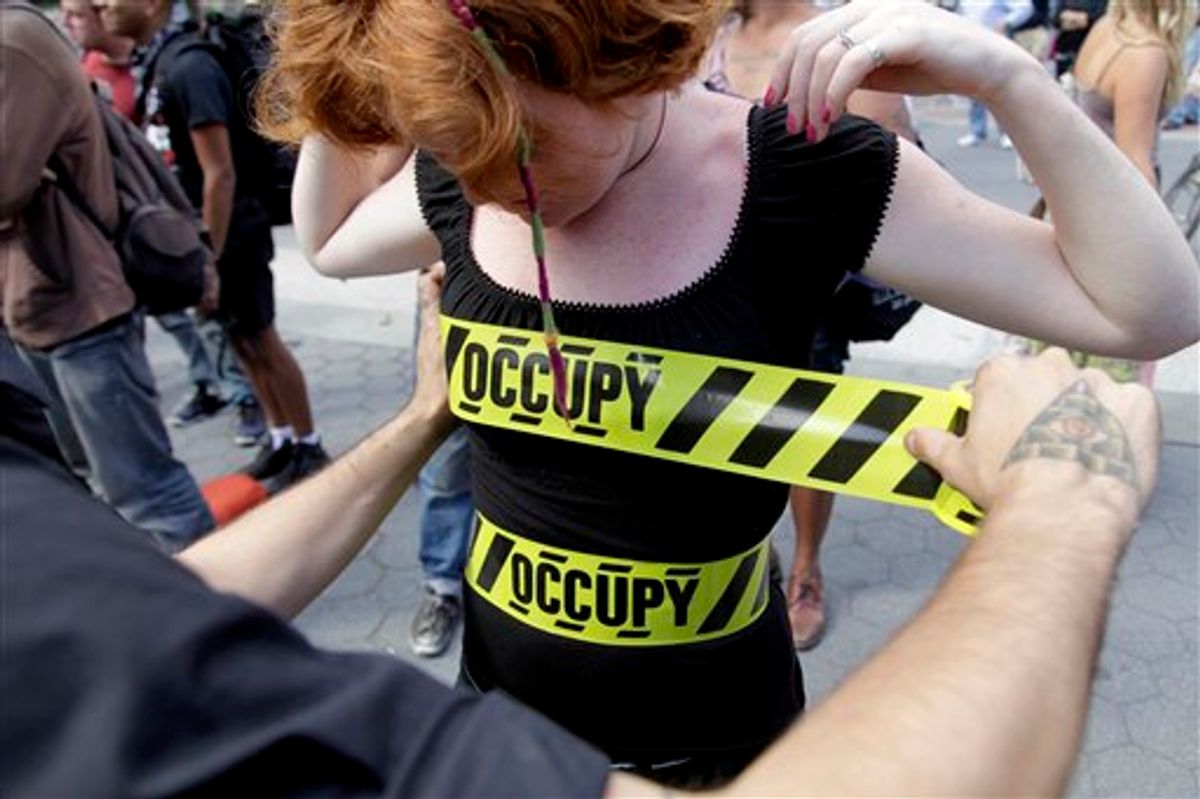 One year ago Monday, Occupy Wall Street inserted itself into Downtown Manhattan and the political landscape. In this election year, “Occupy” has almost completely disappeared from headlines, even as its central issue of inequality has become an important part of the conversation. While thousands of Occupy supporters are expected to flood New York’s financial district to mark the “Occuversary,” with a day of civil disobedience and marching, it remains unclear what Occupy has or has not achieved. Indeed, what "Occupy" refers to is still an open question. Salon asked an assortment of Occupy stalwarts and commentators, “What has happened to Occupy?” [Responses have been edited for space and clarity].

There are many necessarily speculative answers, some more persuasive than others. One that I find persuasive is that Occupy's slowdown was inevitable, since, as Asad Haider wrote in Viewpoint magazine, "Nobody actually knows how a movement can grow and develop today." Occupy has emerged in an era when the paradigm of union-centered mass movements — and the economic conditions that underpinned them — are long dead. No new paradigm has taken its place, so Occupy is necessarily groping in the dark.

One of the refrains I keep hearing is this: "After this year I know the people I'll be organizing with my whole life." A lot has been said about how the Occupy movement "changed" "the conversation," but what interests me more is what's to come from the networks of passionate people the movement helped to create. What interests me more than its past is its future — both under the name "Occupy" and otherwise.

It's through such networks, for instance, that a fracking well got shut down in Pennsylvania, a mountaintop removal mine got closed in West Virginia and there are bodies trying to block the construction of the Keystone XL pipeline in Texas. Occupy doesn't tend to get the credit, but without it there wouldn't be quite so many home liberations going on in the poorest parts of Chicago, or quite so many fewer stop-and-frisks in New York.

The most exciting direction Occupy is taking is that of a debt resistance movement. The global financial crisis was a debt crisis.  There is a global double standard when it comes to debt. People are expected to pay, while banks get away with billions. In the spirit of the indigenous movements of South America, the Arab Spring and the Anti-austerity movement in Europe we are saying, "Enough!" We do not owe and we will not pay.

There never was such a thing as Occupy. Anyone who tells you differently is probably some schmuck with a chapter in a book titled something like “Occupy and the Strategy of the 99% For Winning!” Sept. 17, 2011, was not a day after which "everything changed.” What happened last fall was amazing but it was part of a worldwide constellation of craziness that everyone reading this is at least mostly familiar with. So nothing "happened" to Occupy. A great deal many things happened to people, however. And these people have built wonderful new social relations and skills in anti-capitalist skulduggery that will carry us on through some craziness for years to come.

Occupy changed the national conversation on inequality and capitalism to the extent that the full force of the nation-state was turned against a few thousand campers. Who would have predicted that a tent was so subversive an object that its sale would be banned in many locations? Next it changed the national calendar by bringing together labor unions and immigrant groups to celebrate May Day together for the first time since the Cold War.

Since that day, Occupy has changed its internal conversation. Emerging from a series of horizontal assemblies in May, the Strike Debt campaign that will launch on Sept. 17 moves from convergence around the tactic of occupation to consensus around the politics of debt … The future is about building the possibility of openly declared debt refusal, or debt strike, following the lead of students in Quebec, consumers in Greece and the Catalan independence movement. Do not go quietly into austerity, join us.

Gideon Oliver, president of the New York chapter of the National Lawyers Guild:

In the context of the criminal penal system, at the start of Occupy Year 2, hundreds of arrestees are still running the marathon of bringing their criminal charges to resolution. Many of those arrested had never had substantial contact with the criminal penal system before their first Occupy arrest. Rather than emerging from the process as having been mere tourists in the system, many have come through as more actively engaged political beings whose capacity and practical options for solidarity and alliance work have increased.

At one point it seemed that Occupy was going to become the new umbrella term for radical activism, but what use is an umbrella if it's dwarfed in scale by a more focused protest? The Chicago Teachers Union strike here has both energized and reunified almost all the people who’ve been involved with Occupy Chicago, but I think it may also have made them think differently about how resistance can be simultaneously radical and populist, deeply rooted in local communities’ lives but also with huge national implications. Occupy was the spark, but the fire is just beginning, and may have another name.

Allison Kilkenny, blogger with the Nation and co-host of podcast Citizen Radio. Kilkenny reported on Occupy since its earliest days:

Occupy is still around, but it's a softer, friendlier version of its September 2011 self. To me, Occupy was exciting and revolutionary because it legitimately challenged the authority of officials to partition and limit the boundaries of public space and free speech. Those groundbreaking "anarchist" (I hate using that loaded word) aspects have sort of been watered down or forced out.

There was a lot of talk at the meetings for #S17 where Occupy leaders stressed the "non-threatening" aspects of the Wall Street protest. I know they mean "Don't throw a bottle through a Starbucks window, idiot" when they say "non-threatening," but it sounded very passive, and I think Occupy first captured attention because, in a sense, the movement was a legitimate threat -- not because its participants were/are violent, but because they refused to play by their oppressors' rules.

In Minneapolis we have brought the visionary ideas and bold direct action of Occupy from Wall Street to Main Street and the communities hardest hit by the financial crisis. This has produced victories for families, including my own, that defied all odds and showed that when we stand together we can win against even the biggest of enemies.

Malcolm Harris, editor at the New Inquiry. The prankster who brought crowds to Zuccotti Park with false rumors of a Radiohead concert, Harris also had information from his Twitter account handed over to the New York district attorney's office in a landmark privacy case:

Occupy has become a discourse or way of talking about both things that happen and how people feel. When we say "Occupy X," it's a half-joking way of claiming a right to take up space that doesn't already technically belong to you. I think the importance of having that frame for thought has so far been undervalued and will be increasingly important since none of the problems that produced Occupy have been resolved. As a movement it was never going to work because it wasn't a movement. As a tactic it has proven useful but not limitlessly so. As a way of understanding how people are able to change the world without asking for permission, I think we've only just seen the beginning.