Mitt Romney insults half the country 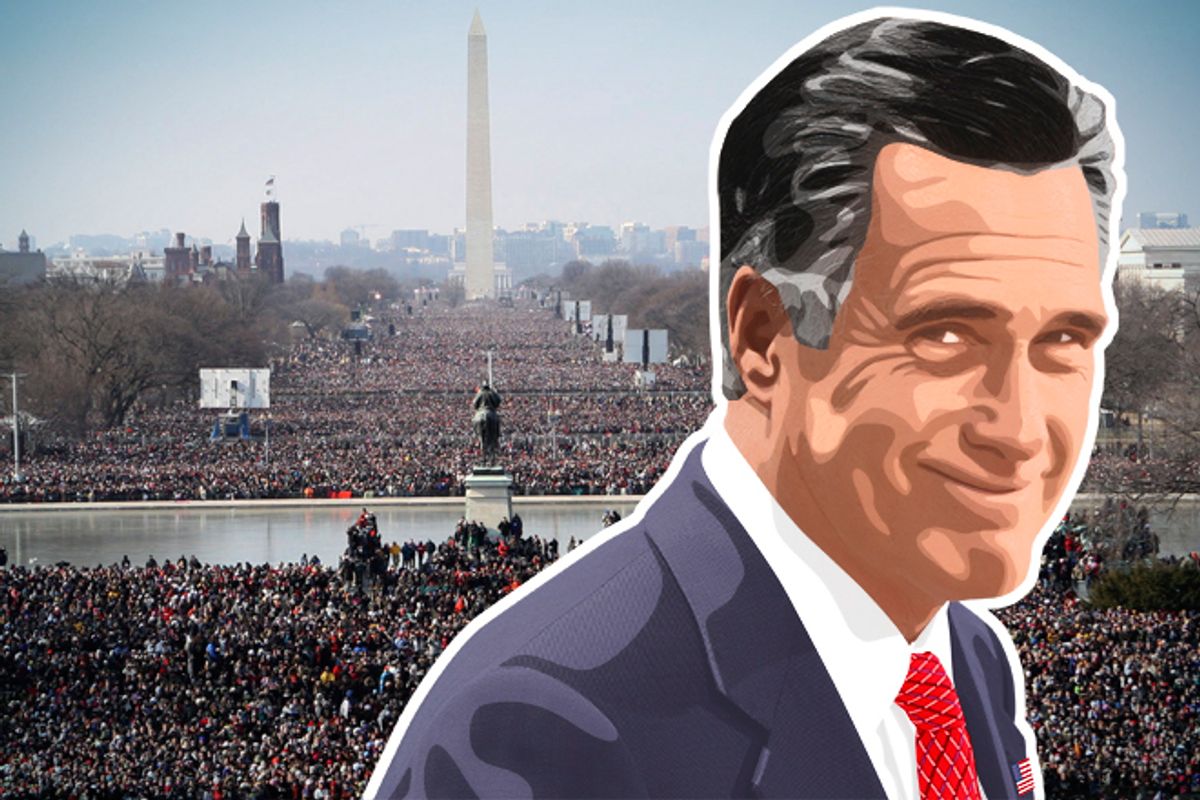 I admit it: I'm challenged to constantly come up with new superlatives to describe Mitt Romney's latest craven and/or self-destructive move on the campaign trail. The latest outrage: leaked video of Romney telling wealthy donors that 47 percent of Americans back President Obama because they are "'victims' who believe that government has the responsibility to care for them. Who believe that they are entitled to health care, to food, to housing, you name it. And they will vote for this president no matter what."

David Corn of Mother Jones obtained the video and verified its authenticity. The Romney campaign did too; its statement in response is so weak I'll get to it at the end of this post.

Here's the core of what Romney told his donors, in response to a question about how he can prevail over Obama:

There are 47 percent of the people who will vote for the president no matter what. All right, there are 47 percent who are with him, who are dependent upon government, who believe that they are victims, who believe the government has a responsibility to care for them, who believe that they are entitled to health care, to food, to housing, to you-name-it. That that's an entitlement. And the government should give it to them. And they will vote for this president no matter what … These are people who pay no income tax …. [M]y job is is not to worry about those people. I'll never convince them they should take personal responsibility and care for their lives.

I want to break down the cruelty and the inaccuracy of what Romney said. That 47 percent "who pay  no income tax" has become a core issue in the campaign for Republicans. But according to the Washington Post, of those Americans who don't pay federal income taxes, 29 percent pay payroll taxes, and almost a quarter are elderly. The most important point is: They all work, and most are eligible for a federal tax credit for low-wage earners that was a Republican idea, as an alternative to welfare. (This is my hobbyhorse and I won't ride it now, if you care you can read about it here and in my book.) Oh, and the U.S. military is apparently also counted in this number. Those parasites.

Second, obviously all 47 percent of Americans who pay no income tax are not voting for Barack Obama. Sadly, a lot of elderly white people and some of the white working class included in that 47 percent are the bedrock of the GOP base. Romney's been using the old racially coded GOP dog whistle of railing against "welfare" (and lying about it, too) but now that he's talking about the 47 percent of Americans who supposedly see themselves as "victims … entitled" to government support, he's talking about mainly white people. Particularly when he rails against the "dependent," Romney is talking about his older white base, which is dependent on Social Security and Medicare and doesn't want either program touched. But this is why Romney has had a hard time closing the deal with white working-class voters, and the video isn't going to help. He's an equal opportunity class warrior: He disdains everyone who is struggling.

There are a few other nuggets in the video that are getting lost in the rightful focus on Romney's contempt for half the country he wants to lead. Unbelievably, he claims he'd be doing better if he were Latino. Noting that his father was born in Mexico, Romney quips, "Had he been born of Mexican parents, I'd have a better shot of winning this," and adds "it would be helpful to be Latino" politically.  Romney also brags that "if we win on November 6… we'll see capital come back and we'll see — without actually doing anything — we'll actually get a boost in the economy." Did you get that? The economy will improve for Romney "without actually doing anything" because "capital" will come back. Enough said.

I admit that when I first heard of the video (before I saw it had been verified by Mother Jones) I thought it might be faked, so perfectly does it portray Romney as the man of the top 1 percent, contemptuous of the rest of us, David Axelrod's dream opponent. But it's for real. I trust Mother Jones, but if you don't, here's the wan statement released by Romney spokesperson Gail Gitcho:

Hey, Gail Gitcho? You're flat-out lying. You can't say Romney "is concerned about the growing number of people who are dependent on the federal government." Romney expressly said, "[M]y job is is not to worry about those people. I'll never convince them they should take personal responsibility and care for their lives." It's time to look for a new job, Gail.

By the way, RNC Chairman Reince Priebus says Romney was "on message" at the fundraiser. That's how you know it was hateful and self-destructive.

I talked about this on "Hardball" today, and inevitably Romney's statement was compared to Obama's own comments about "bitter" Pennsylvania voters "clinging" to their "guns and religion"  in 2008. I differ with my friend Chris Matthews about the meaning of what Obama said, and I've done so on the show: Although I understand why it damaged candidate Obama politically, I said at the time that if voters heard his full statement, there was almost nothing that they would disagree with: Pennsylvania's white working class had in fact been abandoned by the economy and to some extent by its party.

But even more important: Take issue with Obama's choice of words if you will. There is no denying that he told the story as an attempt to empathize with those voters, and to get his wealthy San Francisco crowd to move beyond their cosseted knee-jerk certainty that the only reason those voters were skeptical of Obama was that he was black. Romney's discussion wasn't an attempt at empathy, or an effort to get the rich to care about the poor: it was just piling on, playing to his crowd's prejudice and despicable self-love. People really have to stop comparing the two events.

Mitt Romney will never be president. I know, I'm repeating myself, but other people are starting to say the same thing. "Today, Mitt Romney lost the election," wrote Bloomberg View’s Josh Barro. Bush adviser Mark McKinnon said it was "potentially crippling." Potentially doesn't do it justice. You can't disdain half the country and be president. But what a lot of damage to the social fabric you can do in the meantime.

Update: Romney just talked to reporters about the video. Here's the gist of what he said:

Well, um, it's not elegantly stated, let me put it that way, I'm speaking off the cuff in response to a question....The president's approach is attractive to people who's not paying taxes, and therefore I'm  not as likely to draw them into my campaign as those in the middle.

And here's the "Hardball" video: