Are dumb questions the future of journalism? 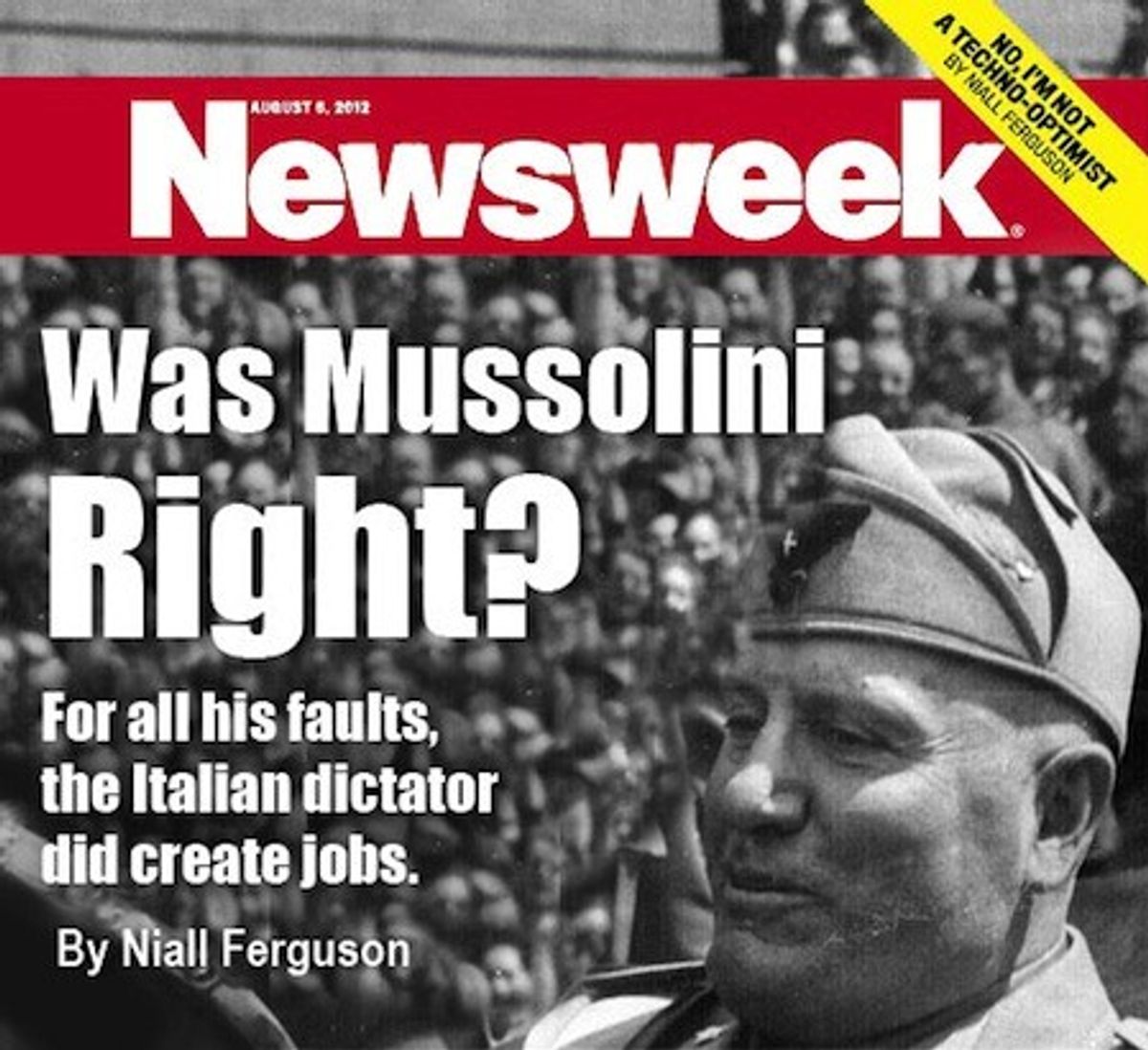 "He made the trains run on time," they said about Italian dictator Benito Mussolini, and it was more than just a cliché. It was a statement about a government that works, a government that means what it says and does what it wants. Sure, there were some problems with the treatment of dissidents. But some very smart political analysts are asking a question that would have been surprising just a few years ago: Is it time to give fascism another try?

To be clear, no one is proposing a Fourth Reich. This isn't about Germany in the 1930s, and it isn't about genocide. It's about fascism as an economic program, where the government stops being ashamed about merging with corporate interests. It's the ultimate pro-business position, and that's why the wonks proposing a new look at an old philosophy have a catchphrase sure to draw adherents: "Fascism means jobs." If they're right, it could remake the American political landscape over the next decade.

Our Future Is Underground

Global warming. Overpopulation straining food supplies. Rising seas and hurricanes. More and more, it seems like the planet is turning on humanity. For years, science fiction writers have told us that colonization of other planets is the answer. But the technical hurdles—particularly a lack of nearby M-class planets suitable for habitation—could make it impossible in the next few centuries. By the time we have the technology to evacuate, it might be too late.

The answer may be right under our feet. Rebecca Anderson's lab at MIT looks like any other, bristling with computers and assistants in lab coats. But the biologist has a radical idea: Let's move humanity underground. It won't be easy to convince people to give up their homes and live beneath the surface of the earth, but Anderson's convinced that it's the only place where we'll be safe from the climate's ravages. Over the next few thousand years, the brutal processes of natural selection will turn us into a species of hairless mole-people with night vision, perfectly suited to our new subterranean existence. "We already have the backhoes," Anderson says. "The next step is to start digging."

Was Feminism a Mistake?

It's 6 pm, and Marjorie Lungardner is hard at work. With her hair perfectly in place and her makeup precisely applied, she moves smoothly through her kitchen, checking on the casserole in the oven and slipping an olive in the martini on the counter. But the martini isn't for her. Her husband Jeffrey will be home soon, and everything needs to be just so.

Jeffrey and Marjorie don't have kids yet, but that doesn't mean Marjorie wants to work outside the home. Her job, she says, is supporting her husband and making him happy. "I just let Jeffrey make all the decisions. It makes me so happy." Millions of women like Marjorie are asking whether the last 40 years of struggle was really worth it, and whether everything wouldn't be a whole lot easier if they just let men run the world again.

Eric Fletcher didn't look for a job today. Or yesterday, or the day before that. Ask him why, and he'll tell you there aren't any jobs to be had. But Eric's father Albert tells a different story. "Don't get me wrong, we love Eric," he says. "But how many hours can you spend playing video games? We spent $150,000 on his education, and we're still paying. When's he going to move out?"

There are thousands of young people just like Eric, who have had a hard time adjusting to the world after college. But now some are asking whether the problem isn't the economy, but the young themselves. Their grandparents defeated the Nazis, and their parents fought for peace, love and civil rights. But today's young people aren't accomplishing much of anything. Could they be America's worst generation?