Does Paul Ryan regret his choice? 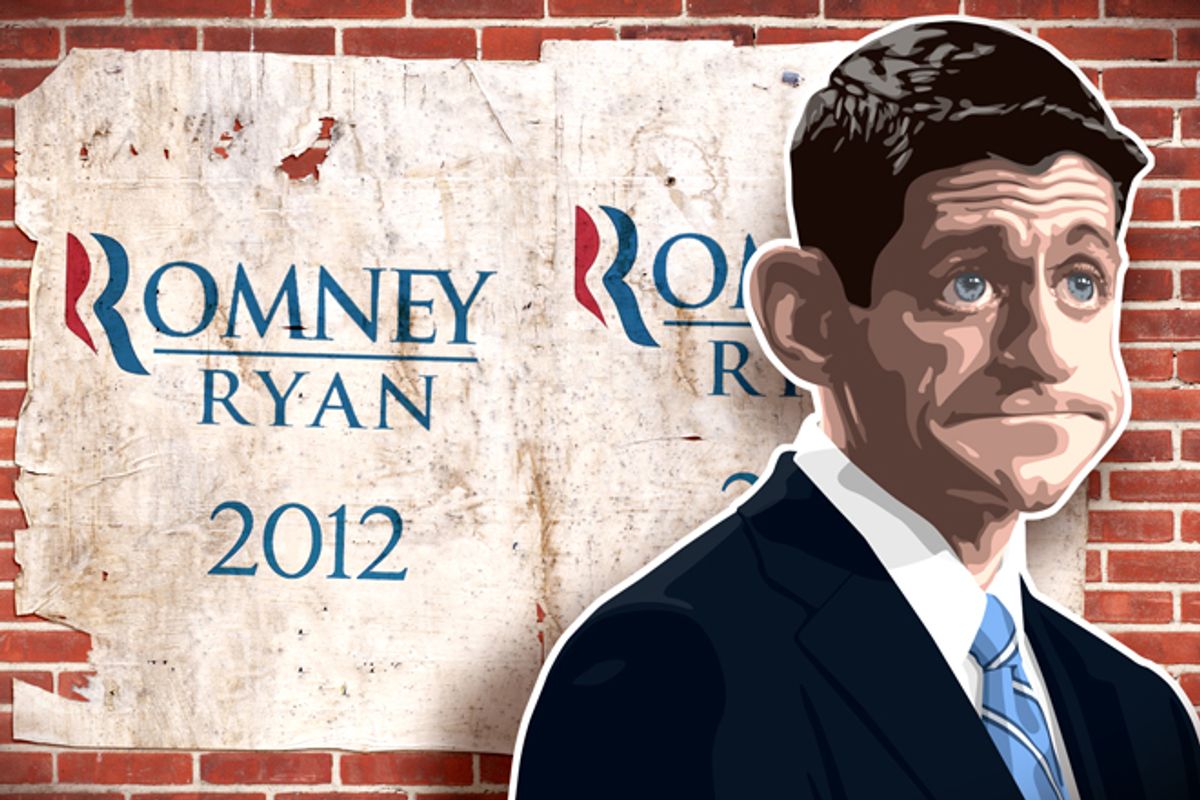 Paul Ryan didn't sound like Mr. Loyalty when commenting on Mitt Romney's cruel comments about the 47 percent of Americans who pay no taxes Tuesday to a Reno, Nev., television station.

The Associated Press has the story:

Asked what he thought of Romney's remarks, Ryan told the Nevada station: "He was obviously inarticulate in making this point." Ryan went on to say the point the Republicans are making is that, under the Obama economy, government dependency is up and economic stagnation is up.

Ryan added that if given the chance, “I think he would have said it differently, that’s for sure.”  And according to Think Progress, in an interview with a New Hampshire station, Ryan answered a flat "no" when asked if he agreed with Romney's remarks.

The would-be V.P. obviously thinks he does this whole riff a lot better, when he pits "the makers" vs. "the takers," making essentially the same point as Romney. But makers vs. takers sounds rather Ayn Randian and grandiose, whereas saying half the country thinks of themselves as "victims" and won't "take personal responsibility and care for their lives" is dark and distasteful and not terribly presidential.

I've found myself wondering, as the Romney campaign goes into a tailspin, whether Ryan regrets saying yes when Romney asked him to be his running mate. I'm not one of the punditocracy who thinks Ryan is a Serious Intellectual or even much of a politician, but he might have had a brighter future on his own. There's not much of a national market for used V.P. candidates who lost the election. He can talk to Dan Quayle (who admittedly won once), John Edwards, Joe Lieberman and Sarah Palin for advice.  Only one losing-ticket V.P. in American history, the extraordinary Franklin Delano Roosevelt, has gone on to be elected president. Ryan's got to know that as Romney's chances to be president evaporate, so do his.

I saw early signs of Ryan chafing at his role in a poorly run, ideologically fuzzy campaign on the eve of the Republican National Convention, when he stepped out from the Romney team's attempt to distance the ticket from Rep. Todd Akin's ugly remarks about "legitimate rape." For a while Ryan refused to discuss the fact that, like Akin, he opposes any exceptions to the abortion funding ban in cases of rape and incest, pointing instead to Romney's support for such exceptions, and insisting he would defer to the presidential candidate. But as the controversy boiled, he acknowledged his differences with the man at the top of the ticket, telling reporters, "I’ve always adopted the idea, the position, that the method of conception doesn’t change the definition of life.” Calling rape "a method of conception" wasn't likely to close Romney's gender gap, but Ryan seemed willing to step out briefly on his own. I wondered if Ryan was going rogue, but he quickly got in line at the convention.

He was a good soldier defending Romney's awful remarks on Libya and Egypt last week, pandering to his right-wing devotees at the Values Voter Summit. But Ryan has to know that Romney stepped all over his efforts to use that crass political gambit to rally the Islamophobic base, with his awful remarks about the "47 percent." Even worse, Romney has taken Ryan's pet issue – the supposed epidemic of American "dependency" encouraged by Democrats in order to win voters – and stepped on that, too. Where the GOP's white working-class base may not have understood that in Ryan's "makers" vs. "takers" formulation, he counted them among the takers, it's going to be much harder for them to ignore the meaning of Romney's insult.

When Romney introduced Ryan as his running mate, he slipped and called him "the next president of the United States." The chance that either man will be president is fading fast. It will be interesting to watch Ryan adjust to that painful reality. Judging from his remarks in Reno, he may not handle it gracefully.